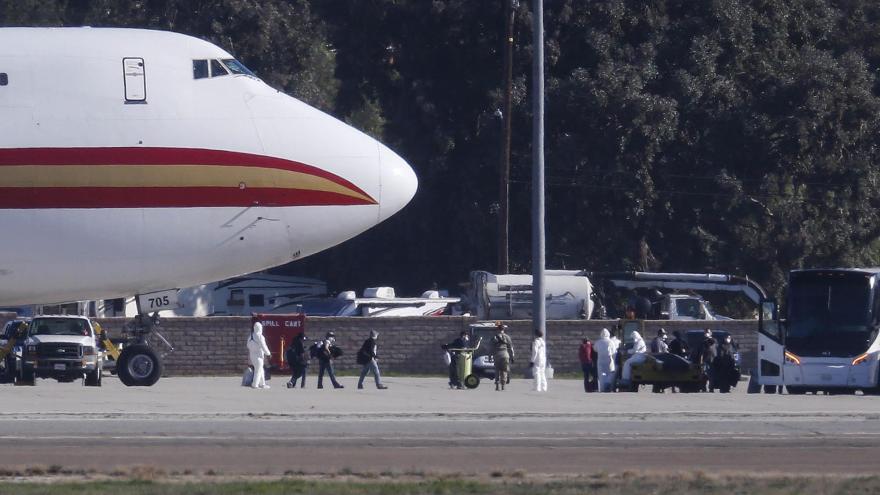 Two flights evacuating hundreds of US citizens from the epicenter of the coronavirus outbreak in China are scheduled to depart for the United States on February 4, 2020, a US official with knowledge of the matter told CNN. After the first evacuation flight for US citizens from Wuhan on January 29, passengers board buses at March Air Reserve Base in Riverside, California.

(CNN) -- Two flights evacuating hundreds of US citizens from the epicenter of the coronavirus outbreak in China are scheduled to depart for the United States soon, a US official with knowledge of the matter told CNN on Tuesday.

About 550 passengers will be aboard the two flights departing from Wuhan, China, the official told CNN on condition of anonymity. These are the second and third such flights from Wuhan that were arranged by the US government in roughly the past week.

The latest flights are expected to head to two California military bases: Marine Corps Air Station Miramar in San Diego, and Travis Air Force Base between San Francisco and Sacramento, according to the official. Details on when the flights would take off weren't immediately available.

The flights come about a week after the first US government-arranged flight left Wuhan. That first chartered plane, carrying nearly 200 US citizens -- including diplomats and their families -- arrived January 29 at March Air Reserve Base in Southern California.

The Centers for Disease Control and Prevention ordered a federal 14-day quarantine for those evacuees -- the first such order in more than 50 years.

Tuesday's flights seem to end a few days of uncertainty for the Americans who'd been seeking a way out of Wuhan. A US-arranged flight initially was to depart on Monday, but was delayed, a US official with knowledge of the matter told CNN.

The Chinese government on Monday declined to comment about the delay. But it came as Beijing criticized the United States' response to the coronavirus outbreak, including temporarily denying foreign nationals entry to the US if they had been in China in the previous 14 days.

More than 20,000 cases of Wuhan coronavirus have been confirmed worldwide, including 11 in the United States. At least 427 people have died from the virus.

Even more flights from Wuhan for US citizens could be scheduled. The State Department tweeted it "may be staging flights" on Thursday and interested citizens should contact it by email.

Americans who remain in China should take precautionary measures, including "stocking up on food," the State Department said.

California father waits to reunite with wife and children

San Diego resident Kenneth Burnett hopes that his wife and two children will be on one of Tuesday's flights, he told CNN on Monday.

His wife, Yanjun Wei, 3-year-old son Rowan, and 1-year-old daughter Mia have been holed up in a high-rise apartment in Wuhan. He was supposed to join them there to celebrate the Chinese New Year, but the outbreak shut the city down, he said.

"It's terrifying. It is very dramatic to shut down a city of 50 million people. You think to yourself, if that can happen what else can happen?" Burnett said.

The three were tentatively booked on an evacuation flight out, he said, after he contacted the State Department and the US Embassy in China for help. The children are US citizens; his wife is due to take her citizenship exam this month.

"We think my wife and kids will get seats, but they basically they won't guarantee anything. They'll say maybe the Chinese authorities won't allow it. We know that other countries have not had some of these problems. We feel like other countries haven't felt this problem," he said.