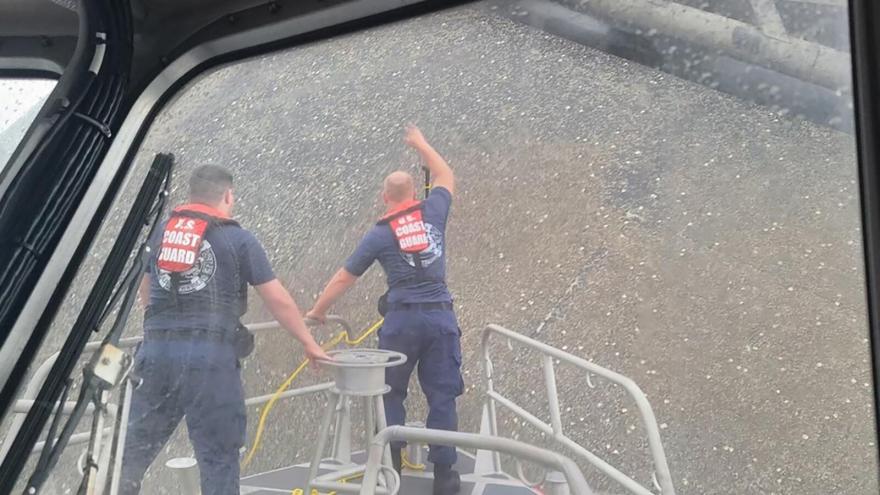 (CNN) -- The bodies of two men found inside a commercial vessel that capsized earlier this week off the Louisiana coast have been identified.

The bodies of the two men were found inside the capsized liftboat on Friday by divers contracted by Seacor Marine, the owner of the vessel, according to the US Coast Guard.

A man recovered from the water on Thursday near the capsized vessel was identified Friday as Ernest Williams, 69, of Arnaudville, Louisiana, Lafourche coroner chief investigator Jamie Folse told CNN.

On Wednesday, Coast Guard crew members found the body of David Ledet, 63, from Thibodaux, Louisiana, according to the coroner's office.

The cause of death for the four men have not yet been released.

Six people were rescued immediately after the boat capsized several miles south of Port Fourchon on Tuesday and nine people are still missing, the US Coast Guard said Friday.

The vessel with 19 crew members on board had just left Port Fourchon when it encountered a line of strong thunderstorms with winds that gusted as high as 117 mph.

The capsized vessel has been declared a major marine casualty by the Coast Guard.

According to the Code of Federal Regulations, a major marine casualty is a casualty "involving a vessel, other than a public vessel" that results in the loss of six or more lives, more than $500,000 in property damage, hazardous material threat to life, property, or the environment, or the loss of a mechanically propelled vessel at or more than 100 tons.

The Seacor Power, a 129-foot commercial liftboat, is operated by Seacor Marine. The details of where the ship was going and its mission are still under investigation. Liftboats are used to service oil platforms and other offshore assets like wind farms.