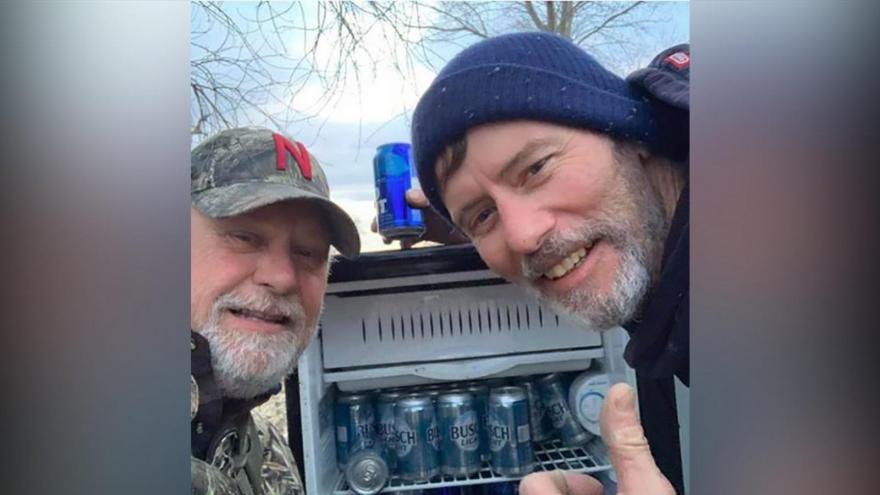 Kyle Simpson and Gayland Stouffer take a selfie with their beer discovery.

(CNN) -- Kyle Simpson and Gayland Stouffer were cleaning up after the devastating floods in Nebraska when they spotted a small black box in the distance. It just sat there, a dark contrast on a wet and muddy field.

Curious, they walked over to the box, untangled it from the soggy brush and realized it was a fridge. When they opened it, they found a stack of Busch Light beers, Simpson said.

Not just beers, but ice-cold ones, Simpson said. The kind they'd wished for after a day spent slogging through mud, washouts and waist-deep murky water in an area hit by floodwaters near the Platte River.

"It was one of those days and a bright spot in a crappy day," Simpson said.

They opened the fridge and cracked open a couple of beers. Then they took some photos and sent them to friends, some of whom posted them on Facebook, he added.

Fridge to go back to owner -- minus a few beers

Simpson said they found the fridge Sunday after spending St. Patrick's Day cleaning up flooding debris around his duck hunting lodge and bunkhouse in Butler County.

Floodwaters from last week's bomb cyclone overwhelmed levees and left a wide swath of the Midwest swamped. The flooding destroyed homes, killed crops and livestock, and cost the state hundreds of millions of dollars in damage.

At first, they were not sure the beers were real or how they had survived the wrath of the storm. "It was quite unusual to find a full fridge of beer lying in the field," Simpson said.

Hours after the Facebook post, Brian Healy, the fridge's owner, contacted them and Simpson said he promised him he'd return the fridge when the washed-out roads were accessible.

Healy said the fridge floated about 3.5 miles from their home and had previously survived a 2007 fire, according to Simpson.

Devastating floods kill crops and animals in the state

The discovery of the fridge stands out in a state hit hard by the effects of heavy snow and rain, with Nebraska Gov. Pete Ricketts calling it the "most widespread disaster" the state has ever had.

Farmers and ranchers in the Midwest have especially suffered heavy losses. Officials expect the initial farm damage tab of $400 million to crops and $400 million in lost livestock will be exceeded, Nebraska Department of Agriculture spokeswoman Christin Kamm said.

In parts of Nebraska and Iowa, farmers had little time to escape the floodwaters that rushed over their lands last week. So many left their livestock and last year's harvest behind.

Across parts of the Midwest, the flooding drowned hundreds of livestock, ruined stored grain and turned fields into lakes.