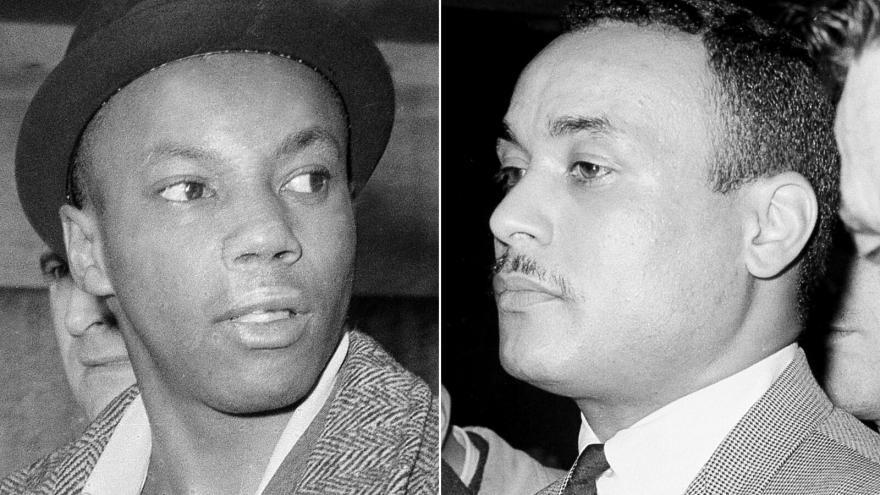 Norman 3X Butler, left, and Thomas 15X Johnson will have their convictions thrown out.

(CNN) -- Two men convicted of the 1965 assassination of Malcolm X were exonerated during a court hearing Thursday after a half-century effort to clear their names.

"I regret that this court cannot fully undo the serious miscarriages of justice in this case and give you back the many years that were lost," Biben said in her ruling.

The court erupted in applause as Biben finished her remarks.

A 22-month investigation by Manhattan District Attorney Cyrus Vance's office and lawyers for the men found that evidence of their innocence, including FBI documents, was withheld at trial.

The men were known at the time of the killing of the civil rights activist as Norman 3X Butler (Aziz) and Thomas 15X Johnson (Islam).

Aziz, 83, addressed the court Thursday, saying in part, "The events that brought us to court today should never have occurred. Those events were and are the result of a process that was corrupt to its core, one that is all too familiar to black people in 2021."

"I hope the same system that was responsible for this travesty of justice also takes responsibility for the immeasurable harm caused to me during the last 55 or 56 years," he added.

Vance apologized in court for what he called a "decadeslong injustice."

"I apologize for what were serious, unacceptable violations of law and the public trust," Vance said. "I apologize on behalf of our nation's law enforcement for this decadeslong injustice which has eroded public faith in institutions that are designed to guarantee equal protection under law. Your honor, we can't restore what was taken away from these men and their families, but by correcting the records, perhaps we can begin to restore that faith."

The New York Times first reported news of the exoneration.

Malcolm X, one of the most powerful voices in the fight against racism in the nation, took the stage at the Audubon Ballroom in New York on February 21, 1965. His wife, Betty Shabazz, and four children were in the crowd.

Not long after, shots were fired and the icon was dead.

'One of the most blatant miscarriages of justice'

A statement from the Innocence Project and lawyers for the two men said the reinvestigation "unearthed new evidence of Mr. Aziz and Mr. Islam's innocence, including FBI documents that had been available at the time of trial but were withheld from both the defense and prosecution."

The investigation found that the FBI and the New York Police Department withheld key evidence that would have likely led to their acquittal, lawyers for the two men and the Innocence Project said.

Mayor Bill de Blasio said such an action within the police department is unacceptable and he is troubled by wrongful convictions. "For millions and millions of Americans, we still need to know who killed Malcolm X and who ordered it," he said Thursday.

"The assassination of Malcolm X was a historic event that demanded a scrupulous investigation and prosecution but, instead, produced one of the most blatant miscarriages of justice that I have ever seen," said attorney Barry Scheck, a co-founder of the Innocence Project.

"Officially correcting the false historical narrative around one of the most significant events in 20th century U.S. history allows us to learn from and prevent future miscarriages of justice."

Attorney David B. Shanies said Aziz and Islam "experienced the agony of decades in prison for a crime they did not commit. They were robbed of their freedom in the prime of their lives and branded the killers of a towering civil rights leader."

Malcolm X was a fiery and iconic leader and spokesman for the Nation of Islam who denounced whites as "blue-eyed devils." But at the end of his life, Malcolm X changed his views toward whites and discarded the Nation of Islam's ideology in favor of orthodox Islam. In doing so, he feared for his own life from within the Nation.

Malcolm X remains a symbol of inspiration for Black men and others moved by his transformation from a street hustler to a historic figure the late African-American actor Ossie Davis eulogized as "our own black shining prince."

The assassination came after a public feud between Malcolm X and the Nation of Islam's founder, Elijah Muhammad. Malcolm X had accused Muhammad of infidelity and left the Nation in March 1964.

Three men were convicted in 1966. Mujahid Abdul Halim (known as Talmadge Hayer and Thomas Hagan), Aziz and Islam were sentenced to life in prison. For years, Aziz and Islam said they were innocent. Halim said he took part in the assassination, but he maintained the innocence of the other two men.

Aziz is still trying to clear his name, according to the Innocence Project. He's carried the stigma of the conviction for more than 50 years.

Halim tried to absolve Aziz and Islam of the murder when he took the witness stand on February 28, 1966, as reported by The New York Times.

"I just want to testify that Butler (Aziz) and Johnson (Islam) had nothing to do with it. ... I was there, I know what happened and I know the people who were there," Halim said.

There was no physical evidence linking Aziz or Islam to the murder of one of the most important African American figures of the 20th century, according to the Innocence Project.

Aziz also had an alibi, saying he was at home tending to his injured leg.

"The day of the murder, which was a Sunday morning, I was laying over the couch with my foot up and I heard it over the radio," Aziz remembers in the Netflix documentary series "Who Killed Malcolm X?", according to the Innocence Project.

Vance's review of the case in 2020 came after the Netflix documentary raised a slew of new questions.

The district attorney's office announced the review and said it had been working with the nonprofit Innocence Project, which seeks to exonerate the wrongly convicted.

Malcolm X's daughter Ilyasah Shabazz, in a statement at the time, said she hoped the investigation "will bring about clarity and transparency regarding this devastating, criminal act against my family and all the devoted followers of a beloved Malcolm."

"My father lived his life advocating for and in the pursuance of truth," she said. "He deserves the same dedication to truth from all of us."