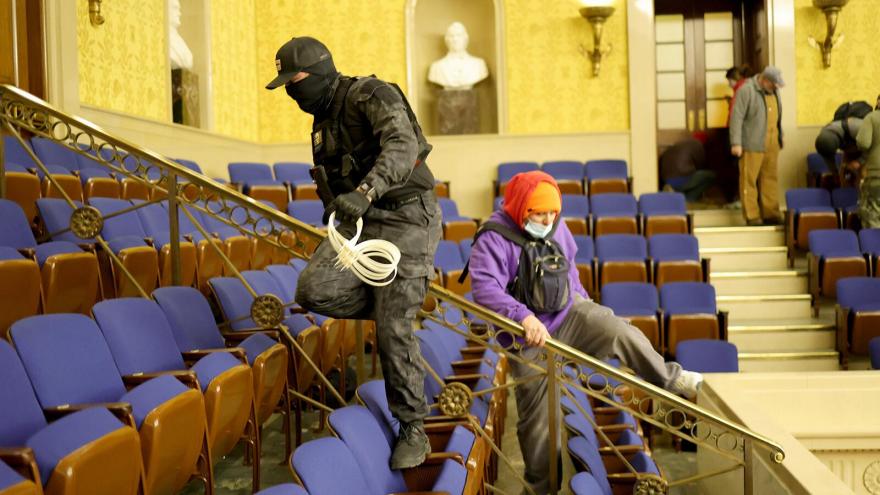 Federal authorities on Jan. 10 arrested two men who were depicted in photos of the riot inside the Capitol on Jan. 6 wearing protective armor and carrying items that could be used to restrain a person.

(CNN) -- Federal authorities on Sunday arrested two men who were depicted in photos of the riot inside the Capitol wearing protective armor and carrying items that could be used to restrain a person, according to a release.

The two men, Eric Gavelek Munchel of Tennessee and Larry Rendell Brock of Texas, a retired Air Force Reserve officer, are depicted in some of the more recognizable photos of rioters that have circulated online since the attack.

Two law enforcement officials told CNN earlier that Munchel was seen on January 6 in photos and videos that depicted him inside the US Capitol wearing black paramilitary gear and carrying plastic restraints, an item in a holster on his right hip, and a cell phone mounted on his chest with the camera facing outward, ostensibly to record events that day.

Records from the Davidson County Sheriff's Office in Tennessee show Munchel is being held on behalf of federal authorities. Munchel was charged with one count of knowingly entering or remaining in any restricted building or grounds without lawful authority and one count of violent entry and disorderly conduct on Capitol grounds.

Court records further describing Munchel's allegations were not yet available from the Justice Department Sunday night.

That information was later confirmed by officials in a release, which detailed the arrest of a second suspect.

Authorities also arrested Brock of Texas. Brock was identified as one of the individuals who unlawfully entered the Capitol wearing a green helmet, green tactical vest with patches, black and camo jacket, and beige pants holding a white flex cuff, which is used by law enforcement to restrain and/or detain subjects, according to a court document supporting his arrest.

Brock was charged with one count of knowingly entering or remaining in any restricted building or grounds without lawful authority and one count of violent entry and disorderly conduct on Capitol grounds.

In an affidavit made public by the Department of Justice on Sunday, authorities described how two tipsters helped to identify Brock. One witness who said she was Brock's ex-wife called the FBI on January 8 to identify him, after seeing him in a photo that had gone viral, according to court documents.

"I just know that when I saw this was happening I was afraid he would be there. I think you already know he was there. It is such a good picture of him and I recognize his patch," the woman told investigators, according to details in the sworn affidavit.

A second person also recognized him and had phoned the FBI. Lt. Colonel Brock was an Admissions Liaison Officer in the Air Force, according to his military record.

He served as an A-10 pilot until 2007 and retired in 2014. The military said that as a private citizen, it no longer has jurisdiction over him.

This story has been updated with addition information Sunday.