Two killed and eight injured in shooting in downtown Minneapolis 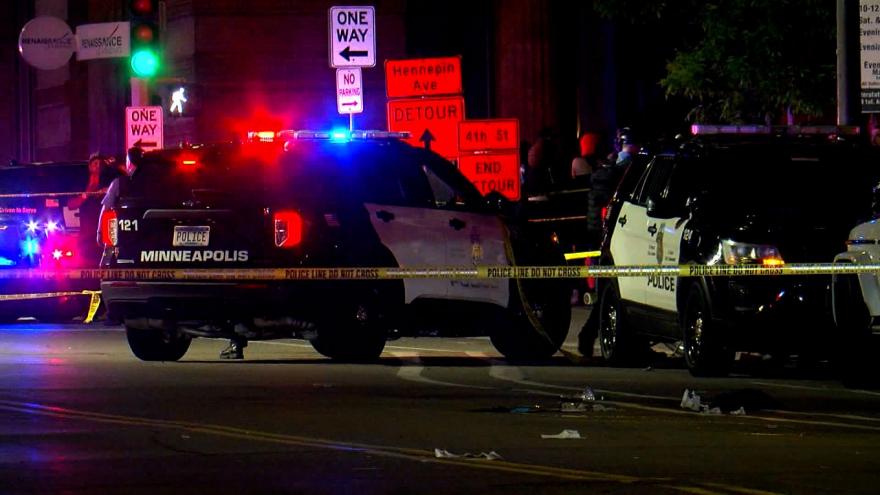 (CNN) -- Two men were killed and eight other people were injured in a shooting early Saturday in downtown Minneapolis, police said.

Seven of the victims were taken to hospitals with non-life-threatening injuries and one man was in critical condition, according to the Minneapolis Police Department (MPD).

Jail records did not list an attorney for Carroll, and he had not been formally charged as of Saturday evening.

"He is the only suspect," Elder said.

Elder said police believe the other shooter was one of the two men killed.

A verbal confrontation likely led to the shooting, police said.

Two people standing in a crowded area on North First Avenue argued, pulled out guns and began shooting at each other, police said.

Officers working "evening bar close" at around 2 a.m. heard the gunshots and ran toward the gunfire, police said. They arrived at an "exceptionally chaotic scene" where two men had already died from their injuries.

"These brazen senseless acts of gun violence must stop. The perpetrators of these crimes should never find refuge or anonymity in our communities," Minneapolis Police Chief Medaria Arradondo said in a written statement Saturday.

Of the 10 adults shot, five were male and five female, according to police.

The names of the victims as well as the nature and cause of death will be released by the medical examiner in the coming days, police said in a statement.

One of the two people killed had been scheduled to graduate later that day from the University of St. Thomas in St. Paul, according to the school. The university identified the victim as Charlie Johnson, a mechanical engineering student.

"Our community is shocked and saddened by the news of Charlie's death. We grieve with his family and friends and pray for their comfort," university president Julie Sullivan said in a written statement. "On a day he and his family should have been celebrating his graduation from our School of Engineering, we are devastated by this loss."

The university says Johnson was remembered at the school's commencement ceremonies Saturday, and a family member accepted his diploma posthumously.