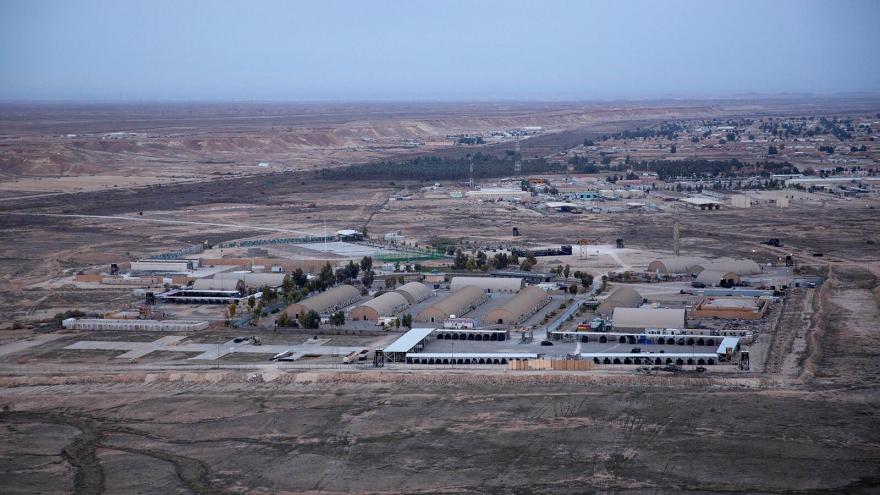 Two people were injured July 7 in a rocket attack targeting the al-Asad airbase in Iraq which hosts US, Iraqi, and coalition forces, a coalition spokesperson said.

(CNN) -- Two US service members were injured Wednesday in a rocket attack targeting the al-Asad airbase in Iraq which hosts US, Iraqi, and coalition forces.

Col. Wayne Marotto, the spokesman for Operation Inherent Resolve, tweeted that the airbase was attacked by 14 rockets which landed on the "base & perimeter" and that "Two personnel sustained minor injuries."

A Pentagon spokesperson later confirmed that the service members injured were American.

"I can confirm two US service members had the minor injuries in today's attack at Al Asad Air Base, Iraq," Pentagon Spokesperson Commander Jessica McNulty said.

Damage from the attack is still being assessed at the airbase, which is one of the largest and oldest military bases in the country.

Sharhabil al-Obaidi, the mayor of al-Baghdadi in Anbar province, told CNN that the coalition responded to the source of the launch and struck a vehicle from which the rockets were launched near the town of al-Baghdadi. Al-Obaidi said several rockets hit Iraqi army posts inside the airbase but could not provide further details.

Security officials in the town of al-Baghdadi told CNN that a house nearby the launcher was damaged in the coalition airstrike, but no casualties were reported.

The Iraqi military said in a statement that the rocket launcher also caused damage to several houses and a nearby mosque after several rockets on its board exploded.

Diplomatic missions, he said, are under the protection of the state and any attack against them are "a flagrant violation of all laws, and an attack on the prestige of the state and its international commitments."

No casualties were reported, but the attack caused some minor damages, officials said.

The first rocket hit a yard near the headquarters of the National Security Agency, and the second rocket hit Grand Festivities Square. Both are located inside the Green Zone and close to the US embassy. The third rocket hit a residential area.

No group has claimed responsibility for Wednesday or Thursday's rocket attacks, but Iran-backed militias in Iraq vowed revenge following US airstrikes on the Iraqi-Syria border region last month.

On Wednesday afternoon, State Department spokesperson Ned Price suggested that recent rocket attacks on bases in Iraq were carried out by Iran-backed militias but noted that he "wouldn't want to prejudge investigations that are ongoing."

"As we have said in the context of attacks that have taken place in recent months, they have been carried out by Iran-backed militias and President Biden in turn has responded, responded in different ways but of course, perhaps most visibly by authorizing the military strikes most recently, late last month but also, before that as well on Iran-backed militia infrastructure in Iraq and Syria," he said at a briefing.

"I wouldn't want to speak to the motivation of these attacks. I will say that what we recognize is that these attacks reflect and are representative of the threat that Iran-backed militias present fundamentally to Iraq's sovereignty, and to Iraq's stability," he added.

On Sunday, June 27, President Joe Biden directed military forces to conduct the defensive precision airstrikes on Iranian-backed militias, the second time in his presidency he has chosen to use force in the region. The US airstrikes followed a recent spate of attacks against US military assets in Iraq by a new class of Iranian-made drones that US officials say can evade US surveillance and defenses.

The American airstrikes that night hit operational and weapons storage facilities at two locations in Syria and one in Iraq, according to Pentagon press secretary John Kirby, targets that were "selected because these facilities are utilized by Iran-backed militias that are engaged in unmanned aerial vehicle (UAV) attacks against US personnel and facilities in Iraq."

"As demonstrated by this evening's strikes, President Biden has been clear that he will act to protect US personnel. Given the ongoing series of attacks by Iran-backed groups targeting US interests in Iraq, the President directed further military action to disrupt and deter such attacks," Kirby said in a news release at the time.

At least four Iran-backed militia fighters in Iraq and Syria were killed in those airstrikes, Iraqi militia said in a statement.