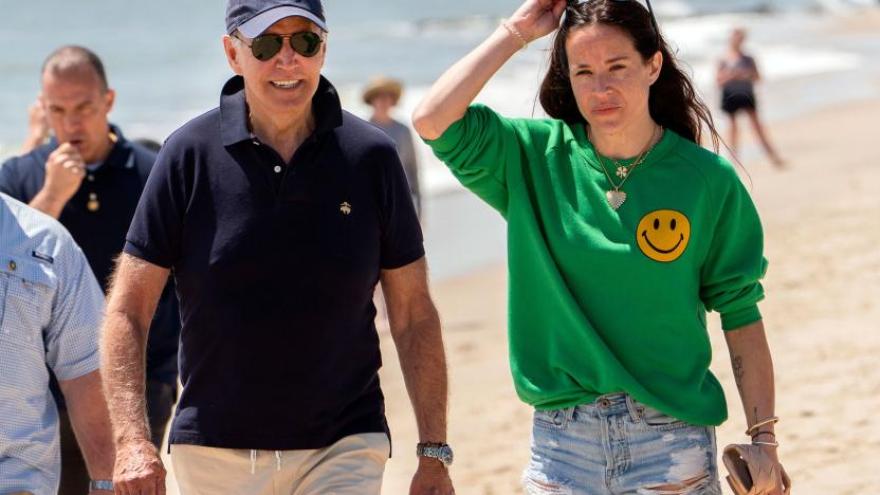 Aimee Harris and Robert Kurlander pleaded guilty to stealing Biden's belongings and selling them to the conservative media group for $40,000, according to court documents.

In September 2020, Harris moved into a Delray Beach, Florida, home where the daughter of now-President Joe Biden had recently lived and temporarily stored some personal belongings. Harris solicited Kurlander's help to sell Biden's valuables to the highest bidder, according to the criminal information.

The pair attended a Donald Trump fundraiser on September 6, 2020, hoping to arrange a sale to the then-President's campaign.

According to the documents filed Thursday, Kurlander texted Harris after the event saying, "[Trump] campaign can't use it. They want it to go to the FBI. There is NO WAY [Trump] can use this. It has to be done a different way..."

Days later, they sent photos of some of Biden's belongings to Project Veritas. The organization paid for airfare, hotel, and a car service for the pair to transport the property from Florida to New York City, according to the court documents.

Kurlander acknowledged the crime in a text to Harris, saying that Project Veritas is in a "sketchy business," the court documents show.

"They are in a sketchy business and here they are taking what's literally a stolen diary and info . and trying to make a story that will ruin [Ashley Biden's] life and try and effect the election. [Ashley Biden] can easily be thinking all her stuff is there and not concerned about it. . we have to tread even more carefully and that stuff needs to be gone through by us and if anything worthwhile it needs to be turned over and MUST be out of that house," the text message said.

No one from Project Veritas has been publicly charged in connection to the alleged scheme.

Harris and Kurlander pleaded guilty to one count of conspiracy to commit interstate transportation of stolen property, which carries a maximum sentence of 5 years in prison, according to sentencing guidelines, but a judge will ultimately decide their sentence. They are not being held, pending their sentencing later this year.

Harris "accepted responsibility for what happened and she's looking forward to moving on with her life," her attorney Sanford Talkin told CNN.

CNN reached out to an attorney for Kurlander but did not immediately hear back.

In a statement released Thursday about the guilty pleas, Project Veritas said their employees' news gathering was "ethical and legal," adding: "A journalist's lawful receipt of material later alleged to be stolen is routine, commonplace, and protected by the First Amendment."

CNN has reached out to representatives for Biden for comment.