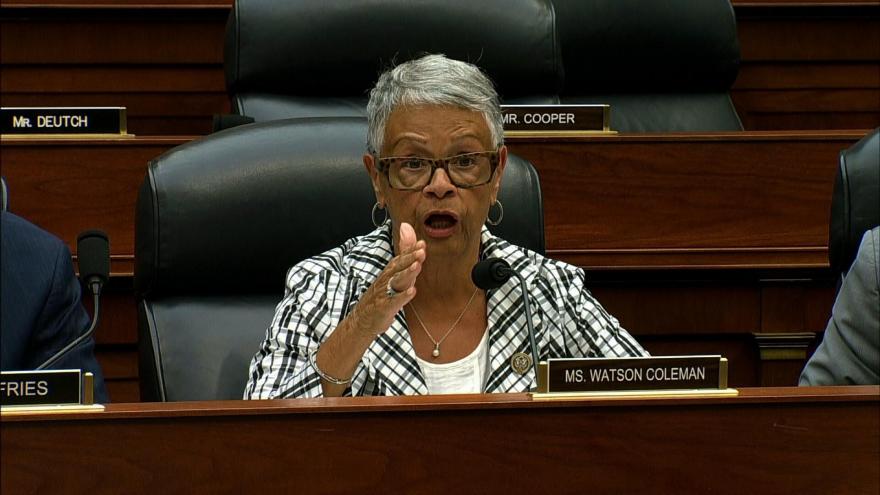 Rep. Bonnie Watson Coleman, a New Jersey Democrat, said on January 11 that she has tested positive for Covid-19, and she blamed fellow members of Congress.

(CNN) -- House Democrats plan on setting up a system to fine members who don't wear masks on the House floor after three Democrats said they tested positive for Covid-19 after sheltering in place with other members of Congress who did not wear masks during the violent attack on the US Capitol last week.

A senior House Democratic aide told CNN on Tuesday that a procedural vote on the resolution calling on Vice President Mike Pence and the Cabinet to use the 25th Amendment to remove President Donald Trump from office will also include the fine system. Speaker Nancy Pelosi has required that masks be worn on the floor, but those rules are occasionally flouted by some House Republicans.

There will be a $500 fine for a first offense and a $2,500 fine for a second offense. The fines will be deducted from lawmakers' pay, the aide said.

"Following the events of Wednesday, including sheltering with several colleagues who refused to wear masks, I decided to take a Covid test. I have tested positive," Coleman tweeted Monday.

A statement from her office said that the congresswoman "believes she was exposed during protective isolation in the US Capitol building as a result of insurrectionist riots. As reported by multiple news outlets, a number of members within the space ignored instructions to wear masks."

Jayapal tweeted early Tuesday morning that she "received a positive COVID-19 test result after being locked down in a secured room at the Capitol where several Republicans not only cruelly refused to wear a mask but recklessly mocked colleagues and staff who offered them one."

CNN has previously reported that six House Republicans were captured on video refusing masks offered by a colleague during the US Capitol insurrection.

An aide told CNN that Watson Coleman was in the room in the secure location with the six conservative Republicans who refused to wear masks.

"Unfortunately, I received a positive COVID-19 test this morning following being tested yesterday on the advice of the House Attending Physician," Schneider said in a statement Tuesday.

"Last Wednesday, after narrowly escaping a violent mob incited by the President of the United States to attack the Capitol and its occupants, I was forced to spend several hours in a secure but confined location with dozens of other Members of Congress. Several Republican lawmakers in the room adamantly refused to wear a mask," the congressman said.

"Today, I am now in strict isolation, worried that I have risked my wife's health and angry at the selfishness and arrogance of the anti-maskers who put their own contempt and disregard for decency ahead of the health and safety of their colleagues and our staff. I am at least the third Member from that room paying the price, including Rep. Pramila Jayapal and Rep. Bonnie Watson Coleman, a 75-year-old cancer survivor," he said.

Democratic Reps. Debbie Dingell of Michigan and Anthony Brown of Maryland introduced a bill on Tuesday that would impose $1,000 fines on any lawmakers who refuse to wear a mask on Capitol grounds amid the pandemic.

"We're done playing games. Either have some common sense and wear a damn mask or pay a fine. It's not that complicated," Dingell said in a statement.

Lawmakers and Capitol staff on Sunday received a memo from the Capitol's attending physician warning of a possible risk of Covid-19 exposure after a large group of lawmakers were forced to gather in a secure location during the breach of the US Capitol.

"On Wednesday January 6, many members of the House community were in protective isolation in (a) room located in a large committee hearing space. The time in this room was several hours for some and briefer for others. During this time, individuals may have been exposed to another occupant with coronavirus infection," Dr. Brian P. Monahan wrote.

In the memo, Monahan instructed lawmakers and staff to monitor for possible Covid-19 symptoms and to be tested for Covid-19 as a precaution.