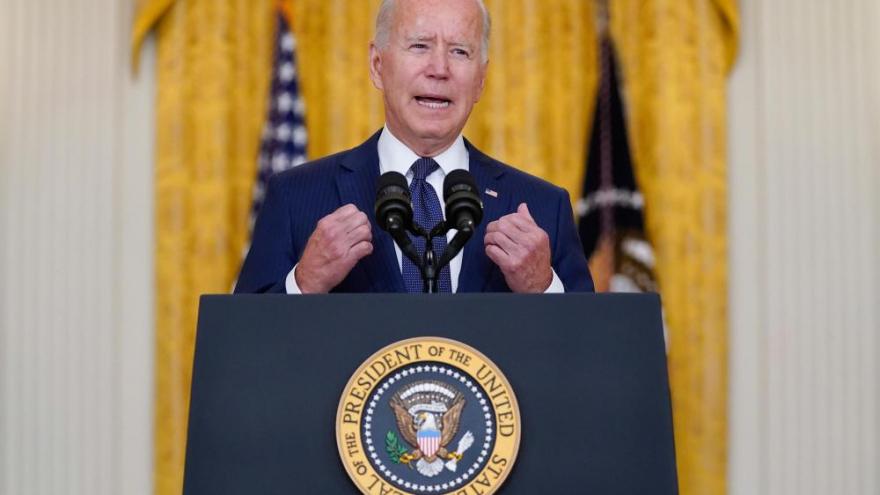 President Joe Biden speaks about the bombings at the Kabul airport that killed at least 12 U.S. service members, from the East Room of the White House, Thursday, Aug. 26, in Washington.

(CNN) -- Another terrorist attack on Kabul's airport is "highly likely in the next 24-36 hours," President Joe Biden said Saturday, citing US military commanders, while hours later, the US Embassy in Kabul issued a security alert.

"Due to a specific, credible threat, all U.S. citizens in the vicinity of Kabul airport (HKIA), including the South (Airport Circle) gate, the new Ministry of the Interior, and the gate near the Panjshir Petrol station on the northwest side of the airport, should leave the airport area immediately," the alert read.

Biden's Saturday afternoon statement came hours after the Pentagon said two "high profile" ISIS targets were killed and another was injured in a US drone strike in Afghanistan, a retaliatory step following the terrorist attack that killed 13 US service members and at least 170 others outside the airport on Thursday.

"This strike was not the last," Biden said in his statement. He vowed to "hunt down any person involved in that heinous attack and make them pay."

"The situation on the ground continues to be extremely dangerous, and the threat of terrorist attacks on the airport remains high," Biden said, adding that he has asked commanders to "take every possible measure to prioritize force protection."

The Pentagon addressed the drone strike earlier in the day.

"I can confirm, as more information has come in, that two high-profile ISIS targets were killed, and one was wounded. And we know of zero civilian casualties," Maj. Gen. Hank Taylor, deputy director of the Joint Staff For Regional Operations, said in a news conference. "Without specifying any future plans, I will say that we will continue to have the ability to defend ourselves and to leverage over-the-horizon capability to conduct counterterrorism operations as needed."

"Our commanders informed me that an attack is highly likely in the next 24-36 hours," Biden said in his statement. "I directed them to take every possible measure to prioritize force protection, and ensured that they have all the authorities, resources and plans to protect our men and women on the ground."

Pentagon spokesperson John Kirby said all the targets were hit in a single strike, and that they were "ISIS-K planners and facilitators."

A US defense official told CNN earlier Saturday that one of the individuals was believed to be "associated with potential future attacks at the airport." The US located him and "had sufficient eyes on and sufficient knowledge" to strike, the official said, adding that he "was a known entity" but that the US is not calling him a "senior" ISIS-K operative.

The individual was in a compound in the Jalalabad area, another defense official told CNN, and new intelligence following the terrorist attack in Kabul was firmed up to give justification for the strike. The source said surveillance continued on the compound until the target's wife and children left before the US conducted the targeted drone strike.

"I'm not going to talk about specific capabilities ISIS may have lost in this strike. They lost a planner, and they lost a facilitator. And they have one wounded. The fact two of these individuals are no longer walking on the face of the Earth, that's a good thing," Kirby said Saturday.

An Afghan journalist who visited the scene of the drone strike said it destroyed a house close to Jalalabad in eastern Afghanistan. Photos shared with CNN by the journalist show a small vehicle at the compound badly damaged as well as what appears to be heavy shrapnel damage in the immediate vicinity.

According to locals in the area of the strike, at least three people were killed -- a man, woman and child -- and several others injured.

Several locals, who spoke to Afghan journalists who shared the information with CNN, said the attack had happened at about 2 a.m. local time. One man said: "We saw that rickshaws were burning. Children and women were wounded and one man, one boy and one woman had been killed on the spot. We tried to find people to bring something so that we can carry or transport the wounded."

He said eventually "two rickshaws came and we transported the wounded in that. And then beyond the police headquarters an ambulance arrived and the Taliban arrived and then we carried the dead."

Another neighbor said the occupants of the house were from a nearby township, Batikot, and had been living in the area for less than three months. "They were not keeping close contact with anyone in the area," he said. "One was operating a rickshaw and the other was working in a bakery. Among them were two men whom we had never seen before."

Another man said: "There were dead bodies lying and a fire was burning. People put out the fire and removed the wounded."

The journalists who visited the site said they were told two families were living in the compound. They said the area had been blocked off until late Saturday afternoon and no one could enter the site.

The announcement of the drone strike came a day after Biden vowed to retaliate for the terrorist attack in Kabul, even as he said the frantic mission to airlift Americans from Afghanistan would continue. Biden approved the strike on the ISIS-K planner, according to an official familiar with the matter.

ISIS in Khorasan, known as ISIS-K, has claimed that an ISIS militant carried out Thursday's suicide attack, but provided no evidence to support the claim. US officials have said the group was likely behind the bombing.

Final days of the evacuation

Biden and his team are now bracing for the possibility of another terrorist attack in the final days of the evacuation operation.

Kirby announced Saturday that the US military had begun departing from the airport, but confirmed the August 31 departure deadline still stood.

"Make no mistake, nobody is writing this off and saying: 'Well, we got them, so we don't have to worry about ISIS-K anymore.' Not the case. As I said earlier, the threat stream is still active, still dynamic. We're still laser focused on that and force protection. We aren't thinking for a minute that what happened yesterday gets us in the clear. Not a minute," Kirby said.

"But do we believe that we hit valid targets, bad guys who can do bad things and plan bad missions? Absolutely. Do we think that will have some impact on their ability going forward? Absolutely."

Around 6,800 people were evacuated by US and coalition flights in the preceding 24 hours, according to a White House official Saturday morning. The latest numbers are noticeably smaller than those from recent days, something the White House has said should be expected in the final days of the mission.

The department also said it has communicated with roughly 280 additional individuals who self-identified as Americans but who have not told the department of their plans to leave the country, or who have said they do not intend to leave at all.

About 5,400 Americans have been evacuated since August 14, the Defense Department said Saturday.

Overall, the US has evacuated or facilitated the evacuation of about 111,900 people since August 14, according to the White House official.

A source directly familiar with the situation at the airport Saturday said only a skeletal US diplomatic crew of staff to process evacuees would remain after the bulk expected to be departed in the following 24 hours. The source added it was unclear if the evacuation of local embassy employees had finished, but that hundreds more had been reported as having made it to the airport and that "hundreds more have departed for interim locations."