Two gravestones with swastikas removed from veterans cemetery in Texas 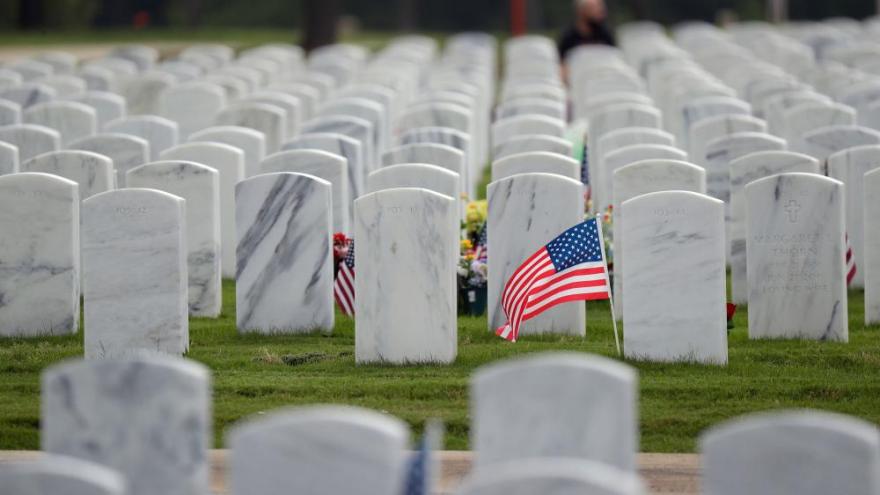 A flag waves in a sea of headstones at the Fort Sam Houston National Cemetery in San Antonio on May 21, 2020.

(CNN) -- Two headstones inscribed with Nazi swastikas that mark the graves of German prisoners of war have been removed from a veteran's cemetery in Texas.

The headstones at Fort Sam Houston National Cemetery in San Antonio feature an iron cross with a swastika at its center, along with an inscription in German that reads: "He died far from his home for the Leader (Führer), people and fatherland." The headstones mark the graves of Pvt. Georg Forst and Pvt. Alfred P. Kafka, two POWs who died in Texas in 1943.

Besides the two graves in San Antonio, a headstone at Fort Douglas Post Cemetery in Salt Lake City features an Iron Cross with an inscribed swastika. The headstone of German POW Paul Eilert was purchased by his fellow POWs after he died in 1944 using money from their 50 cents a day allowance, according to the VA.

According to the VA, the original headstones for Kafka and Forst were likely altered between their placement at the camp between 1943 and 1946-1947, when the remains and headstones were relocated to Fort Sam Houston National Cemetery and the inscription was added.

Earlier this year, members of Congress called on federal officials to take down or alter the headstones at two national cemeteries that contain swastikas.

In a May 25 letter to Veteran Affairs secretary Robert Wilkie, the group of House lawmakers wrote that allowing the headstones "with symbols and messages of hatred, racism, intolerance, and genocide is especially offensive to all the veterans who risked, and often lost, their lives defending this country and our way of life."

"It is also a stain on the hallowed ground where so many veterans and their families are laid to rest," the lawmakers wrote. "Families who visit their loved ones, who are buried in the same cemeteries with the Nazi soldiers whom they fought against, should never have to confront symbols of hatred that are antithetical to our American values."

The headstones have been standing for decades

The headstones have stood in the cemeteries for decades, but were brought to attention earlier this year after the Military Religious Freedom Foundation (MRFF) called for them to be replaced.

Mikey Weinstein, the founder and president of MRFF, said in a news release in May that a retired senior military officer alerted his organization to the headstones after he visited the graves of family members at Fort Sam Houston National Cemetery.

"In light of the shocking and inexcusable existence of these Nazi-adorned gravesites in V.A. National Cemeteries, MRFF demands that Secretary Wilkie issue an immediate and heartfelt apology to all United States veterans and their families," Weinstein, Air Force veteran and founder and president of MRFF, said in the news release.

Other advocacy groups, including the Southern Poverty Law Center, echoed calls to remove the gravestones.

In May, the VA said it was aware of the headstones, which date back to the 1940s and were approved by the US Army. At that time, the department said it would not remove them because it was obligated by law to preserve historical artifacts.

"The National Historic Preservation Act of 1966 assigns stewardship responsibilities to federal agencies, including VA and Army, to protect historic resources, including those that recognize divisive historical figures or events," the department said in a statement to Salon.com. "For this reason, VA will continue to preserve these headstones, like every past administration has."

In June, the Jewish War Veterans of the United States, who worked with MRFF, announced that VA officials had reversed course and were starting the process of removing the "offensive headstones and replacing them with appropriate markers."

A time frame for completion was not announced and no other information about the removal of the Utah headstone was provided.