Two Florida teens prayed for help after being swept out to sea during a swim. A boat called the 'Amen' came to save them 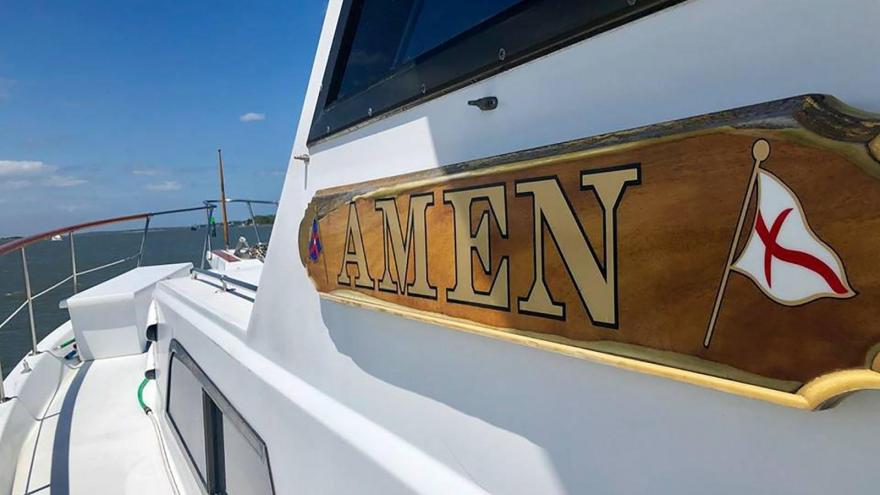 The "Amen" was sailing from Florida to New Jersey when it rescued two teenagers almost 2 miles off shore.

(CNN) -- When Eric Wagner bought the "Amen" six years ago, he had no way of knowing the boat would be the actual answer to two Florida teenagers' prayers.

Wagner and his crew were sailing the 53-foot yacht from Delray Beach, Florida, to New Jersey last month when they heard "a desperate scream" over the engines, wind and choppy waves.

They were about 2 miles off shore, so Wagner didn't believe his ears at first.

Then they saw an arm flailing in the water behind them.

"It was kind of surprising we heard them. Especially when they were 150 yards away, almost 200 yards away," he said. "But it was definitely the scream that we heard, and that's why we were looking around."

They turned the boat around and raced to get close enough to throw life jackets and a line.

Tyler Smith and Heather Brown were shivering uncontrollably and could barely talk.

Smith and Brown told CNN affiliate WJAX they had been in the water for almost two hours before they were rescued.

The 17-year-olds had gone swimming at Vilano Beach, near St. Augustine, to celebrate senior skip day and got caught in a current that pulled them father and farther away from land.

They were getting weaker and feared they wouldn't make it, so they started praying.

"I cried out, 'if you really do have a plan for us, like, come on. Just bring something.'" Smith told WJAX.

That's when they saw the "Amen."

"The first words that came out of my mouth [when they pulled her aboard] were, 'God is real,'" Brown told WJAX.

Wagner said they thought the teens might have hypothermia, so they covered them with towels, blankets and comforters and microwaved cups of water for them to drink.

"Within 10 minutes of getting them on the boat, they were back to normal and talking normally," he said. They called the Coast Guard and were able to get Brown and Smith to a rescue boat after 30 or 40 minutes.

Wagner said the rescue has strengthened his faith.

"There were too many coincidences, in my opinion, for this to be a coincidence," he said. "I truly believe it was divine intervention. It had nothing to do with me. I was just put there at the right place at the right time and I did the same thing anyone else would have done, pulled them aboard."

Wagner said he plans to restore the boat, and had been thinking about changing the name, but that's off the table now.

"Definitely not, I'll keep that name, 'Amen,' forever," he said.