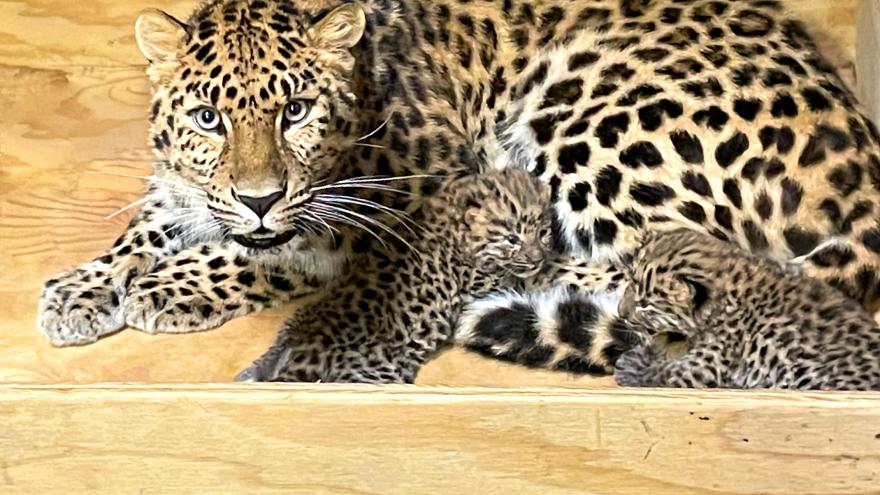 Amur leopards are thought to be the world's rarest big cat, with around 120 left in the wild in Russia and China, according to the World Wildlife Fund (WWF).

The zoo, located in St. Louis, announced the exciting birth on May 19 via Twitter. The female cubs were born on April 21 to lucky parents Dot and Samson, said the zoo. Dot arrived at the zoo in 2020. She and the cubs will stay in a private maternity den for the next few months.

"Dot is an excellent mother. It's exciting to see this first-time mom providing great care to her cubs," said carnivores curator Steve Bircher in a news release.

"There are so few of these rare big cats left in the world and each birth is extremely important for the survival of the species."

The 4-year old Samson came to the zoo in 2021. Visitors can still catch a glimpse of Samson at the zoo's "Big Cat Country" exhibit. The pair were linked by the Association of Zoos and Aquariums, which matches Amur leopards strategically to cultivate a genetically healthy population in north American zoos.

The cubs had their first veterinary checkup on May 5. Each weighed in at a healthy 2.5 pounds, said the zoo. By the time they're fully grown, Anya and Irina will weigh in anywhere between 60 and 125 pounds.

Amur leopards have been driven to the brink of extinction, says the WWF, although conservation work has helped to raise their numbers. Their population has declined dramatically due to habitat loss and hunting.