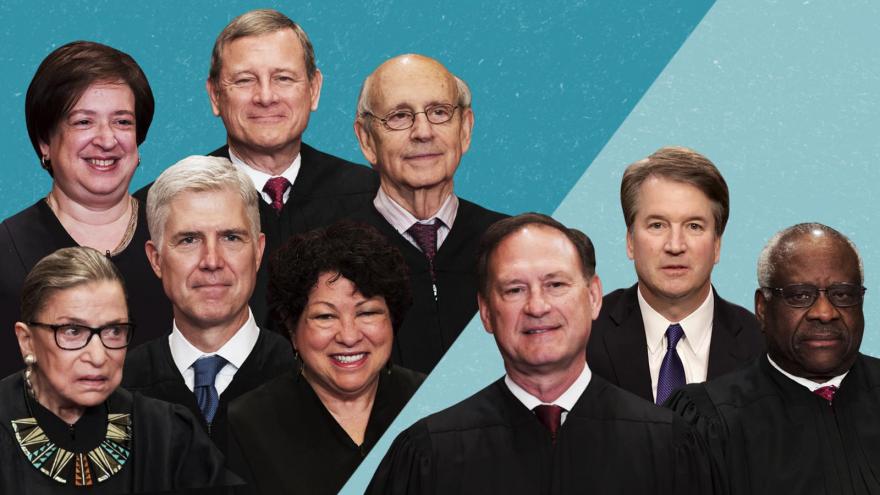 Five years after the US Supreme Court declared a fundamental right for same-sex couples to marry, the justices produced another landmark for the gay rights movement by ruling that federal anti-bias law covers millions of gay, lesbian and transgender workers.

(CNN) -- Five years after the US Supreme Court declared a fundamental right for same-sex couples to marry, the justices produced another landmark for the gay rights movement by ruling that federal anti-bias law covers millions of gay, lesbian and transgender workers.

Monday's decision came at the hands of an unusual six-justice coalition on the nine-member bench, cloaked in legalistic, textualist reading of the statute but nonetheless reflecting a cultural transformation in America.

The ruling joins the annals of high court decisions over the last quarter century that have helped drive gay progress on myriad fronts, including the 2003 decision striking down statutes that criminalized sodomy and a 2013 action that invalidated a federal law that denied married same-sex couples the Social Security and other benefits given opposite-sex married couples.

Even with a newly cemented conservative majority, it appears the high court will continue moving forward on LGBTQ rights. There is still a question of how such rights will fare when religious objections emerge or questions about shared locker rooms and bathrooms are invoked in a transgender dispute -- issues Monday's opinion specifically did not address.

The 6-3 decision was written by Justice Neil Gorsuch, President Donald Trump's first high court appointee and an unyielding conservative on most disputes.

Equally significant, the decision was joined by Chief Justice John Roberts, who had never signed an opinion endorsing gay rights.

The legal milestone mirrors cultural changes and brings LGBTQ rights into a new realm of the law. While the 2015 decision finding a right to same-sex marriage marked a climax in domestic life, Monday's decision ushers in equality on the job.

The majority ruled that Title VII of the 1964 Civil Rights Act, which prohibits discrimination "because of" sex, extends to people who face job bias arising from their sexual orientation or gender identity.

Gorsuch said the "message" of the law is "simple and momentous: An individual's homosexuality or transgender status is not relevant to employment decisions. That's because it is impossible to discriminate against a person for being homosexual or transgender without discriminating against that individual based on sex."

More than 7 million people in the US identify as lesbian, gay, bisexual or transgender, according to the Williams Institute at UCLA. Of those, about 4 million currently live in states where laws do not protect workers from discrimination based on sexual orientation or gender identity.

As much as Gorsuch's vote has dismayed conservatives on the court and off, the vote of Roberts, also usually on the right wing, was not predictable.

In his 15 years as chief justice, Roberts' dissent in the 2015 gay marriage case marked his first and only oral dissent from the bench.

Roberts argued then that the majority had put itself in the role of an elected legislature and ignored the limits of the Constitution. Roberts went so far as to compare it to the Dred Scott ruling of 1857 that said blacks could not be citizens.

"If you are among the many Americans -- of whatever sexual orientation -- who favor expanding same-sex marriage," Roberts also wrote at the time, "by all means celebrate today's decision. Celebrate the achievement of a desired goal. ... Celebrate the availability of new benefits. But do not celebrate the Constitution. It had nothing to do with it."

The three dissenters on Monday similarly criticized the majority for encroaching on what they said was the domain of legislators, not judges.

Justice Brett Kavanaugh, dissenting, tried to emphasize that he was not against gay rights and noted the historic nature of the decision. But Kavanaugh was not going to be part of it.

"This Court has previously stated, and I fully agree, that gay and lesbian Americans 'cannot be treated as social outcasts or as inferior in dignity and worth.' But we are judges, not Members of Congress."

Not a new liberal court

The 6-3 ruling should not be taken as a sign of a new liberal court. Rather, it is a reflection of kind of cross-ideological consensus that can emerge when individual conservative justices have specific interests that align with those of the four liberal justices.

That type of pattern tends to be specific to the subject at hand, perhaps influenced by a national atmosphere and trends.

One LGBTQ rights test on the horizon will come next session in a case from Philadelphia. It centers on foster-care agencies that will not accept same-sex parents on religious grounds.

The Trump administration had argued against Monday's outcome, and the ruling may have seemed improbable after the 2018 retirement of Justice Anthony Kennedy, who had been the author of all gay rights opinions dating to 1996 and was often the deciding vote on a bench riven on the cultural dilemma.

Unlike the 2015 marriage case rooted in constitutional protections, Monday's trio of disputes, consolidated as Bostock v. Clayton County, involved a statutory interpretation. They were brought on behalf of two gay men fired from their jobs, as a skydiving instructor and a child welfare services coordinator, and on behalf of a transgender woman who lost her position as a funeral home director.

The employers argued that firing gay or transgender individuals did not violate Title VII.

As the court majority ruled otherwise, Gorsuch avoided the often-elevated tone of Kennedy's decisions and in his 33-page explication focused on a close reading of Title VII. In adhering to his textual conservatism, Gorsuch said the words of the statute and its focus on "individuals, not groups" lead to a single interpretation.

He acknowledged that Congress likely would not have anticipated Monday's result when it passed the law in 1964, but he said the prohibition on discrimination "because of sex" necessarily covers people who face bias because of they are gay, lesbian or transgender.

"When the express terms of a statute give us one answer and extratextual considerations suggest another," Gorsuch wrote, "it's no contest. Only the written word is the law, and all persons are entitled to its benefit."

That Gorsuch wrote the opinion was no accident. Roberts, as the senior justice in the majority, had the authority to choose who would write for the court. He selected the conservative textualist, rather than himself or any one of the four liberals: Justices Ruth Bader Ginsburg, Stephen Breyer, Sonia Sotomayor and Elena Kagan.

In his dissenting opinion, Alito, joined by Thomas, scoffed at Gorsuch's approach, contending he "attempts to pass off its decision as the inevitable product of the textualist school of statutory interpretation championed by our late colleague Justice (Antonin) Scalia, but no one should be fooled.

"The Court's opinion is like a pirate ship. It sails under a textualist flag, but what it actually represents is a theory of statutory interpretation that Justice Scalia excoriated -- the theory that courts should 'up-date' old statutes so that they better reflect the current values of society," Alito added.

Gorsuch argued that he was doing the opposite, interpreting the words as written in 1964.

"Ours is a society of written laws," Gorsuch concluded. "Judges are not free to overlook plain statutory commands on the strength of nothing more than suppositions about intentions or guesswork about expectations. In Title VII, Congress adopted broad language making it illegal for an employer to rely on an employee's sex when deciding to fire that employee. We do not hesitate to recognize today a necessary consequence of that legislative choice: An employer who fires an individual merely for being gay or transgender defies the law."