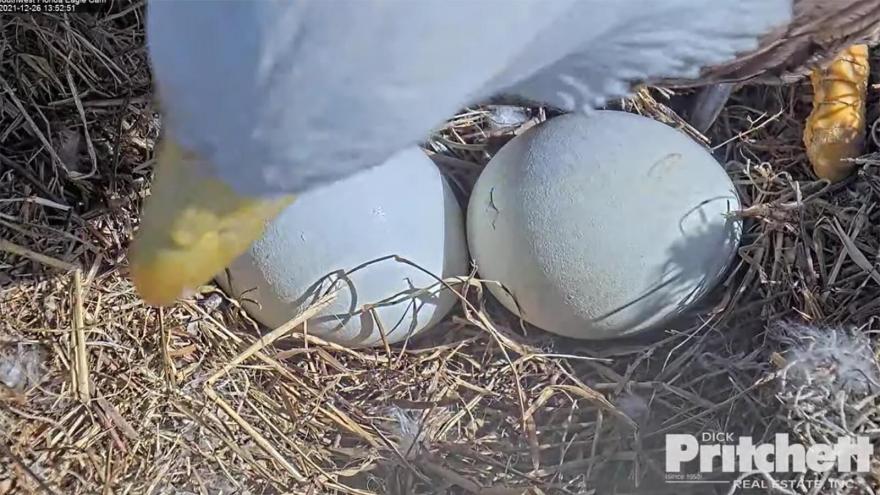 A pair of Florida bald eagle eggs are expected to hatch soon.

(CNN) -- Two baby bald eagles have hatched in Florida, and the heartwarming moments were caught on camera for everyone to see.

The parents, Harriet and her mate, M15, have spent more than a month patiently taking turns guarding and incubating the eggs and hunting around their nest, located on the Dick Pritchett Real Estate family farm.

A confirmed pip -- a small crack that signals the first sign of a hatching -- was seen on one of the eggs in the bald eagle nest Sunday morning and the baby hatched around 12:45 p.m. Monday, according to the farm. The second baby eagle made its way into the world Tuesday around 5:45 p.m.

It generally takes between 12 to 72 hours for a chick to completely hatch, as the baby slowly uses its egg tooth to chip out of its shell without any help, according to the family.

For the past 10 years, the Pritchetts have installed three cameras around the nest to allow anyone around the world to watch the eagles and their beautiful moments, from the time the eggs are laid to the day the eaglets are born.

Harriet and M15 have become internet sensations, with thousands of people around the world watching their 24-hour livestream, run by the Southwest Florida Eagle Cam, in anticipation.

After announcing the official pip, or start of hatch, with the first egg, the Southwest Florida Eagle Cam saw an average 2,500 viewers per minute, Virginia Pritchett McSpadden, who runs the project with her family, told CNN. They had about 6,500 watching, but in the past, they have seen 10,000 to 40,000 viewers a minute as the actual hatch happens, McSpadden said.

The first egg was laid on November 20, with the second egg laid three days later. The average incubation period for bald eagles is 35 days, according to Southwest Florida Eagle Cam.

Harriet has laid 23 eggs, including the two new babies, since the cameras were installed in 2012. She has been mating with M15, named after Male 2015, since the fall of 2015 after Ozzie, whom Harriet first mated with, passed away after multiple violent altercations with M15.

"Harriet and M15 will continue to nurture their eggs until they feel movement and the chick scratches the surface of the egg to break out. Once the hatchling has begun to breathe, it will make soft calls that the adults can hear."

While fans were able to watch as the pair took care of their eggs, frequently rolling them and keeping them warm, there were also some terrifying moments for the expecting parents. Just a week before the expected "Hatch Watch," a snake found its way into the nest and an owl attacked M15.

Bald eagles, once on the endangered species list, are now thriving, according to a report published in 2020.

The US Fish and Wildlife Service said in a report that bald eagles have quadrupled in size since 2009. More than 316,700 bald eagles, and more than 71,400 nesting pairs, were present in the lower 48 states during the 2019 breeding season, according to the report.

"This is truly a historic conservation success story," US Secretary of the Interior Deb Haaland said at a news briefing.

"The bald eagle has always been considered a sacred species to American Indian people and similarly it's sacred to our nation. ... The strong return of this treasured bird reminds us of our nation's shared resilience and the importance of being responsible stewards of our lands and waters that bind us together.″

In 1963, there were only 417 breeding pairs, and in a national effort to save the iconic bird, the federal government banned the use of DDT in 1972. The bald eagle was then placed under protection of the Endangered Species Act, which allowed the government to protect their habitats.