Two Americans among 15 detained over assassination of Haitian President 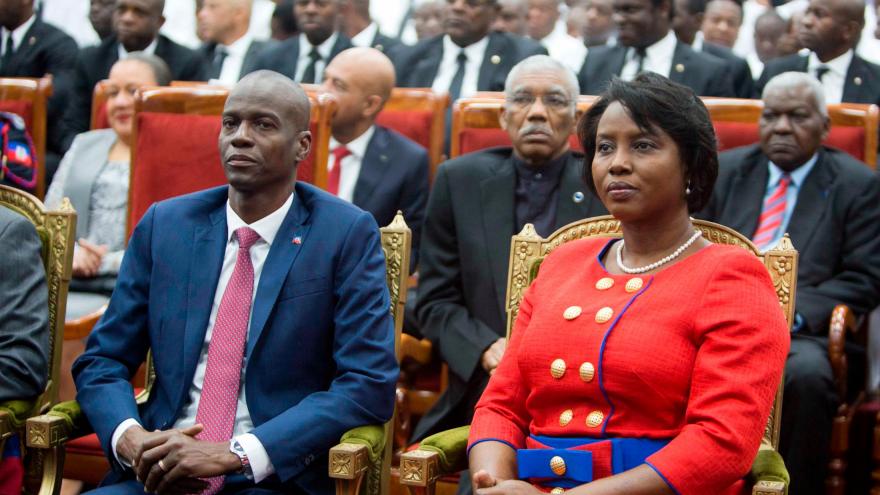 (CNN) -- Two US citizens are among more than a dozen arrested in Haiti in connection with the assassination of President Jovenel Moise, a top government official said Thursday.

In a press conference in the capital Port-au-Prince on Thursday, Haiti Chief of Police Leon Charles said 28 people were involved in the assassination, including 26 Colombians, in addition to the two Haitian-Americans.

In a video statement, Defense Minister Diego Molano said Interpol requested information from the Colombian government and the National Police about the alleged perpetrators.

"Preliminary information indicates that they are Colombian citizens, retired members of the National Army," Molano said.

Minister Molano also pledged Bogota would cooperate in the investigation.

Haiti's ambassador to the United States, Bocchit Edmond, described suspects as foreign "mercenaries" and said he believed they had received assistance from Haitian nationals, but officials have divulged few public details on the attack.

The Haitian National Police have requested investigative assistance and the US is responding to that request, State Department spokesperson Ned Price told reporters. Price said the situation is "evolving rapidly."

Moise's death takes place against a background of extreme violence in the capital Port-au-Prince which has claimed the lives of many citizens in recent weeks. Haiti was already dealing with political turmoil, a growing humanitarian crisis, and a worsening Covid-19 epidemic.

The assassination also leaves a huge power vacuum in Haiti. Its parliament is effectively defunct and two men are simultaneously claiming to be the country's rightful prime minister.

The supreme court president would normally be next in line to take over on an interim basis, but he recently died of Covid-19, judge Jean Wilner Morin, president of the national association of Haitian judges, told CNN.

Joseph declared a "state of siege" in Haiti on Wednesday, closing the country's borders and imposing martial law.

But Joseph has not been confirmed by parliament -- which has not sat since 2020 -- and he was in the process of being replaced by Ariel Henry, whom the president appointed shortly before his death. Henry told the Haitian newspaper le Nouvelliste that "Claude Joseph is not prime minister, he is part of my government."

Moise was killed during an attack on his private residence in Petion-Ville, a suburb of Haiti's capital, early on Wednesday. The attackers stormed Moise's home at around 1 a.m. and fatally wounded the head of state.

Former Prime Minister Laurent Lamothe said Moise was shot 16 times. Speaking to CNN, Lamothe said he was calling for an international investigation into the assassination.

"The president had a lot of enemies, strong enemies locally that he was doing a lot of reforms, and he had a lot of pushback on those reforms," Lamothe said.

Haiti's first lady, Martine Moise, was shot in the attack and was evacuated to a hospital in Miami for treatment, according to Edmond, who said her condition is stable but critical. Images showed her on a stretcher arriving at Jackson Health System's Ryder Trauma Center in Miami.

Ambassador Edmond said that while he didn't have the latest information on Martine Moise's condition, he believed "she's now out of danger."

Edmond said he believed the suspects, whom he referred to as "well-trained killers," received assistance from Haitian nationals due to vehicles they used to get to the presidential residence where the President was killed. Edmond said Haitian National Police were in the process of determining their nationalities.

"We are trying to move forward and see how we can identify more of those who participated in this horrible act," he said.

Video from the scene showed suspects speaking Spanish and they presented themselves as Drug and Enforcement Administration (DEA) Agents, Edmond said. "I believe they are fake DEA agents," he told reporters. CNN has viewed the video and cannot independently confirm the authenticity of the audio or video.

"We don't know how they came in," Edmond said, adding that they did not know if the attackers were still in the country. He said if they have left, it would be via a land border with the Dominican Republic because Haiti would have detected a plane leaving and the airport has been closed since the attack. He said the airport would reopen "once we have this situation under control."

The Dominican Republic's flight authority has suspended air operations to and from the Republic of Haiti, the country's civil aviation board said in a statement.

Addressing the nation after the assassination, Joseph, the acting prime minister, declared the state of siege and pleaded with citizens to remain calm.

The state of siege is the middle of three levels of emergency under Haitian law, alongside the lower "state of emergency" and the highest level referred to as the "state of war."

Under the state of siege regime, national borders are closed and martial law temporarily is imposed, with Haiti's military and national police empowered to enforce the law.

Moise, 53, was a former banana exporter and divisive figure in Haitian politics. He spent most of the past year waging a political war with the opposition over the terms of his presidency.

For now, it isn't immediately clear who will replace him. Judge Jean Wilner Morin, President of the National Association of Haitian Judges, told CNN the line of presidential succession in the country is now murky.

Throughout his presidency, Moise had repeatedly failed to hold elections at local and national levels, leaving much of the country's governing infrastructure empty. A constitutional referendum is set to be held in September, alongside the presidential and legislative elections. Municipal and local elections have been scheduled for January 16, 2022, the official electoral calendar also showed.

Many in the country had disputed Moise's right to continue serving in the presidency this year.

Moise's private residence is in Petion-Ville, in Haiti's capital Port-au-Prince.

While the US, United Nations and Organization of American States supported his claim to a fifth year in office, critics say he should have stepped down on February 7, citing a constitutional provision that starts the clock once a president is elected, rather than when he takes office.

Moise, however, claimed his five-year term should end in 2022 because he wasn't sworn in until February 2017. His inauguration was delayed over allegations of voter fraud during the 2015 election, which led to a presidential runoff that was postponed twice over what authorities called threats and "security concerns."

Haiti's capital has been reeling from violence for weeks, with rival groups battling one another or the police for control of the streets, displacing tens of thousands of people and worsening the country's humanitarian crisis.

Ex-police officer Jimmy Cherizier last week vowed before local media to carry out a "revolution" in the city.

Meanwhile, the coronavirus pandemic has been worsening in Haiti. UNICEF, the United Nations' children's agency, said Thursday that Haiti was the only country in the Western Hemisphere to not have received a single dose of Covid-19 vaccine.

Last month, the Pan American Health Organization warned that the response in the country must be scaled up dramatically to cope with sharply escalating cases, hospitalizations and deaths. Haiti has reported more than 19,000 Covid-19 cases and 467 deaths, according to the Johns Hopkins University tally.

At the same time, the country is facing a dire economic situation. Its economy had been contracting even before the pandemic and shrunk further 3.8% in 2020, with about 60% of the population now living in poverty, according to the World Bank.

According to UNICEF, more than 1.5 million children are currently in urgent need of humanitarian assistance in Haiti. The agency said acute childhood malnutrition among children under five has increased by 61% last year and admissions of severely malnourished children in health facilities across Haiti jumped by 26% in the first three months of this year, it added.

"The new wave of violent incidents that may arise after the killing of the President of Haiti could further exacerbate the humanitarian needs and hinder humanitarian access to the most vulnerable groups, leaving thousands of affected people with little to no assistance," UNICEF warned.