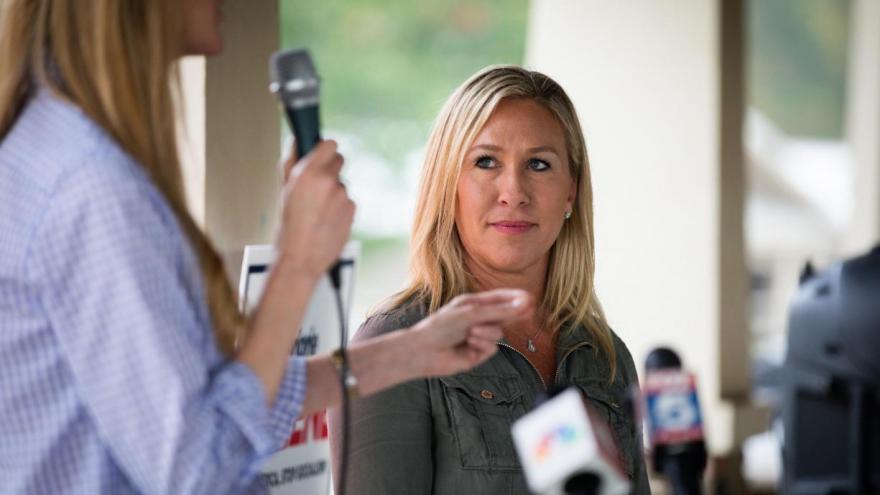 "The account referenced has been temporarily locked out for multiple violations of our civic integrity policy," the spokesperson said. As a result, the congresswoman will be locked out of her account for 12 hours.

Greene, who has a track record of incendiary rhetoric and ties to the baseless QAnon conspiracy theory, had tweeted a conspiracy-laden thread earlier Sunday about the Georgia Senate elections. Some of the tweets earned labels from Twitter noting: "This claim about election fraud is disputed, and this Tweet can't be replied to, Retweeted, or liked due to a risk of violence."

The Georgia Republican bemoaned her suspension in a statement Sunday calling on Congress to "act swiftly" to "protect free speech in America."

"Conservative Americans shouldn't be afraid to speak their mind. They shouldn't have to fear being cancelled by American corporations where they work, do business, and use services," she said. "They shouldn't be scared into submission by Socialists who want to end their way of life."

Greene's suspension comes as the social media platform continues to crack down on misinformation in the wake of the US Capitol breach that left five dead, including a US Capitol Police officer. Earlier this month, Twitter banned President Donald Trump from the platform indefinitely, and later, suspended more than 70,000 accounts for promoting the QAnon conspiracy theory.

Twitter CEO Jack Dorsey said last week, "I believe this was the right decision for Twitter" to ban the President but maintained that he did not "celebrate or feel pride in our having to ban @realDonaldTrump from Twitter, or how we got here."

"While there are clear and obvious exceptions, I feel a ban is a failure of ours ultimately to promote healthy conversation. And a time for us to reflect on our operations and the environment around us," he added.

Though only elected to the House in November, Greene has long peddled conspiracy theories and bigoted views online.

In the years before she ran for office, Greene wrote two conspiracy-laden blog posts speculating that the 2017 White nationalist rally in Charlottesville, Virginia, which led to one counter-protester's death, was an "inside job" and promoting a debunked conspiracy alleging some Democratic Party leaders were running a human-trafficking and pedophilia ring -- known as "Pizzagate" -- as real.