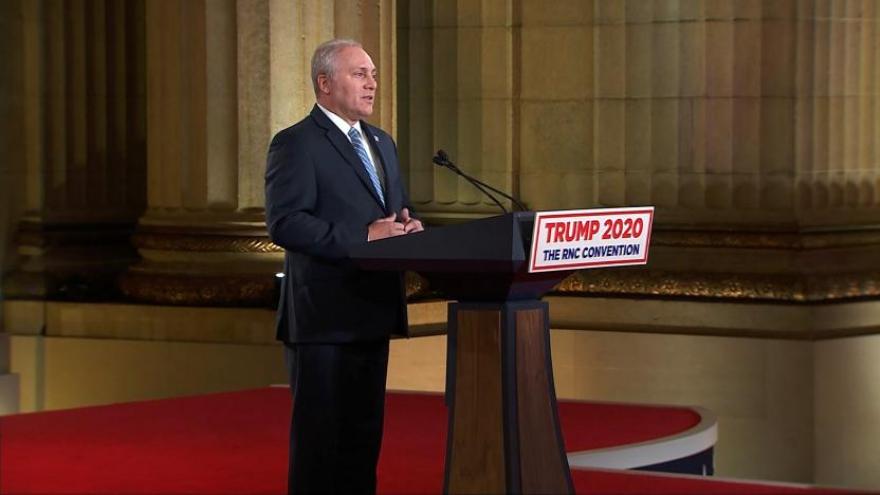 The video splices together footage from an interview between, Ady Barkan, who has ALS and speaks using a computerized artificial voice, and Biden.

In the original video, Barkan asks Biden if he can agree that "we can redirect some of the funding," for police departments toward mental health services, to which Biden replies, "Yes."

The clip tweeted out by the number two Republican in the House splices in the words "for police" from one of Barkan's other questions to make it sound as if Barkan is asking Biden if he agrees they can "redirect some of the funding for police."

Scalise used the tweet to promote the popular talking point that Democrats are responsible for sowing unrest as protests continue nationwide following shootings of Black people by police, adding in his tweet: "No police. Mob rule. Total chaos. That's the result of the Democrat agenda."

Barkan tweeted to Scalise before he took down the tweet, "These are not my words. I have lost my ability to speak, but not my agency or my thoughts. You and your team have doctored my words for your own political gain. Please remove this video immediately. You owe the entire disability community an apology."

A Twitter spokesperson said the tweet was labeled based on its, "synthetic and Manipulated Media policy." The issue with the video was the audio manipulation of Barkan, originally adding words to the audio Barkan didn't say in that context.

Before deleting the video, Scalise defended it tweeting, "Twice in one interview Biden says 'yes' & 'yes absolutely' to questions about 'redirecting' police funding."

And in another tweet Scalise said, "While Joe Biden clearly said 'yes,' twice, to the question of his support to redirect money away from police, we will honor the request of @AdyBarkan and remove the portion of his interview from our video."

Biden also tweeted Sunday demanding that the video be taken down.

"This video is doctored -- and a flagrant attempt to spread misinformation at the expense of a man who uses assistive technology," Biden said. "It should be removed. Now."

House Speaker Nancy Pelosi earlier slammed Scalise's tweet saying in her own, "Congressman Scalise must take his doctored video down and apologize immediately."

CORRECTION: This story has been corrected to accurately describe how the video was manipulated.