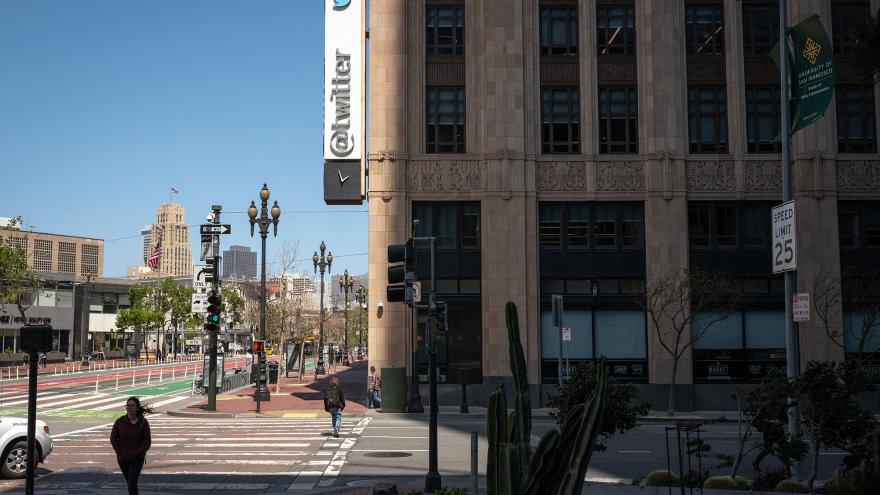 (CNN) -- Twitter on Wednesday held what could be its last annual shareholder meeting as a public company for a long time after Elon Musk agreed to take it private in a $44 billion deal.

But the meeting took place against the backdrop of ongoing drama over Musk's attempts to pause the deal, and his publicly pushing back at the company's executives on issues including the prevalence of spam accounts and content moderation decisions. Twitter now operates under a cloud of uncertainty about the fate of the transaction, and how Musk could upend the business, whether the acquisition goes through or not.

Twitter CEO Parag Agrawal joined Wednesday's meeting alongside a handful of other executives to answer shareholder questions. He started by saying they wouldn't address the acquisition, but he suggested the deal is moving forward.

"We are working through the transaction process," Agrawal said. "For regulatory and other reasons, we cannot discuss the transaction today. Even as we work toward closing this transaction, our teams and I remain focused on the important work we do every day to serve the public conversation."

Musk last month reached a deal to acquire the social media company for $54.20 per share. The Tesla and SpaceX CEO has said he wants to bolster "free speech" on the platform — by which he has said he means allowing all speech that complies with local laws — by removing some content restrictions and rolling back permanent bans. He has also said he wants to rid the platform of spam and scam bot accounts.

But barely two weeks after agreeing to the acquisition, Musk tweeted that his deal to buy Twitter was temporarily "on hold" pending details on the number of spam bots on the platform. He followed that up days later by saying the deal "cannot move forward" until he sees more information about the amount of spam accounts.

Industry watchers have speculated that Musk might try to negotiate a lower price for the acquisition or attempt to walk away from the deal altogether, amid a broader downturn in the market and a decline in the valuation of many top tech and social media companies. Tesla stock, which Musk needs to help finance his purchase of Twitter, has also declined sharply since the deal was announced.

Although Twitter's share price never reached the initial deal price, its stock has plunged in recent days to around $36.50, below where shares were trading before Musk first disclosed his large stake in the company. The decline suggests that investors are skeptical about the deal getting done at the original price.

Twitter's board, however, said earlier this month it plans to "enforce the merger agreement" at the originally agreed upon price. Legal experts have previously said this could mean taking legal action against Musk if he tries to pull out of the deal.

In another sign of change for the company, the meeting also marked cofounder Jack Dorsey's last day in an official leadership role at Twitter. He stepped down as CEO last fall and said he would stay on the company's board through Wednesday's meeting.

Wednesday's event was the company's regular annual shareholder meeting. The company is expected to hold a separate meeting later this year for shareholders to vote to approve Musk's takeover deal.

Two shareholder proposals were approved during the meeting. One requires the company to compile a report on the risks of the use of concealment clauses, such as nondisclosure agreements. The other requires the company to disclose its spending on elections. But it's unclear how much staying power those moves will have if Musk's takeover deal succeeds and Twitter becomes a private company in a matter of months.

Another shareholder proposal, which was not approved, called for an audit of the company's diversity, equity and inclusion practices and their impacts on civil rights and non-discrimination, and was introduced by a representative who called DEI practices a "mind virus," echoing a phrase used by Musk in an apparent reference to progressive politics.

"Mr. Musk, if you're listening, we hope that you'll join us in this proposal," the representative of the proposal said. "You once called wokeness a 'mind virus.' We agree."