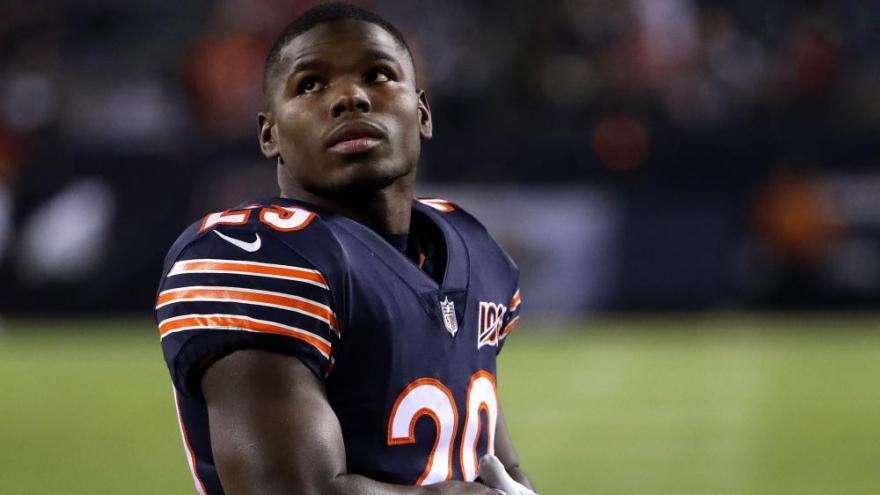 Authorities confirmed that a person found dead at a North Carolina Duke Power substation over the weekend was Tyrell Cohen, brother of Chicago Bears running back Tarik Cohen. Tarik is shown here before playing against the Kansas City Chiefs at Soldier Field on December 22, 2019 in Chicago, Illinois.

(CNN) -- Authorities confirmed that a person found dead at a North Carolina Duke Power substation over the weekend was Tyrell Cohen, brother of Chicago Bears running back Tarik Cohen.

"Raleigh Police Department detectives, working in conjunction with the Wake County Sheriff's Office, have confirmed the identity of the deceased individual that was discovered at the Duke Power substation near Lead Mine and Six Forks Roads," Raleigh Police said in a statement Sunday. "Tyrell Antar Cohen, 25, was reported missing on Saturday night, after he failed to return home. No foul play is suspected in his death."

After Tyrell Cohen did not return home Saturday night, a family member filed a missing person's report with the Raleigh Police Department, which commenced a search, the Wake County Sheriff's Office (WCSO) said in a statement Sunday.

The WCSO said it responded Sunday to the Duke Power substation after an employee discovered a man's body inside the substation's perimeter.

"It's believed the man died of electrocution while attempting to climb some of the equipment," WCSO said in a statement issued Sunday.

Tarik Cohen confirmed his brother's death in a series of tweets Monday.

"I lost my brother, my twin, myself. What a great man he was. I'm glad i got to express just how much i love him while he was here. God truly calls home the best and most worthy. I'll just miss him forever. I got Riah and Trini Tyrell i swear to god," the tweet read.

Cohen also requested privacy for his family so that they may grieve, he tweeted.

The Chicago Bears expressed their condolences to Tarik and his mother, Tilwanda, as well as the rest of the family and loved ones.

"On behalf of the entire Bears family, we extend our most heartfelt sympathies to all who mourn his loss," the team tweeted Sunday.