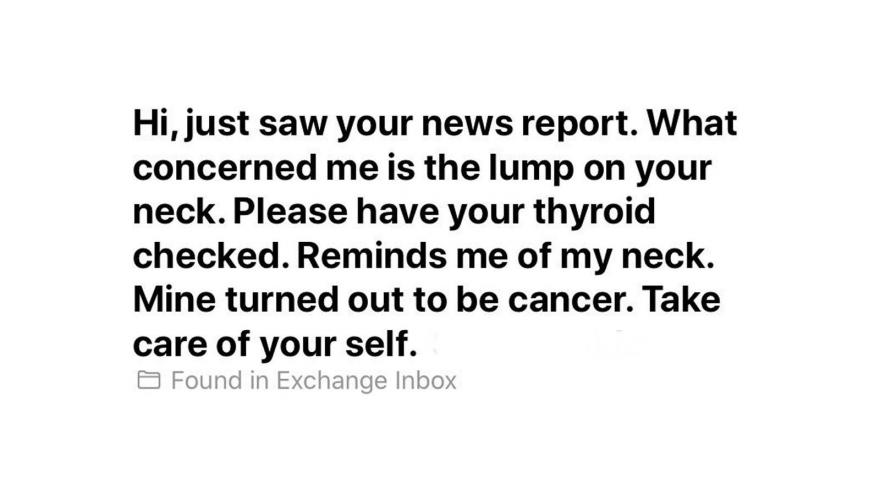 The email Price received from the concerned viewer.

(CNN) -- A Florida television reporter was diagnosed with cancer after a concerned viewer saw a lump on her neck and alerted her that it could be a tumor.

Victoria Price wrote in a Twitter post Thursday that she will be undergoing surgery Monday to remove the tumor, her thyroid, and a few lymph nodes. Price is an investigative reporter for WFLA in Tampa.

The unexpected series of events began in June when a woman saw Price on air and noticed a suspicious lump on her neck. The woman immediately emailed her.

"Hi, just saw your news report. What concerned me is the lump on your neck. Please have your thyroid checked. Reminds me of my neck. Mine turned out to be cancer. Take care of your self," the woman wrote, placing the entire text in the email's subject line.

In a story for WFLA's website, Price said she didn't know whether to panic or disregard the email.

"My lovingly-pushy boyfriend, who is well aware of my predisposition to shrugging things off and pretending I'm invincible, forced a phone into my hand and I called my primary care physician to schedule an appointment," she wrote.

Her doctor agreed that was something was wrong and an ultrasound found a nodule growing on her thyroid. Price then saw cancer specialists at Tampa General Hospital and the viewer's suspicions were confirmed: Price's lump was thyroid cancer and it was spreading to her lymph nodes.

"Had I never received that email, I never would have called my doctor. The cancer would have continued to spread. It's a scary and humbling thought," Price wrote. "I will forever be thankful to the woman who went out of her way to email me, a total stranger. She had zero obligation to, but she did anyway."

After revealing the news, Price said she would be taking off a week from work to undergo surgery. She plans to have a CT scan and biopsy for other lymph nodes to ensure the cancer has not spread.

"As a journalist, it's been full throttle since the pandemic began," she said. "Never ending shifts in a never-ending news cycle. Adjusting to remote workflows and in my case, taking on a new investigative role. We were covering the most important health story in a century, but my own health was the farthest thing from my mind."

Price emailed the woman back to thank her for what she did, but has yet to receive a reply.

She ended her tweet by writing, "The world is a tough place these days. Don't forget to take care of yourself. Take care of each other. Love y'all and see you soon."