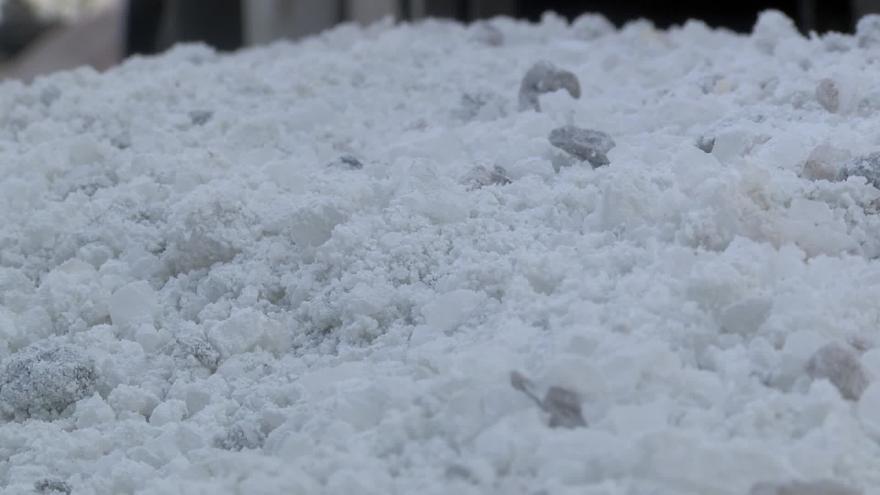 CONCORD, N.H. (AP) — Experts who fear road salt is starting to take a toll on the nation's waterways are turning to beet juice, molasses, and even beer or cheese waste to make them safer.

Tossed onto sidewalks and dumped onto highways, salt for decades has provided the cheapest and most effective way to cut down on traffic accidents and pedestrian falls during winter storms.

But researchers cite mounting evidence that those tons of sodium chloride crystals — more than 20 million nationwide each year — are increasing the salinity of hundreds of lakes, especially in the Northeast and Midwest. That's putting everything from fish and frogs to microscopic zooplankton at risk.

"There has been a sense of alarm on the impacts of road salt on organisms and ecosystems," said Victoria Kelly, a road salt expert at the Cary Institute of Ecosystem Studies in New York. "We've seen increasing concentrations in river water, lakes, streams. Then, scientists started asking the question: What is going to happen to the organisms living in freshwater bodies and what will happen to the freshwater bodies as a whole?"

Believed to be first used in the 1940s in New Hampshire, salt became the go-to de-icing agent as cities expanded, highways were built and motorists came to expect clear roads. More than a million truckloads a year are deployed in ice-prone climes, most heavily in the Northeast and Midwest.

But many state and local agencies are seeking ways to reduce salt use as its environmental impacts are becoming more apparent.

They have turned to high-tech equipment to spread salt more efficiently, better weather forecasting to time their salting, and liquefied organic additives that help salt stick to pavement. That reduces salt use by preventing it from washing away immediately.

Agencies from New Jersey to North Dakota are using a mixture that includes beet juice; New Hampshire and Maine use one with molasses. Highway departments also have turned to beer waste, pickle brine and, in at least one Wisconsin county, cheese brine.

"Adding salt to the environment does have negative impacts, but for those of us in the Northeast, especially in rural states, where driving is the predominant way of getting around, we need mobility," said Jonathan Rubin, director of the Margaret Chase Smith Policy Center and lead author on a 2010 report on the cost and benefits of salting Maine roads.

"In my opinion, we are always going to be using some degree of road salt," he said. "The question is, can we use less?"

Salt corrosion already causes billions of dollars in damage each year to cars, roads and bridges — and now there are growing signs it's making freshwater ecosystems saltier. In the past 50 years, chloride concentrations in some lakes and rivers quadrupled and, in a few, increased a hundredfold.

Last year, a study in the Proceedings of the National Academy of Sciences concluded that more than 40 percent of 327 lakes examined had experienced long-term salinization, and that thousands more were at a risk. Researchers also estimated nearly 50 lakes in the study, including small ones in Minnesota, Wisconsin and Rhode Island, could surpass the Environmental Protection Agency's chloride threshold concentration by 2050, potentially harming aquatic life.

Earlier this month, the University of Maryland's Sujay Kaushal led another PNAS study that showed how road salt also results in the release of other salts like potassium and magnesium along with toxic metals like lead and copper into the nation's waterways. Dubbed the freshwater salinization syndrome, Kaushal said this has caused a spike in salinity and alkaline levels at nearly 230 sites in the East and Midwest including the Hudson, Potomac, and Mississippi rivers.

Experiments at the Rensselaer Polytechnic Institute aquatic lab in Troy, New York, have found that higher salt concentrations reduced growth rates in rainbow trout and decreased the abundance of zooplankton — tiny animals or larvae that are critical to the aquatic food chain and play a role in keeping lakes and streams clean.

Other studies have shown that salinization of lakes and streams reduces the numbers of fish and amphibians, kills off plants, and alters the diversity of these freshwater ecosystems.

"At high road salt concentrations, you can see reductions in growth, reduction in the diversity of species within a system and you can also see effects on reproduction of certain species," said William Hintz, of Rensselaer Polytechnic.

Despite such environmental concerns, Caleb Dobbins, New Hampshire's highway maintenance engineer, doesn't envision salt being replaced anytime soon by substitutes, such as magnesium acetate, which he says are 30 times more expensive and have their own environmental challenges.

"Everybody is looking throughout the world," he said. "Nobody is finding that silver bullet."