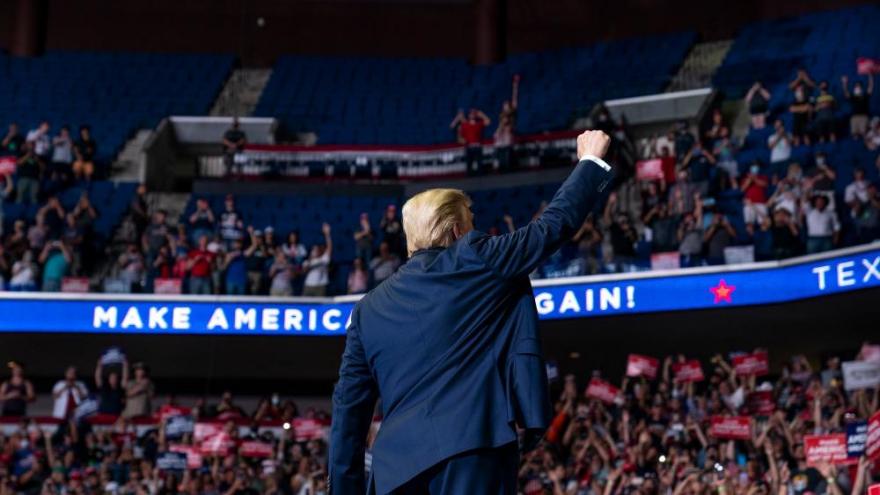 The department monitored the crowd at the Bank of Oklahoma Center, an arena that can hold just more than 19,000, and public information officer Andy Little told CNN that Saturday's general admission count does not include suite holders, staff and media.

Trump campaign communications director Tim Murtaugh disputed the department's count Sunday, saying, "12,000 people went through the metal detectors so that number is way off." He added that the lower bowl of the BOK Center, which admitted rallygoers on a first-come, first-serve basis, was mostly full.

Trump and his allies had ginned up expectations for a massive crowd in the days leading up to the rally, with campaign officials telling CNN that more than 1 million people had registered to attend and one local official stating they expected 100,000 to show up near the arena. Those crowds didn't appear Saturday, leading the campaign to abruptly abandon plans for the President to speak to an "overflow" area outside the arena.

The Trump campaign has tried to blame "radical" protesters, even saying some were allegedly blocking metal detectors, for frightening some of the President's supporters from attending Trump's return to the campaign trail in Tulsa on Saturday.

Several CNN teams on the ground throughout Tulsa on Saturday said they did not see any prolonged activity by protesters that prevented attendees from gaining access, although one entrance was closed for brief periods of time because of efforts to block that entry point.

Late Saturday night, a Secret Service spokesman told CNN in a statement that an entrance to the Tulsa rally was temporarily closed and later reopened allowing people to enter. The statement is consistent with what CNN observed outside the rally.

"Earlier today, several individuals attempted to block an entrance to the site in Tulsa," the statement said. "For the safety of attendees, the public and event staff, the local police temporarily closed the gates at that entrance point. As soon as local law enforcement was able to provide a clear path, the entrance point was reopened and attendees were permitted to enter. For information on any arrests, contact the City of Tulsa Police Department."

When pressed why the number of attendees was much less than predicted, Murtaugh on Saturday night blamed "radical protestors" and said media coverage of demonstrations had attempted "to frighten off the President's supporters."

"President Trump is rallying in Tulsa with thousands of energetic supporters, a stark contrast to the sleepy campaign being run by Joe Biden from his basement in Delaware. Sadly, protestors interfered with supporters, even blocking access to the metal detectors, which prevented people from entering the rally," he said. "Radical protestors, coupled with a relentless onslaught from the media, attempted to frighten off the President's supporters. We are proud of the thousands who stuck it out."

Biden campaign spokesman Andrew Bates said Sunday that Trump "has abdicated leadership and it is no surprise that his supporters have responded by abandoning him.

"Donald Trump's presidency was already in a tailspin because of his gross mismanagement of the coronavirus pandemic and his disgusting fomenting of hate and division in the wake of George Floyd's tragic murder. Then it was exposed that he undermined American national security and begged the Chinese government to help him win a second term," he said.

CNN has reached out to the Tulsa Police Department for comment on the security situation Saturday.

From Saturday afternoon into the evening, CNN correspondents and producers reported there were protesters in the downtown area, though a large security perimeter prevented them from getting within blocks of the BOK Center.

Correspondent Martin Savidge and a CNN producer reported that one security checkpoint at 4th Street and Boulder Avenue in downtown Tulsa was closed for about 15 to 30 minutes Saturday afternoon. Some of the closure was shown live on CNN, amid a standoff between police and protesters.

A crowd of dozens of anti-Trump protesters were demonstrating at the location, and an equally large gathering of Trump supporters watched and sometimes verbally engaged them. The police, with helmets, shields and batons, ordered the crowd away from the entry, telling them that the gates would not reopen until they did. The crowd eventually retreated and access to the screening area resumed.

The incident appeared to be a temporary disruption that did not significantly prevent a large crowd from attending the rally, as people were able to pass through security the remainder of the afternoon and evening.

CNN digital producers Jeremy Moorhead and Gabe Ramirez reported from two of the rally's three public entrances, and did not witness any protesters trying to block access to the rally. The scenes there were peaceful, they reported, until some confrontations occurred later in the evening as supporters left the area around the arena.

CNN correspondent Abby Phillip reported that when she went through security to the overflow area there were very few people entering there and that it was not possible for protesters to access the metal detectors.

And CNN correspondent Gary Tuchman, who reported from various locations downtown and spoke with multiple Trump supporters, said nobody mentioned the problems referenced in the campaign statement.

This story has been updated with comment from the Biden campaign.