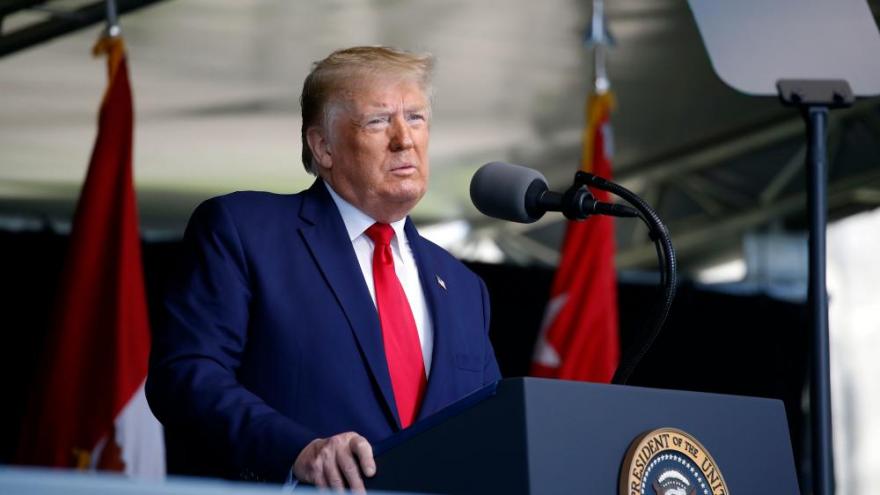 (CNN) -- The director of the Tulsa Health Department said he wishes President Donald Trump would postpone his planned campaign rally set to take place there on Saturday, citing concerns about a recent increase in local cases of Covid-19.

In an interview with the local newspaper, Tulsa World, Bruce Dart said, "I wish we could postpone this to a time when the virus isn't as large a concern as it is today."

The city's health department on Friday said it recorded its highest daily increase of coronavirus cases to date.

CNN reached out to the Trump campaign about Dart's concerns and was told the campaign has no comment.

Overnight, Tulsa World editorialized that "this is the wrong time" and "this is the wrong place" for the President to hold a rally, citing the challenges created by the corornavirus pandemic along with racial unrest following the death of George Floyd.

"When the president of the United States visits your city, it should be exciting. We think a Trump visit will be, but for a lot of the wrong reasons, and we can't welcome it," the newspaper wrote.

The Tulsa Health Department said in a statement obtained Sunday by CNN that it is "concerned about the safety of any large gathering of people in enclosed spaces where social distancing is difficult to maintain."

The department last week encouraged caution regarding large gatherings after an investigation in Tulsa "identified an outbreak linked to indoor gatherings, which large groups of people congregated in close contact for prolonged periods of time."

Trump has already moved the date of his rally in Tulsa once, from Friday to Saturday, because the original date coincided with Juneteenth -- the day commemorating the end of slavery in the US.

"We had previously scheduled our #MAGA Rally in Tulsa, Oklahoma, for June 19th -- a big deal," Trump tweeted Friday night. "Unfortunately, however, this would fall on the Juneteenth Holiday. Many of my African American friends and supporters have reached out to suggest that we consider changing the date out of respect for this Holiday, and in observance of this important occasion and all that it represents. I have therefore decided to move our rally to Saturday, June 20th, in order to honor their requests."

Aside from the significance of June 19, Tulsa also has a troubled racial history. In 1921, it was the site of a massacre of hundreds of African Americans during racial unrest in the historic section of the city known as "Black Wall Street."

Republican Sen. James Lankford of Oklahoma told CNN's Jake Tapper on "State of the Union" on Sunday that he was planning to attend Trump's rally, but that he had not yet decided if he would wear a mask while there.

Attendees of Trump's upcoming rally must agree not to sue the campaign if they contract coronavirus. Rallygoers are asked to RSVP to gain admission to the event and by registering, they must agree to a disclaimer that states they acknowledge the "inherent risk of exposure to COVID-19 exists in any public place where people are present."

"By attending the Rally, you and any guests voluntarily assume all risks related to exposure to COVID-19 and agree not to hold Donald J. Trump for President, Inc.; BOK Center; ASM Global; or any of their affiliates, directors, officers, employees, agents, contractors, or volunteers liable for any illness or injury," the disclaimer reads.

Trump's campaign officially announced plans on Wednesday for the President's first campaign rally since most of the country shut down to prevent the spread of the virus.

The President has been anxious to get back out on the trail since in-person campaigning stopped. His campaign had originally drawn up plans to restart rallies in July, but it pushed up the timeline as more states started reopening their economies and as big crowds have taken part in demonstrations across the country in the wake of George Floyd's death late last month in the custody of Minneapolis police.