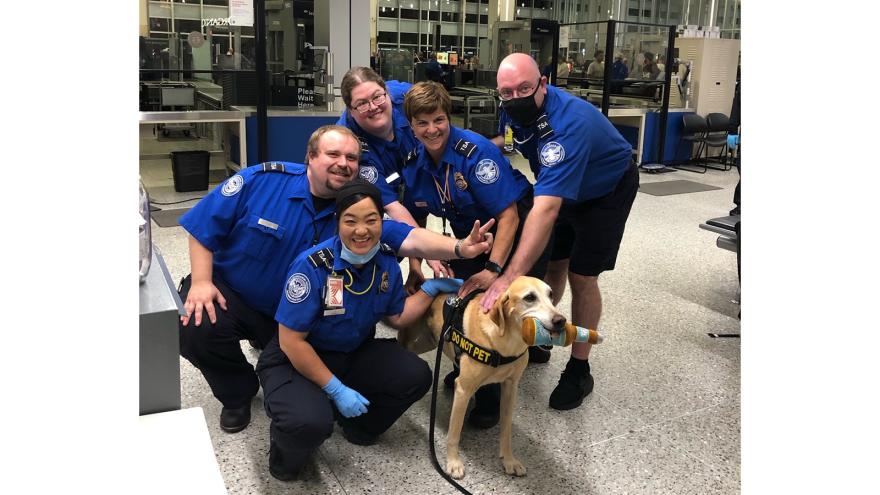 Eebbers, the adorable 11-year-old Vizsla-Labrador mix, has been working in passenger screening at the Minneapolis-St. Paul International Airport's for almost 10 years, said the TSA in a statement shared with CNN.

Eebbers and his handler, Jean Carney, started their simultaneous retirement on August 31.

"Let's give a warm round of ap-paws to both Eebbers and his handler, Jean Carney, as they celebrate their retirement!" wrote the airport on Twitter.

The agency explained that although Eebbers was still a successful sniffer dog, "the job is very physically and mentally taxing on our working canines."

"Their handlers are sensitive to their abilities and enthusiasm, and we like for them to retire when they still have a chance to have several years ahead of them to play, be healthy, and just be a dog."

Eebbers was the agency's oldest working dog, the TSA added.

Like other passenger screening dogs, Eebbers is trained to detect the scent of explosives or explosive materials, said the TSA. He was named after US Army Private James Ebbers, who died in Djibouti in 2002, said the TSA.

Eebbers was the last working dog born at the TSA's now-shuttered Puppy Program, according to the statement.

"We could not be more proud of the years of service Eebbers and Jean have devoted to keeping passengers safe, both at Minneapolis-St. Paul International Airport and around the country, at numerous events," said TSA Minnesota Federal Security Director Marty Robinson in a statement shared with CNN. "Our biggest threat is explosives coming through, and our canine teams are the best defense against that."

"The Cutest Canine title is a fitting send-off for this dog, who will now enjoy a well-deserved retirement."

Eebbers was awarded the TSA's Cutest Canine award at the end of August after a national social media competition. In addition to working in standard passenger screenings at the Minneapolis airport, his illustrious career has also included sniffing at two Super Bowls, the Special Olympics World Games, an NCAA National Championship Football game, the Indianapolis 500, and a NASCAR event, says the TSA.

The hardworking dog will continue to live with his handler for the rest of his life, said the TSA.

"TSA canine handlers live with their dogs throughout their careers, and this close bond helps both team members work more successfully," said the agency.