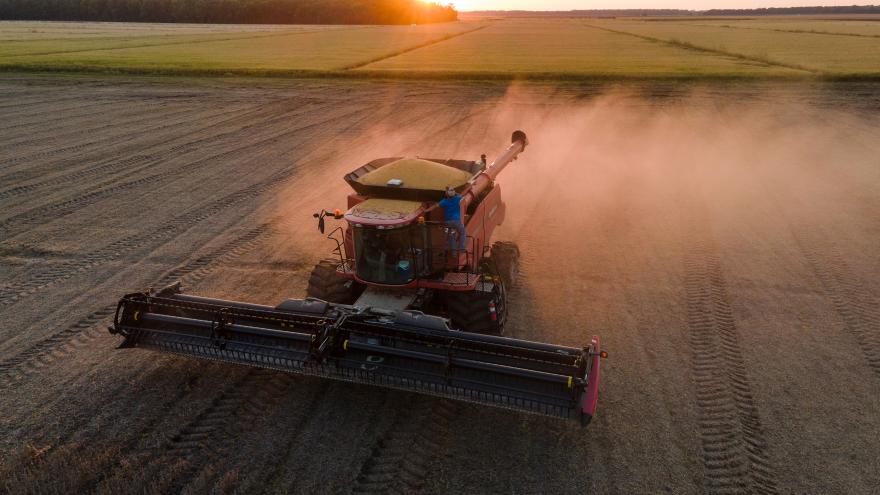 (CNN) -- It's been nearly four years since China put tariffs on American-grown soybeans during a tit-for-tat trade war with then-President Donald Trump -- and theyremain in place despite the change in administrations.

President Joe Biden has chosen to leave US tariffs imposed by his predecessor in 2018 in place on $350 billion in Chinese goods. In turn, Beijing has left its retaliatory tariffs on some agricultural products, including soybeans, and some American-made goods.

The Chinese tariffs hurt US farmers by making American-grown soybeans more expensive for Chinese buyers, who bought a majority of US exports prior to the trade war.

"We've lived with tariffs for so long, it's just the way we do business now," said Iowa farmer Dave Walton, who saw prices for his soybeans plummet after the tariffs were put in place in 2018.

His farm is near the Mississippi River, where his soybeans are usually loaded onto a barge and then sent overseas after reaching the Gulf of Mexico. This locationmade it easy to export his crop.

But this year, Walton is trying to rely less on foreign buyers. Instead of exporting his soybeans, he is selling them to a domestic company that will use the crop for seed.

Walton remains frustrated with the Biden administration for leaving US tariffs in place. If trade tensions eased, Beijing may lift the tariffs on US soybeans too.He's also frustrated that the administration has so far failed to successfully appoint people to two key agricultural trade positions: The chief agricultural negotiator role at the Office of the US Trade Representative and the undersecretary for foreign trade position at the US Department of Agriculture remain open.

"It signals to me that trade is not a priority for the administration. If it was a priority for them, they'd have those trade positions filled and they'd be working on updating trade agreements with China and other countries," he said.

Earlier this month, the Biden administration took a first step toward conducting a statutory four-year review of the US tariffs on Chinese goods -- but officials have given no indication that the review will result in removing the tariffs.

So far, the Biden administration has resisted the pressure from the American business community to lift the tariffs, which has ramped up as inflation increases.In an interview last Mondayat the Milken Institute Global Conference, US Trade Representative Katherine Tai said all tools are on the table to address inflation but stopped short of saying whether lifting tariffs should be one of them.

In 2020, a truce was reached between Trump and Chinese President Xi Jinping. Both sides stopped adding new tariffs as part of what's known as the Phase One deal. Beijing also agreed to increase its purchases of US goods and agricultural products.

But China fell well short of its goal, buying only 57% of the US exports it had committed to purchasing by the end of 2021. While agricultural exports to China returned to 2017 levels, they fell short of China's commitment. Soybean exports fell more than 30% short of the target.

Biden suggested earlier this year that China's failure to meet its commitments is the reason he's leaving the tariffs in place.

"It's uncertain," the President said in January when asked if it's time to begin lifting some of the tariffs.

"I'd like to be able to be in a position where I can say they're meeting the commitments, or more of their commitments, and be able to lift some of it. But we're not there yet," he added.

Impact on US soybeans

US exports of soybeans declined sharply immediately after China put the tariffsin place in 2018. Soybeans lost more than 75% of their export value to China between 2018 and 2019, according to a report from the USDA.

But soybean sales to China have nearly rebounded to their pre-trade-war levels. Soybean exports to China were just 1% lower in the year after the Phase One deal had been signed than they were in 2017, the USDA report found.

Still, it's hard to know what would have happened without the tariffs in place.

"The overall impact the tariffs have had on trade is a much harder thing to sort through ever since the ceasefire," said Joseph Glauber, a senior research fellow at the International Food Policy Research Institute and former chief economist at the USDA.

Still, he thinks it's a "no-brainer" for the US to lift the tariffs. "It would help normalize trade," Glauber added.

Some farmers fear they may have permanently lost some of their Chinese buyers who turned to other countries for soybeans over the last four years.

As US exports to China increased after the Phase One agreement was reached, exports from other countries grew at even faster. As a result, the US market share of China's agricultural imports is now smaller than it was before the trade war: 17% in approximately the first year of Phase One compared with 20% in calendar year 2017, according to the USDA.

There are non-tariff barriers to trade imposed by China as well. Commercial Chinese buyers need government approval to import US soybeans.

"Importers in China have to jump through hoops to get access to US soybeans. There's clearly a cost to doing business," Glauber said.

But trade issues have taken a back seat to other more pressing worries for farmers, according to the Purdue University/CME Group Ag Economy Barometer. In April,42% of producers said higher input costs are their top concern.

While Walton remains frustrated with the Biden administration's lack of action on trade, he also said he is worried about rising costs, especially for herbicide.

"I've seen some instances where the price of herbicide has doubled or tripled. ... We didn't get our first choice, but we finally got an herbicide we can use to protect our crop," Walton said.