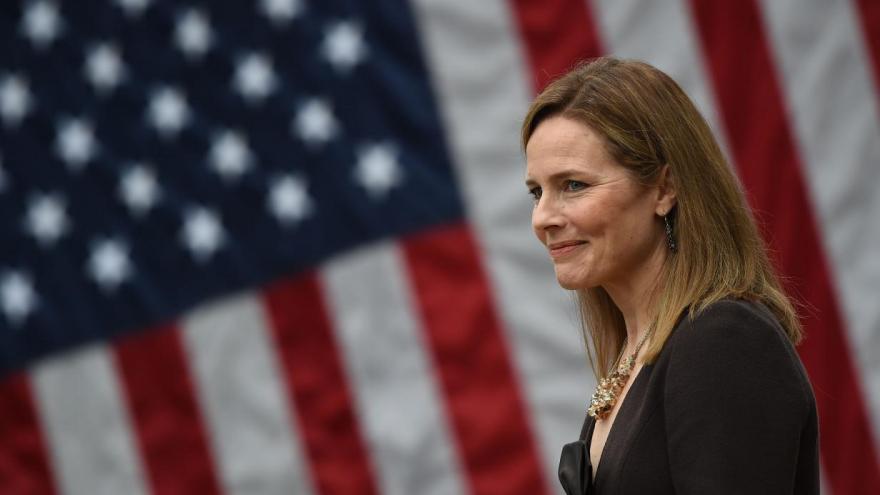 Judge Amy Coney Barrett is nominated to the US Supreme Court by President Donald Trump in the Rose Garden of the White House in Washington, DC on September 26, 2020.

(CNN) -- President Donald Trump's nominee for the Supreme Court, Judge Amy Coney Barrett, garnered high praise from Republican senators during a visit to Capitol Hill on Tuesday as the party finalizes plans for a quick confirmation process ahead of the November presidential election.

Barrett met with Senate Majority Leader Mitch McConnell before a slate of meetings with Senate Judiciary Committee Chairman Lindsey Graham and a number of GOP lawmakers on the panel, including Chuck Grassley of Iowa, Mike Crapo of Idaho, Cory Gardner of Colorado, Rick Scott of Florida, Ted Cruz of Texas, John Thune of South Dakota and Mike Lee of Utah.

McConnell -- who was joined by White House chief of staff Mark Meadows, White House counsel Pat Cipollone and Vice President Mike Pence in his meeting with Barrett -- told reporters he was glad to have Trump's nominee at the Capitol "to get the process started" and said he left his meeting with her "even more convinced" that she's the right choice for the high court.

"I left our discussion even more convinced that President Trump has nominated exactly the kind of outstanding person whom the American people deserve to have on their highest court," the Kentucky Republican said, adding that "this nominee could not be more fully qualified to serve on the Supreme Court."

That message was echoed by Grassley before he even met with Barrett on Tuesday, telling reporters that she has "a good chance of getting my vote for the United States Senate."

"I usually don't say that until everything's over, but Judge Barrett has quite a record to go on," he said.

The Capitol Hill visit takes place just days after Trump nominated Barrett to succeed the late Justice Ruth Bader Ginsburg and underscores the speed with which GOP lawmakers have rallied behind her as they push to cement a 6-3 conservative tilt on the high court. Barrett was appointed by Trump to the 7th US Circuit Court of Appeals in 2017 and advocates on the right have backed her nomination because of her writings on faith and the law.

Democrats, however, have launched a forceful case against Barrett in recent days, labeling support for her confirmation as equivalent to a vote to end the Affordable Care Act. Senate Minority Leader Chuck Schumer said at a news conference Sunday that Barrett's nomination process has been "illegitimate," adding that he would not meet with her because she has "already stated that she is for overturning the ACA."

In preparation for the confirmation battle, both Republicans and Democrats on the Senate Judiciary Committee have expanded their teams by nearly 20 people over the last week.

Over the next several days, aides will be reviewing Barrett's legal opinions and awaiting the arrival of her questionnaire.

While it's customary to bring in outside help, the expansion is also an important reminder of how much work it takes for a nomination to unfold just weeks ahead of a presidential election. Graham said Sunday that the Judiciary Committee will approve Barrett's nomination to the Supreme Court on October 22, setting up a full Senate vote to by the end of the month.

"So, we'll start on October 12, and more than half of the Supreme Court justices who have had hearings were done within 16 days or less," Graham said on Fox News.

"We'll have a day of introduction. We'll have two days of questioning, Tuesday and Wednesday, and on the 15th we'll begin to markup, we'll hold it over for a week, and we'll report her nomination out of the committee on October 22," he continued.

"Then it will be up to McConnell as to what to do with the nomination once it comes out of committee."

At the Capitol Tuesday, Schumer acknowledged the limited options Democrats have to delay the confirmation vote.

"We will use all the tools we have in the tool box," Schumer told CNN when asked if he thinks he can delay the vote beyond the last week of the month.

"After McConnell's defiling the Senate, there are fewer tools and they're not as sharp. But we will use every tool we can."