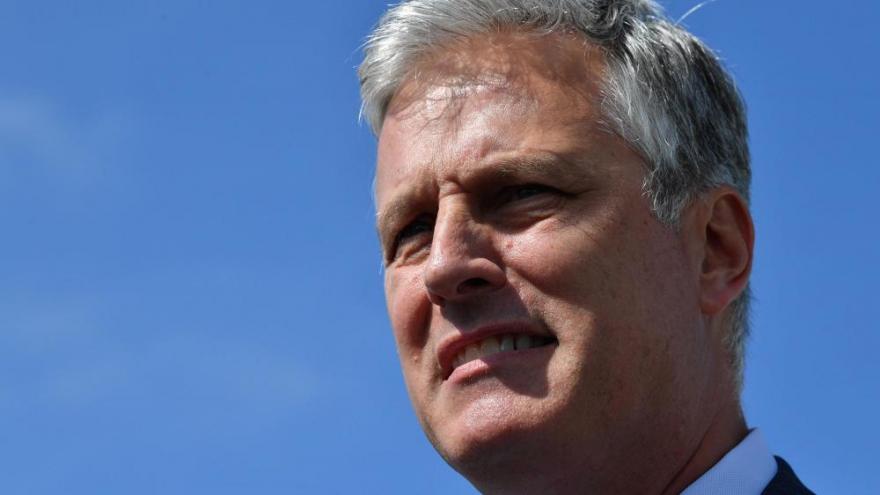 (CNN) -- President Donald Trump's national security adviser, Robert O'Brien, has tested positive for Covid-19, according to an official familiar with what happened.

O'Brien's diagnosis marks the highest-ranking Trump administration official known to have tested positive. It's unclear when O'Brien last met with Trump. Their last public appearance together was over two weeks ago during a visit to US Southern Command in Miami on July 10.

O'Brien is experiencing "mild symptoms" and is "self-isolating and working from a secure location off site," according to an unnamed statement to the press from the White House. That statement confirmed O'Brien's test results to reporters before his staff was formally informed. Several National Security Council staffers told CNN that they weren't informed that O'Brien tested positive and learned of the news from media reports.

O'Brien, one of Trump's top aides, recently returned from Europe, where he and his top deputy met with officials from the UK, France, Germany and Italy. O'Brien took a family vacation, during which he was likely exposed to the virus, immediately following his trip to Europe, a senior administration official tells CNN.

A senior administration official told CNN that O'Brien has been working from home since last week. A source familiar said O'Brien was last in the office last Thursday, when he abruptly left the White House. The White House statement said there is "no risk of exposure to the President or the Vice President."

White House chief economic adviser Larry Kudlow told reporters that one of O'Brien's daughters also contracted Covid-19 and that's how he believes he got it.

The National Security Council chief was accompanied on the trip to Europe by Secret Service agents, staffers and multiple reporters. Multiple pictures released from the trip showed O'Brien neither practicing social distancing nor wearing a mask.

Just days later, Macron and Bonne traveled to Brussels for negotiations at a European Council Summit.

On Thursday, O'Brien, who by then had returned to Washington, abruptly canceled a meeting with another European official, saying, simply, it was "for personal reasons."

As the pandemic has spread, the President has defended not wearing a mask or social distancing, with many of his top officials and White House staffers following suit, saying that it's not necessary because they are tested every day. O'Brien's positive test underscores the unique challenges of keeping the virus away from the West Wing and the President's immediate orbit.

Asked about the risk O'Brien's diagnosis poses to the President, Dr. Anthony Fauci told CNN's Wolf Blitzer on "The Situation Room" Monday evening that it depends on when O'Brien was infected and the level of his exposure to Trump.

"You have to have contact in a situation where you're there long enough and close enough to have an increased risk," Fauci, the nation's top infectious disease expert, said. "I don't know the contacts he had, the proper authorities are doing the contact tracing right now."

O'Brien, Trump's fourth national security adviser, has been largely out of sight during the coronavirus pandemic. CNN has previously reported that rather than helping to lead the administration's response, he has delegated responsibilities to top aides and even bypassed coronavirus task force meetings.

Trump tapped O'Brien, a former lawyer and hostage negotiator, to the post in September 2019, one week after he fired John Bolton amid disagreements on foreign policy issues.