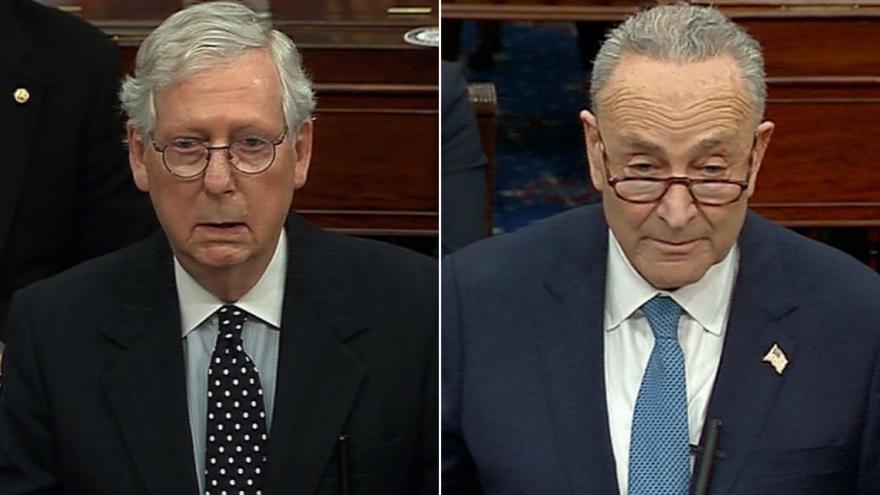 (CNN) -- There are just days to go until President-elect Joe Biden is sworn in, Donald Trump is no longer President and Democrats take control of the US Senate, but rank-and-file members on Capitol Hill are still waiting for signals from leadership about what the first month of Biden's presidency will look like.

It seems the uncertainty of the Trump era isn't going to evaporate on Wednesday because Congress isn't quite finished with Trump yet.

The status of impeachment

The focus this week is on Biden becoming the 46th President of the United States, protecting Washington on Inauguration Day and preparing for a peaceful transition of power after the attack on the US Capitol.

Talks between incoming Senate Majority Leader Chuck Schumer and current Majority Leader Mitch McConnell's offices are ongoing about what makes the most sense for the timing of the trial. While Biden has made it clear that he wants to split the day in half to allow his nominees to be confirmed in the morning ahead of the trial, that takes agreement from everyone. And it's not clear that all 100 senators are going to agree to it even if McConnell and Schumer could come to a consensus. Again, those talks are ongoing. Aides and members do not expect the impeachment trial to begin until next week at the earliest, but no one knows for sure until House Speaker Nancy Pelosi makes it clear when she will send over the articles.

A very important reminder: Don't take the lack of answer for when a trial will begin as a lack of orchestration behind the scenes. We are moving into another chapter in American history where the President, Senate and House are all controlled by the same party and unlike Trump -- who often caught his leadership off guard with rogue tweets or off-the-cuff statements -- Pelosi and Schumer are on the same page here. They don't need Biden to even tell them. They know what's at stake with an impeachment trial.

Once they go down that road, there is no turning back. The Senate is in session every day starting at 12 p.m. ET with members in their desks, six days a week for as long as the trial goes. Sending the articles too soon without a firm agreement between Schumer and McConnell jeopardizes Biden's first 100 days, his ability to get his nominees through, not to mention any goal Biden had to heal the country after the January 6 attack on the Capitol. If it feels like we are stagnant right now, it's because working through the potential challenges and ramifications of this trial is an incredible undertaking.

As CNN reported last week, once Pelosi transmits the articles, it unlocks an entire series of steps that quickly have to follow. No one wants to move ahead until everyone is on the exact same page about what that is going to look like.

As we've previously reported, once impeachment starts, the Senate has to convene every day at 12 p.m. for the trial. In order to do anything else, there has to be a unanimous consent agreement. That means all the senators have to be on the same page that they want to allow Biden to work through his agenda in the morning ahead of the impeachment trial unfolding every afternoon. Given the divisiveness of the moment, given the animosity some Republicans have about spending time on impeaching a President who won't even be in office, it's fair to consider whether an agreement like that is possible. Democratic Sen. Dick Durbin of Illinois, the incoming majority whip, told CNN's Jake Tapper on Sunday there are always "resistors," but he hoped that members could get behind dual tracking the day.

Things to watch for this week

There are five confirmation hearings on Tuesday for secretary of State, secretary of Treasury, CIA director, Defense secretary and secretary of Homeland Security. Aides say it is possible that the Senate could move as soon as Wednesday to confirm some of them to their posts hours after Biden is sworn in. Again, this takes agreement from all 100 senators. We should have more timing guidance Tuesday when the Senate returns.

When does Schumer become Majority Leader?

In order for Schumer to become majority leader, incoming Democratic Sens. Jon Ossoff and Raphael Warnock, both of Georgia, have to be sworn in. The state has until later this week to do that. Aides close to the process say the expectation is that certification will occur around January 20, but it's normal for the senators to not be sworn in until the day after that certification occurs. That means that it may actually be a day or so until Warnock and Ossoff are sworn in.

In other words, the timing is fluid. Don't assume that Schumer becomes majority leader on January 20. We don't know for sure.

One more thing to watch for this week

Leadership has been working through how the two parties will run the next Senate. Given the narrow Democratic majority (a tie with incoming Vice President Kamala Harris as the tiebreaker), aides have pointed out there is an expectation that Schumer and McConnell will come up with a power sharing agreement modeled after the one in 2001 between Trent Lott and Tom Daschle. The talks are still ongoing so we can't say for sure what that agreement will look like, but in 2001 the agreement allowed for evenly divided Senate committees, evenly divided budgets on the committees, equal access to common areas in the Capitol for both Republicans and Democrats and members from both parties were able to preside over the Senate. Those talks are ongoing just like the talks over how an impeachment trial may be run.