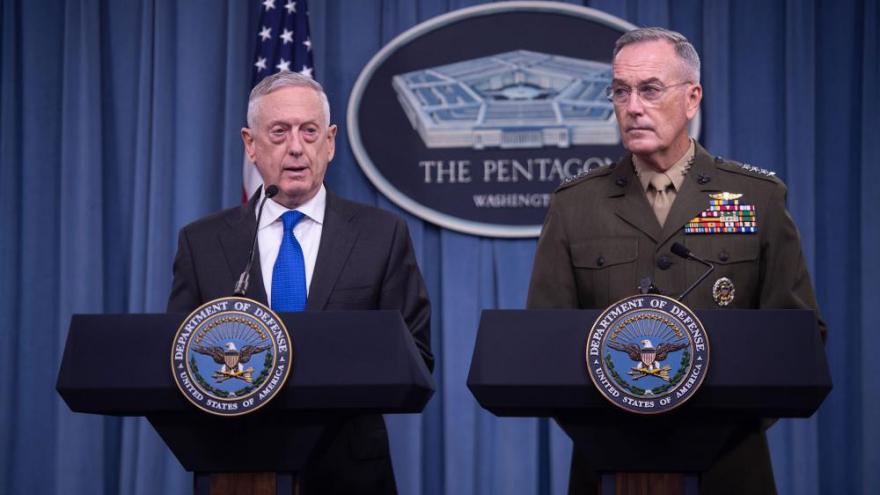 US Defense Secretary Jim Mattis (L) and chairman of the Joint Chiefs of Staff Gen. Joseph Dunford hold a press conference at the Pentagon in Washington, DC, on August 28, 2018.

(CNN) -- Former military officials who served under President Donald Trump are condemning the President and other leaders who have interfered with a peaceful transfer of power following Wednesday's breach of the US Capitol, when rioters attempted to stymy the ceremonial counting of the electoral votes that will affirm President-elect Joe Biden's win.

Trump's first secretary of defense, James Mattis, charged that Wednesday's "violent assault on our Capitol, an effort to subjugate American democracy by mob rule, was fomented by Mr. Trump," while Retired Gen. Joseph Dunford, the former chairman of the Joint Chiefs of Staff, told CNN that he believes "our leaders who have continued to undermine a peaceful transition in accordance with our Constitution have set the conditions for today's violence."

The military leaders issued their condemnation after rioters, incited by Trump, violently breached the US Capitol as lawmakers tallied Electoral College votes, forcing evacuation of the House and Senate and delaying the certification process.

Mattis, notably, did not address Trump as president in his statement, while asserting that "his use of the presidency to destroy trust in our election and to poison our respect for fellow citizens has been enabled by pseudo political leaders whose names will live in infamy as profiles in cowardice."

Dunford's comment on the day's violence, meanwhile, marked a departure from his tendency to stay out of political conversations since retiring.

"This is an outrageous assault on our democracy and a sad day for our Nation," Dunford said. "It's time for all Americans and particularly our elected officials to put our Country first. As many have said, we're better than this. I believe our leaders who have continued to undermine a peaceful transition in accordance with our Constitution have set the conditions for today's violence."

Despite pressure to call off the rioters, Trump appeared reluctant to condemn the day's violence. Only after pleading from aides and congressional allies inside the besieged Capitol building did the President release a taped video urging the mass of his supporters to "go home," while still fanning their baseless grievances about a stolen election.

In the same video, he praised the crowd, who broke into the Capitol using force, stole items from its rooms and posed for photographs in the legislative chambers.

Shortly after 1 p.m. ET Wednesday hundreds of pro-Trump protesters pushed through barriers set up along the perimeter of the Capitol, where they tussled with officers in full riot gear and eventually got into the building. At one point, an armed standoff took place at the House front door.

It took until roughly 5:40 p.m. ET for the building to once again be secured, according to the sergeant-at-arms.

DC police confirmed to CNN Wednesday that a woman had died after being shot in the chest on the Capitol grounds, and multiple law enforcement officers have been injured with at least one transported to the hospital, multiple sources tell CNN.

Several members of the President's party have also come out to condemn the stunning display of insurrection and President's handling of the events.

"What happened here today was an insurrection, incited by the President of the United States," Republican Sen. Mitt Romney, who has condemned GOP attempts to subvert the will of the voters in the presidential election, said in a statement.

"I am appalled by the reckless behavior of some political leaders since the election and by the lack of respect shown today for our institutions, our traditions, and our law enforcement," Bush said. "The violent assault on the Capitol -- and disruption of a Constitutionally-mandated meeting of Congress -- was undertaken by people whose passions have been inflamed by falsehoods and false hopes."