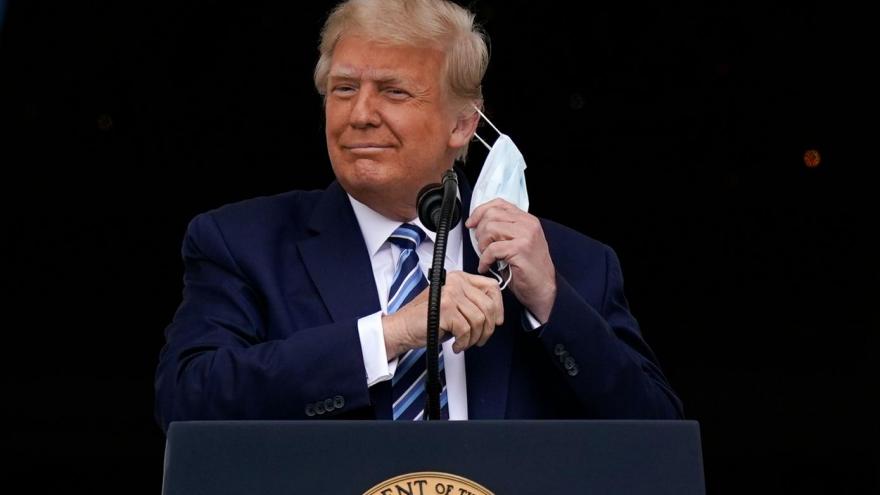 President Donald Trump removes his face mask to speak from the Blue Room Balcony of the White House to a crowd of supporters, Saturday, Oct. 10, 2020, in Washington.

"In response to your inquiry regarding the President's most recent COVID-19 tests, I can share with you that he has tested NEGATIVE, on consecutive days, using the Abbott BinaxNOW antigen card," Conley wrote, noting that those tests were taken "in context with additional clinical and laboratory data."

PCR suggests a polymerase chain reaction test, which looks for any evidence of the virus, although Conley did not say clearly what type of test was run.

It is also unclear on which consecutive days Trump tested negative -- and the Abbott BinaxNOW test might not be completely accurate. It's only been validated in people within the first seven days of symptom onset. Trump, who first announced he tested positive on Thursday, October 1, is more than 10 days out, and the US Food and Drug Administration has said it does not know how accurate the test is at that point.

The White House still has not revealed the last time Trump tested negative prior to his positive diagnosis, offering varying justifications for withholding that information.

Trump is "not infectious to others," Conley added.

The doctor's assessment came moments after the President was seen boarding Air Force One without a mask on his way to Sanford, Florida, where he will rally a large group of supporters, many of whom are not wearing masks. The campaign is conducting temperature checks and handing out masks and hand sanitizer, though there is no social distancing.

Earlier Monday, Trump campaign manager Bill Stepien, back to work at campaign headquarters after his own Covid-19 diagnosis, was asked during a briefing call whether the President would be able to hold rallies with the same stamina as he has in the past. Trump's signature "Make America Great Again" rallies often span well over an hour, some as long as 90 minutes.

"I've spoken with the President very single day since he entered Walter Reed. He is strong, he is energetic, he is raring to go. I think his campaign calendar reflects his health and well-being and enthusiasm to get back on the trail," Stepien told reporters, adding that Trump's return will be a "big shot in the arm for the campaign."

Senior adviser Jason Miller added that Trump is "on my case for not having enough rallies" and should be expected to be "out there, at least in the short term, two to three events a day," which will increase as Election Day approaches.

Conley deemed Trump clear to return to an "active schedule" in a Saturday memo after testing revealed "he is no longer considered a transmission risk to others."