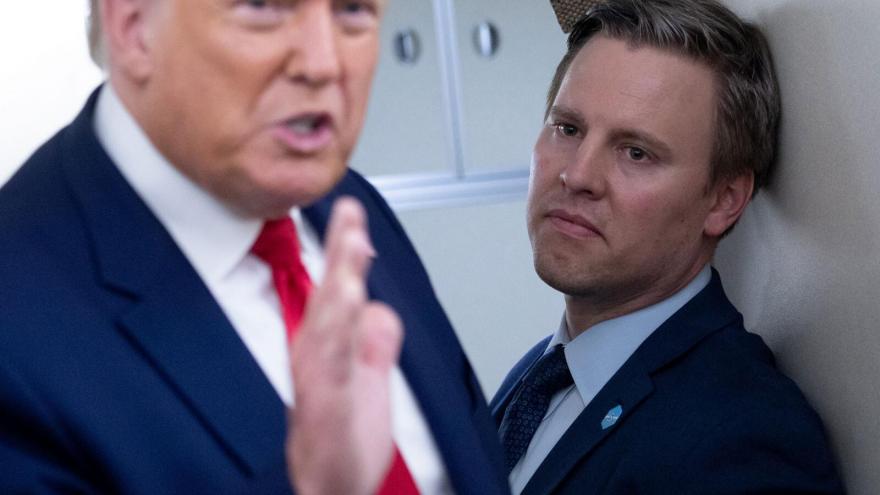 Campaign manager Bill Stepien stands alongside US President Donald Trump in this file photo. Stepien has tested positive for coronavirus, according to a senior official.

(CNN) -- President Donald Trump's campaign manager Bill Stepien has tested positive for coronavirus, according to a senior official, becoming the latest figure in the President's inner circle to be infected with Covid-19.

Stepien received the results of the test on Friday night and is suffering from what the official described as "mild flu-like" symptoms.

Stepien traveled to Cleveland with the President and his team on Tuesday for the first presidential debate and was seen in close proximity to Hope Hicks, the President's top aide who also tested positive.

Stepien was among a group of senior Trump campaign staffers who were tested, but he is the only one whose results came back positive so far. Deputy Campaign Manager Justin Clark's test results were negative.

He also attended debate prep sessions with former White House counselor Kellyanne Conway, who also announced on Friday that she had tested positive.

Stepien will work from home, the official said. Politico was first to report the positive result.

The news came at the end of the wild day that began when the President announced on Twitter just before 1 a.m. ET that he and first lady Melania Trump had tested positive for coronavirus. Before the day was over, Trump was being treated at Walter Reed National Military Medical Center and at least seven Republican politicians and close Trump confidants had announced they too had tested positive for Covid-19.

Stepien became campaign manager in July, when Trump replaced Brad Parscale, who had been serving in that role, with him on the same day that two national polls showed the President trailing presumptive then-presumptive Democratic nominee Joe Biden by double digits. He brought a vital understanding of data and metrics to the President's reelection bid looking to turn around sinking poll numbers in key battleground contests.

Prior to the shake up, Stepien served as deputy to Parscale, and before that held a senior role in Trump's administration as White House political director.

Trump adviser Jared Kushner recruited Stepien to join the Trump campaign and the two enjoy a close relationship. A source with knowledge of the hire told CNN at the time that Bannon played a key role in bringing on Stepien.

Stepien had served as campaign manager and deputy chief of staff to New Jersey Gov. Chris Christie, a close confidant and adviser to Trump. But Christie fired Stepien in January 2014 amid the Bridgegate scandal, in which Christie aides directed the closure of lanes on the George Washington Bridge as political retribution.

Stepien was ultimately not charged in the federal investigation into the lane closures. Court documents later revealed, however, that a Christie aide texted a colleague amid Christie's news conference on the bubbling scandal in December 2013 that Christie "just flat out lied about senior staff and Stepien not being involved."