Trump's and first lady's ballots have been returned in Florida 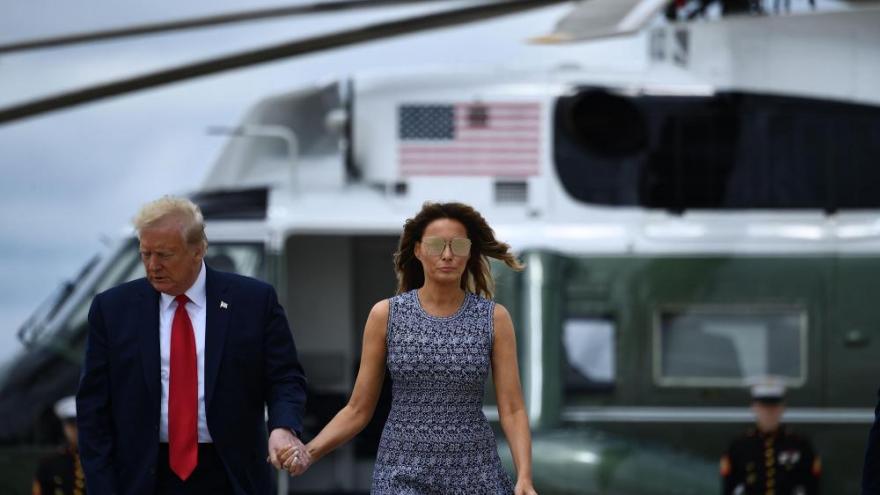 The ballots for US President Donald Trump and US first lady Melania Trump have been returned in Florida. This image shows Trump walking to Air Force One at Andrews Air Force Base May 27, 2020, in Maryland.

(CNN) -- President Donald Trump and first lady Melania Trump have voted in Florida's Tuesday congressional primary after designating someone to pick up and drop off their ballots in Palm Beach, an official familiar with the matter told CNN.

While the website of the Palm Beach County Supervisor of Elections does not yet denote Trump's ballot as returned and counted, the official said the ballots had been returned Monday.

Under Florida law, voters are permitted to sign an affidavit permitting someone else to pick up and drop off their ballots.

The Trumps signed affidavits and their ballots were picked up last week. That was after the deadline had passed for requesting a mail-in ballot, but the rules allow voters to pick up ballots in person after the deadline -- or send approved designees to pick them up.

As they did in March, when they voted in Florida's presidential primary, Trump and the first lady designated Alejando Garcia, a Republican Party member in Florida, as responsible for their ballots in the signed affidavits.

The President has repeatedly criticized universal mail-in voting as rife with fraud, even though no evidence exists for his claim. While rare instances of fraud from mail-in ballots do occur, it is nowhere near a widespread problem in the US election system.

A recent example of fraud from mail-in ballots took place in the 2018 midterm elections in a race where a GOP activist in North Carolina was accused of multiple felonies in connection with questionable absentee ballot activity in a congressional race on behalf of the Republican candidate.

Mail-in ballot fraud is exceedingly rare in part because states have systems and processes in place to prevent forgery, theft and voter fraud. These systems would apply to both absentee ballots and mail-in ballots for in-state voters.

Additionally, the President's distinction between mail-in voting and absentee voting has baffled experts, who say those voting systems are essentially the same.

And Trump, along with many of his aides, has employed mail-in voting or absentee voting in the past.

Trump could have voted early in-person during March's primary, and early voting locations were open in Palm Beach while he was visiting his Mar-a-Lago resort.

But despite driving past an open early voting location at least six times on the way to his golf course, Trump chose instead to utilize the mail-in ballot picked up and dropped off by a designee.