Trump won't be getting vaccine until it's recommended by medical team 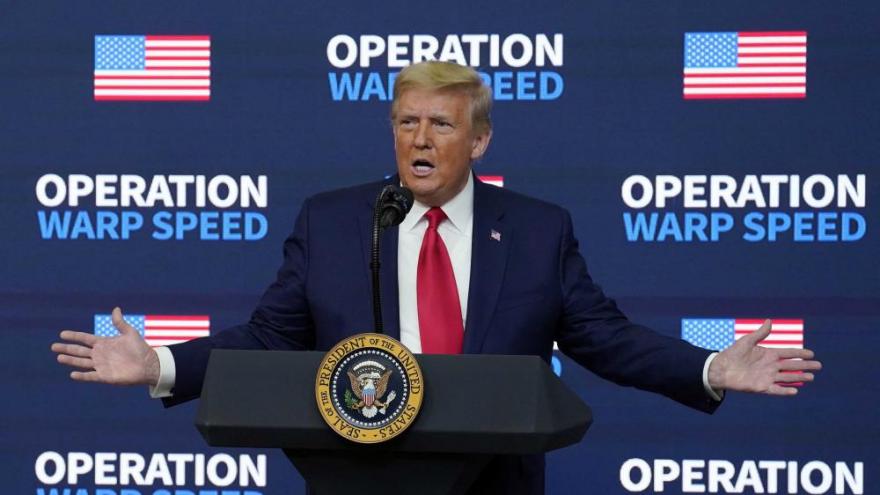 The official said Trump is still receiving the benefits of the monoclonal antibody cocktail he was given during his recovery from Covid-19 earlier in the fall.

Once Trump moves into a timing window to receive vaccination, he is likely to get his shot at that point, the official added.

Trump's situation differs from that of Vice President Mike Pence, who will receive his vaccination Friday morning, his office has announced. Pence has not contracted the virus, the official pointed out, meaning the vice president's need for vaccination is more pressing. Pence and second lady Karen Pence will be inoculated on camera at the White House, along with US Surgeon General Jerome Adams.

The official went on to say the President continues to be open to getting vaccinated. But the official cautioned Trump also wants to make sure frontline medical workers receive the vaccine first.

The news comes after the first doses of coronavirus vaccines were administered to the American public on Monday, after the US Food and Drug Administration authorized the groundbreaking vaccine late last week. The initial batch is being focused on health care workers and residents of long-term care facilities, per US Centers for Disease Control and Prevention recommendations, but some government officials are also slated to be inoculated in the early rounds of the vaccine.

Some have already been inoculated, with acting Secretary of Defense Christopher Miller receiving his vaccine Monday afternoon at Walter Reed National Military Medical Center. The Navy's top admiral, Chief of Naval Operations Mike Gilday, encouraged sailors on Tuesday to get the vaccine, adding that he plans to receive it "shortly."

Dr. Anthony Fauci, the director of the National Institute of Allergy and Infectious Diseases, said that he would recommend that both Trump and Pence receive the Covid-19 vaccine.

"Even though the President himself was infected and he has likely antibodies that likely would be protective, we're not sure how long that protection lasts," Fauci said Tuesday on ABC's "Good Morning America."

Health and Human Services Secretary Alex Azar said Monday that if Biden wants the newly released vaccine, the agency will ensure that he receives it.

Biden is expected to get his first Covid-19 vaccination early next week, CNN has learned, and plans to get his shot in public.

"I don't want to get ahead of the line, but I want to make sure we demonstrate to the American people that it is safe to take," Biden told reporters Wednesday in Wilmington, Delaware.

"When I do it, I'll do it publicly, so you can all witness my getting it done," the President-elect said.

Biden had told CNN's Jake Tapper during an interview earlier this month that he would "be happy to" get publicly vaccinated, as three of his presidential predecessors -- Bill Clinton, George W. Bush and Barack Obama -- said they would as a way to demonstrate its safety and efficacy.