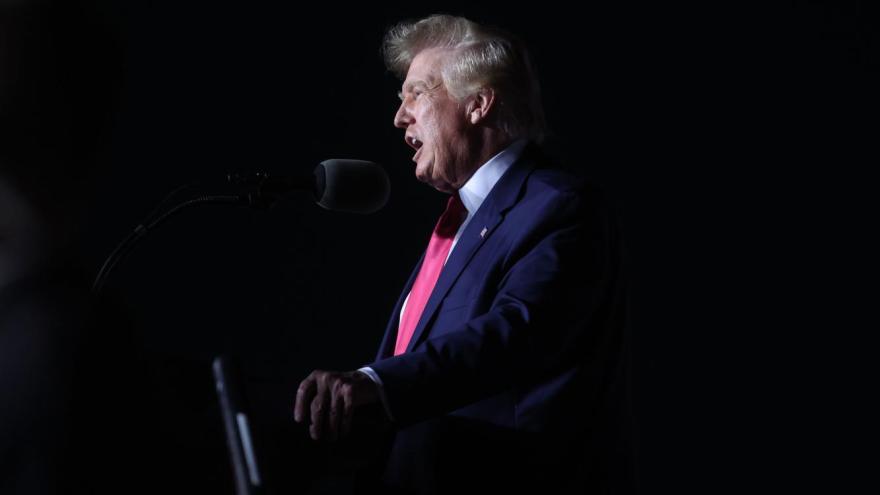 Donald Trump is considering waiting until after the November midterms to launch a third presidential campaign as he navigates an array of legal troubles and mounting concerns that some of his hand-picked Senate candidates may be weaker than he thought.

(CNN) -- Donald Trump is considering waiting until after the November midterms to launch a third presidential campaign as he navigates a widening array of legal troubles and mounting concerns that some of his hand-picked Senate candidates may be weaker than he once thought, sources familiar with his thinking tell CNN.

After months of eyeing Labor Day weekend as the target launch date for a 2024 campaign, Trump has spent the past few weeks backing away from that timeline following the FBI search of his Mar-a-Lago estate and an increased panic among Republicans that the party may not be in for the red wave it has long anticipated this November.

While his timeline could shift again between now and November, the onslaught of political and legal concerns has the former President feeling nervous about prematurely diving into the 2024 primary, according to nine former and current Trump aides and allies who requested anonymity to discuss internal matters.

The arguments from advisers wanting him to take his time with a campaign announcement have varied. Believing he will be the undisputed front-runner regardless of when he announces, some have said that if he launches another White House bid too early, he will run out of money around the time Republicans host their nominating convention, leaving him cash-strapped and vulnerable during the general election.

Better to address the legal fallout from the FBI search first, other advisers have told Trump and his team.

"Everyone was operating under the assumption that shortly after Labor Day would be the best possible time to launch, but that has changed and he's being told to deal with the FBI stuff first," said a Trump adviser.

Otherwise, advisers say, the former President is more likely to be blamed for potential losses in the midterms if he becomes a candidate for president before November and his legal troubles distract from the bread-and-butter issues most Republicans -- but especially those running in competitive races -- would prefer to focus on.

As Trump-backed Senate candidates in Pennsylvania, Ohio, and Arizona struggle to eclipse their opponents in fundraising and recent polls, a growing number of Trump confidants have shared concerns with him that a pre-midterm announcement would be weaponized by Democrats, who remain eager to distract from inflation and rising crime and are well-versed already in using Trump as a campaign foil.

"There is a direct tie if Trump becomes a campaign ad in November and Republicans lose the Senate, and the last thing he wants is to be blamed," said a former Trump campaign aide.

Trump himself has started complaining in private about Mehmet Oz's performance in the Pennsylvania Senate contest and a spate of bad press that Georgia Senate hopeful Herschel Walker generated earlier this summer when it became public that he had fathered several children out of wedlock despite routinely criticizing absentee fathers, this aide said.

In the days after federal investigators searched his waterfront residence in early August, Trump was inundated with calls from allies urging him to announce his bid for president immediately.

"It was so hot," said one Trump ally, describing the surging support Trump encountered among both grassroots supporters and top Republicans after he revealed the FBI had searched his home.

But as the legal battle over records seized during the search continues to play out and new details emerge about the sheer volume of classified records Trump was apparently storing haphazardly at Mar-a-Lago, others in Trump's orbit have urged him to put any campaign announcement on hold until he addresses his legal woes. The FBI warrant unsealed earlier this month revealed three possible federal crimes as reason for the search: violations of the Espionage Act, obstruction of justice and criminal handling of government records. In a late Tuesday court filing, the Justice Department said documents were "likely concealed and removed" from a storage room at Mar-a-Lago as part of an effort to "obstruct" the FBI's investigation. Trump, who has not been charged with a crime, has repeatedly denied wrongdoing while boasting that the FBI search has buoyed his 2024 prospects and sent a jolt of energy through his political base.

Another Trump adviser who had previously pushed for a pre-November campaign announcement has since recanted, joining those who believe that waiting until after the midterms is a more prudent approach.

"There's no urgency because he's not going to be outshined by someone else," said former Trump campaign aide Bryan Lanza, pointing to the crowd of potential 2024 rivals who rushed to Trump's defense -- or lobbed sharp criticism at the Justice Department -- after learning that federal investigators had executed a search warrant at his home.

"I personally feel like it's a sign of weakness if he announces before the midterm," said Matt Schlapp, a top Trump ally who chairs the American Conservative Union. Trump had previously considered a pre-midterm announcement as one way to clear the field of prospective challengers, something that Schlapp and others now say he no longer needs to worry about.

Some in Trump world still want him to announce now

Despite Trump being counseled by a growing number of advisers to delay his campaign announcement until later this fall or winter, not everyone in his inner circle has been convinced that that's the right move.

One source close to Trump dismissed the escalating political and legal concerns as "excuses," arguing that the former President is already being blamed for the shifting midterm forecast and putting off a presidential campaign launch is unlikely to inoculate him from further criticism among Republicans if the party either fails to win the Senate or disappoints in its overall gains.

"They are going to blame him no matter what, so he should just announce," this person said.

People familiar with Trump's thinking said he has been more receptive to postponing his campaign announcement until after the midterms in part because of the way Republicans rallied behind him following the FBI search. The former President has recently told allies he doesn't think he will face a formidable challenger in the 2024 GOP primary, according to three people familiar with his comments, one of whom said Trump has been quick to point out how Florida Gov. Ron DeSantis compared the FBI search to "Banana Republic" tactics. DeSantis is widely expected to be a top primary rival if he runs for the nomination against Trump.

"He's up to his eyeballs in legal troubles but that hasn't stopped him from totally relishing this," said a second person close to the former President, who requested anonymity for fear of retribution.

So far, the consensus among Republican operatives two years out from the 2024 election is that Trump is unlikely to face a real primary threat even though he is widely expected to field challenges from a handful of GOP hopefuls. Former Vice President Mike Pence, former New Jersey Gov. Chris Christie, and Maryland Gov. Larry Hogan are some of the likeliest rivals Trump could face if he does run again.

Schlapp, who believes Trump will indeed attract primary competitors, said none would be "serious in terms of being able to win the nomination." He added that Trump's outrage over the FBI search will give him something to tap into if and when he does announce a third presidential campaign.

"Sometimes I think he's better the more acrimonious he gets," Schlapp said, claiming that Trump's early August appearance at the Conservative Political Action Conference in Dallas was a turning point for some Republicans who were previously on the fence about his desire to mount a comeback bid after losing to Joe Biden in 2020.

Two days before federal investigators conducted their search of Mar-a-Lago, Trump used the speech to complain that he is "always being persecuted."

One of the Trump advisers took it a step further, suggesting that an indictment of Trump by the Biden administration "would be beneficial" to the former President at this juncture.

"It would just appear too partisan at this point," this adviser said.

Biden, who has insisted he had no advance warning of the search, has stressed the independence of the Justice Department. But Trump has frequently taken to his social media platform to blast what he's called a politically motivated "witch hunt" and railed against the FBI and Biden, including in a frenzy of posts on Truth Social on Tuesday alone.

While Trump hasn't made a firm timing decision yet as he mulls a 2024 bid, his lack of planning for a campaign rollout has signaled to those around him that he wants to bide his time.

Until adding former Florida Solicitor General Chris Kise to his legal defense team on Tuesday, Trump had been struggling to navigate the legal jeopardy he finds himself in as federal investigators sift through the classified documents they seized from his residence -- possibly building a criminal case in the process.

Those around him say Trump appears to be putting his political ambitions on the backburner -- if only temporarily -- to give his legal team space to operate and strategize without the time constraints that a presidential campaign would demand. The former President has spent the three weeks since the FBI conducted its search at Mar-a-Lago trying to capitalize on the moment politically, while his attorneys have meanwhile struggled to develop a clear strategy. His legal team waited until weeks after the search, for example, to file a so-called special master request for an independent review of the materials taken from his home, which is the subject of a hearing this week.

"Right now, it's a question of whether he wants to turn everything political or gain some legal stability to make sure everything turns out OK before taking that next step," said one of the Trump advisers.