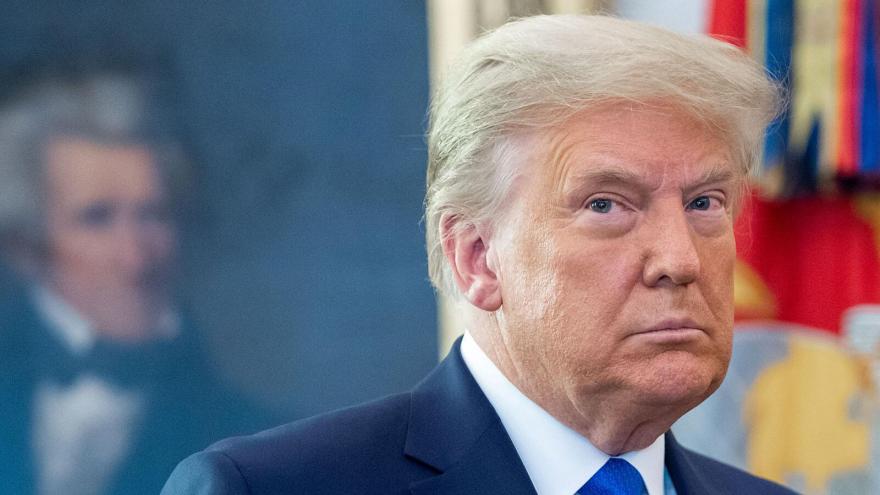 In a briefing Thursday, China's Ministry of Foreign Affairs spokesman Wang Wenbin described the accusation as slanderous and said it was "completely nonsense and completely fake news."

News of the briefing and the administration's intention to declassify the information was first reported on Wednesday by Axios.

Information of this alleged intelligence is thus far uncorroborated. The scenario is reminiscent of reports earlier this year that Russia allegedly offered Afghan militants bounties to kill US forces in Afghanistan. That information also appeared in the President's intelligence briefing although it was later revealed that the information likely went unnoticed for weeks.

Trump has yet to publicly call Russia out on the issue.

In the regular press briefing Thursday, Wang said China "has always pursued an independent foreign policy of peace" and "never initiated a war to others, let alone funded non-state actors to attack other countries."

"China supports the process of peace and reconciliation in Afghanistan, and does not get involved in the internal conflicts in Afghanistan," he added.

While it's unclear whether President-elect Joe Biden has seen the intelligence, he would have had access to the same intelligence since he receives the President's Daily Brief.

A Biden transition official told CNN that while they would not speak to the alleged intelligence reporting, nor the motivation behind "the release of what is reported to be uncorroborated information," the President-elect "has no greater concern than the safety of our service members" and will hold to account anyone who endangers Americans.

"Our teams will seek to learn as much as we can about these allegations from the outgoing administration, and this is another illustration of why we need full cooperation, including from the Department of Defense," the official added, referring to the contentious transition process between incoming Biden and outgoing Trump defense officials.

The White House didn't immediately respond to a request for comment.

CNN reported in June that Russian intelligence officers for the military intelligence agency GRU had recently offered money to Taliban militants in Afghanistan as rewards if they killed US or UK troops there, according to a European intelligence official. The official told CNN the incentives offered by the Russians had, in their assessment, led to coalition casualties, which would be service members' deaths or injuries. The official did not specify as to the date of the casualties, their number or nationality, or whether these were fatalities or injuries.

A US official with knowledge of the matter confirmed to CNN at the time that there was intelligence indicating money was transferred, but it is not clear how verified the intelligence in question was or who exactly the representatives of this Russian unit approached -- top leaders or commanders of field units located to the coalition forces.

US intelligence had concluded months prior that Russian military intelligence offered the bounties, amid peace talks, and Trump was briefed on the intelligence findings and the White House's National Security Council held a meeting about it in late March, according to the New York Times, citing officials briefed on the matter.

After the news broke in June, Trump denied receiving a briefing about the intelligence. He tweeted that "there have not been many attacks" on US troops by Taliban fighters as his evidence that the reported intelligence may be "phony" -- a step further than an earlier statement from the White House in which press secretary Kayleigh McEnany did not deny the validity of the report, but instead said Trump and Vice President Mike Pence were not briefed "on the alleged Russian bounty intelligence."

There was discussion as far back as February and March in the US intelligence community and among the top military commanders about the Russian operation to assess the intelligence and what exactly was happening, a US official told CNN in June. There were some efforts at protecting US forces because of the intelligence, the source also said.

News of China offering cash for attacks on US forces comes as China awaits whether Biden will embrace Trump's more punitive policies towards the nation or move to reset relations between Washington and Beijing.

Diplomacy during the Obama-Biden administration was guided for the most part by attempts at cooperation with China, rather than confrontation. But there is evidence that Biden's views have shifted in recent years in line with the changing mood in Washington, where Beijing is increasingly viewed not as America's potential partner, but as its primary rival.

"To win the competition for the future against China or anyone else, we must sharpen our innovative edge and unite the economic might of democracies around the world to counter abusive economic practices," it states.

A Biden campaign ad in June accused Trump of getting "played" by China. And during the Democratic primaries in February, Biden referred to Chinese President Xi Jinping as a "thug," and said that Beijing had to "play by the rules."