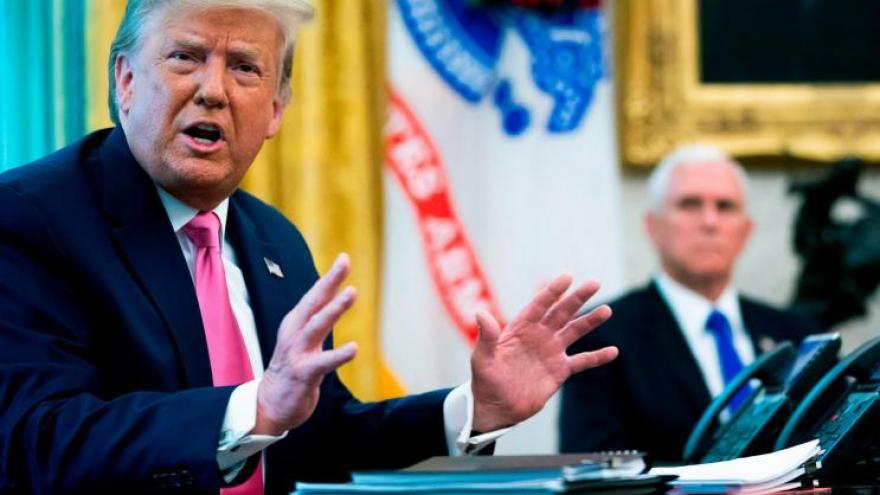 President Donald Trump was aware his vice president had been evacuated to a secure location as rioters stormed the US Capitol, according to a person who was with Trump on January 6.

(CNN) -- President Donald Trump was aware his vice president had been evacuated to a secure location as rioters stormed the US Capitol, according to a person who was with Trump on January 6.

And while Trump never attempted to contact Vice President Mike Pence directly, infuriating Pence's team, he did express concern for Pence to advisers gathered in the dining room off the Oval Office over the course of the afternoon, said Gen. Keith Kellogg, who was among the aides surrounding Trump.

Kellogg's account comes amid conflicting reports of what the former President knew about the danger his vice president and members of Congress were in on January 6 and when he knew it.

After returning to the White House from his midday rally on the Ellipse, Trump and his aides had gathered around the flat-screen television in the presidential dining room as his supporters began storming the Capitol, according to Kellogg.

Trump at the time was irate with Pence for informing him he would not attempt to overturn the election results. The former President continued to focus on the electoral count well into the afternoon.

As images on television played of rioters entering the Capitol, rushing past security barriers, Trump asked aides whether Pence was safe, according to Kellogg, who was Pence's national security adviser but was with the President that day.

Aides informed Trump the vice president was under Secret Service control and had been taken to a secure location, Kellogg said.

"Absolutely he was concerned about Pence," he said of Trump. Kellogg had been in communication with the vice president through Pence's staff at the Capitol. They were communicating back to the White House and getting that information to Kellogg.

Another person familiar with the situation confirmed Kellogg's account to CNN.

At 2:24 p.m. ET, Trump tweeted that Pence lacked "courage," a message that came minutes after the vice president had been rushed off the Senate floor and to a secure location. People in the room said they did not fully understand how bad the situation was at the time the tweet was sent as they do now in hindsight.

In the ensuing minutes, however, the severity of the situation became more apparent. Aides gathered in the dining room weighed how to respond, ultimately convincing Trump to tweet to the protesters to be peaceful -- a sentiment he initially resisted, another source familiar with the matter said.

Another source involved pushed back on that characterization, saying it was a very dynamic environment and there were several versions of the tweet being passed around.

At one point, officials at the White House were made aware of a plan to evacuate Pence to Joint Base Andrews, which never ultimately transpired. Pence remained at the Capitol and later returned to the Senate chamber to oversee the Electoral College certification.

Separately, on the night before the January 6 rally, Trump heard protesters gathering for the next day's rally from the Oval Office, according to a person familiar with the matter. The energy from the crowd prompted Trump to ask what could be done to put maximum pressure on lawmakers to object to the Electoral College certification.

Aides told him his speech would be the focal point of the day.