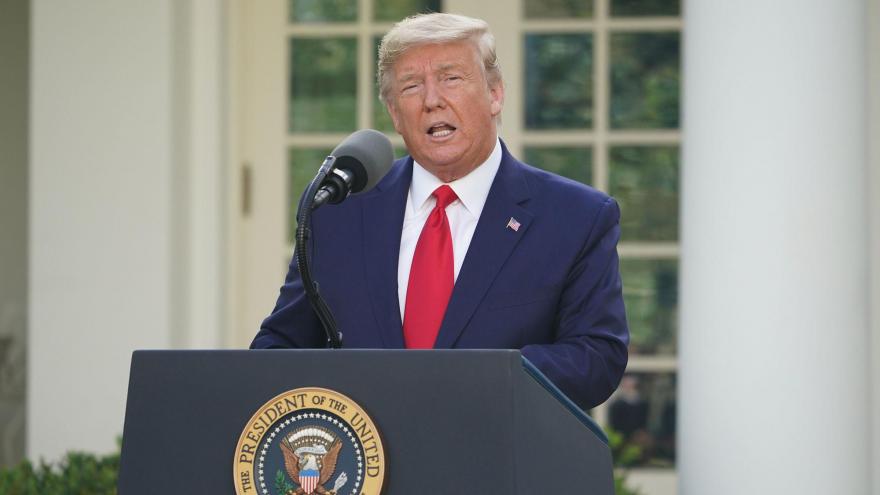 President Donald Trump speaks during a Coronavirus Task Force press briefing in the Rose Garden of the White House in Washington, DC, on March 30, 2020.

(CNN) -- President Donald Trump warned of a "painful" and "tough" two-week stretch ahead as he extended nationwide distancing measures that -- even if followed closely -- could still mean more than 100,000 and up to 240,000 Americans die from coronavirus.

It was a stark message from a President who spent weeks downplaying the severity of the virus and questioned its potential impact in the United States.

Trump did not minimize what has become the gravest public health crisis in decades during his remarks that stretched more than two hours on Tuesday. Instead, he advised Americans that darker days are still to come.

"I want every American to be prepared for the hard days that lie ahead. We're going to go through a very tough two weeks," Trump said, setting expectations for a dire fortnight where death rates spike.

After he spoke, the top health officials on Trump's task force presented a series of slides showing their models for how the social distancing measures might help prevent potentially millions of deaths.

But in a dire prediction, Dr. Deborah Birx said that even if the federal guidelines are followed precisely, between 100,000 and 240,000 deaths could still occur -- a number that well surpasses the American death toll in the Vietnam War.

Officials were quick to say they didn't accept that figure as predetermined, and noted that high case counts in New York and New Jersey were pulling the projections higher. But the model laid bare the potential devastation the outbreak could inflict.

"As sobering a number as that is, we should be prepared for it," Dr. Anthony Fauci, another top medical expert on Trump's team, told reporters. "We're going to do everything we can to get it significantly below that."

The presentation on Tuesday was the first time the administration offered official projections for how many Americans might die from the virus, which is ravaging certain parts of the country and has spread to all 50 states.

Trump offered a new level of sobriety in his discussion of the models, though he remained insistent his administration had handled the outbreak adequately and refused to accept responsibility for early testing failures, which he blamed on previous administrations.

The sharp turnaround from his earlier dismissals was best illustrated in his insistence Tuesday that coronavirus is "not the flu -- it's vicious," despite insisting over the past month the two were similar.

Trump admitted he has been reluctant to step in front of cameras with bad news, even as some encouraged him to adopt a graver tone.

"I don't want to be negative," he said. "This is easy to be negative about but I want to give people hope too. You know, I'm a cheerleader for the country."

But he also seemed to still be grasping the extent to which the country is gripped by the ongoing crisis.

"It's an incredibly dark topic. An incredibly horrible topic. And it's incredibly interesting. That's why everybody is, they're going crazy, they can't get enough of it," he said.

Not all of Trump's advisers supported the decision to extend the distancing guidelines, and some have privately questioned the models his health advisers used to convince him the distancing efforts were necessary, multiple people familiar with the matter said.

Trump faced intense pressure from business leaders and some conservative economists to reopen some parts of the country before ultimately deciding against it.

His officials said Tuesday the distancing guidelines were the only thing preventing up to 2.2 million deaths, a figure derived from a British study that Trump has cited repeatedly.

"There is no magic bullet. No magic vaccine or therapy. It's just behavior," Birx said.

Amid the internal debate over whether to ease the social distancing efforts, some aides recommended the President only extend them another 15 days, but health advisers argued a month was necessary, people familiar with the discussions said. Trump told aides it would be better to ease the guidelines earlier than expected rather than have to extend them again.

The guidelines -- which include recommendations to avoid large crowds and work from home -- are expected to last until April 30.

Trump has explained his decision as a necessary one to protect potentially millions of lives. To that end, Trump and the coronavirus task force delved into more detail on their models using graphs and information during the daily late-afternoon press briefing at the White House on Tuesday.

Those predictions don't have universal support inside the White House. There remains a concern among some skeptics on Trump's team that Birx and Fauci have put stock in models that could be wrong.

Epidemiological models rely on assumptions and can't, by their nature, always be 100% accurate. Much about the virus's spread remains unknown, particularly with persistent problems on getting Americans tested.

Fauci said the projections could change depending on how the pandemic unfolds.

"We don't accept that number, that that's what it's going to be," he said. "We want to do much better than that."

Tuesday marked the expiration of the initial 15-day period for the federal social distancing guidelines that Trump announced earlier in March. He announced Sunday the guidelines would be extended another 30 days.

Health experts have warned that without adequate testing, it's impossible to know how many people have been infected and which areas are better off. Contact tracing -- the practice of determining who an infected person may have interacted with -- also requires robust testing efforts, and is another step experts have said is necessary to containing the virus.

Vice President Mike Pence, who is leading the coronavirus task force, said during Tuesday's briefing that 100,000 Americans per day were now being tested for coronavirus.

Fauci and Birx presented Trump the models showing between 100,000 and 200,000 deaths during an Oval Office meeting on Sunday that seemed to resonate and helped him finalize his decision.

CNN also reported on Monday morning that Trump was struck by grave images from Elmhurst Hospital in Queens, near where he grew up, showing hospital workers inundated with coronavirus cases. The scene helped solidify his decision that further distancing measures were necessary to prevent the disease from spreading.

Polling presented to Trump also helped him determine that asking Americans to keep refraining from going to crowded workplaces or schools would not necessarily be unpopular.

As Trump codifies the extension of the guidelines, he and his advisers are weighing another recommendation with potential political fallout: that Americans being wearing masks or other face coverings, a reversal from earlier federal guidance that indicated such a step wasn't necessary.

"My feeling is if people want to do it, there's certainly no harm to it," he said. "I would say do it, but use a scarf if you want, rather than going out and getting a mask or whatever."

Fauci told CNN on Tuesday it would be up for "very active discussion" by the task force.