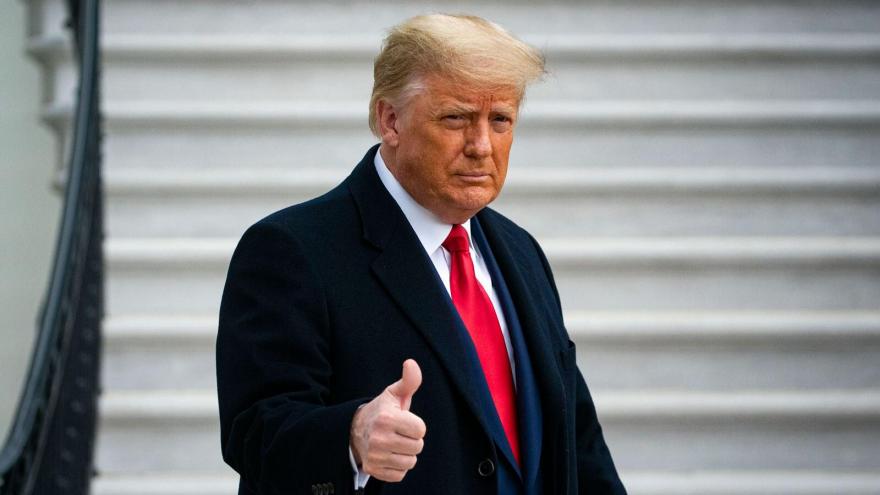 U.S. President Donald Trump gives a thumbs up as he departs on the South Lawn of the White House, on December 12, 2020 in Washington, DC. Trump is traveling to the Army versus Navy Football Game at the United States Military Academy in West Point, NY.

(CNN) -- President Donald Trump on Wednesday vetoed the sweeping defense bill that both chambers of Congress recently passed by veto-proof majorities, setting up what could be the first veto override of his presidency, which would pit members of his own party against him.

The House is expected to act Monday, when all eyes be watching to see how many Republicans stick with their previous support for the bill. House Minority Leader Kevin McCarthy has suggested many Republicans won't vote to override Trump's veto, despite having voted for the bill itself, so it's unclear if the override attempt will be successful or if the veto will be sustained.

Trump had previously threatened to veto the defense bill, known as the National Defense Authorization Act, because it doesn't include a repeal of Section 230, a law that shields internet companies from liability for what is posted on their websites by them or third parties.

This year's bill includes provisions to limit how much money Trump can move around for his border wall and another that would require the military to rename bases that were named after figures from the Confederacy.

Trump's position on the bill sharply divided GOP lawmakers, forcing them to choose between loyalty to the President and legislation that sets defense policy for the country -- a choice they'll now have to make again.

With full membership in the House currently at 430, supporters of the bill will need 288 votes to override the President's veto. Thirty-seven Democrats voted against the bill when it came to the floor on December 8, though it's unclear at this point whether some might change their votes to try and overcome the veto.

If the veto stands in the House, there will be no vote needed in the Senate. But if it is overridden in the House, senators will return to Washington on Tuesday at noon to begin processing the override vote.

The Senate voted overwhelmingly to approve the massive funding bill with a veto-proof majority of 84 to 13, a major rebuke to the President.

Leadership aides in each party said Wednesday there are many possible options for how Senate action could play out so it's difficult to predict exactly how long it will take. With full cooperation from 100 senators, they could move directly to an override vote on Tuesday and then leave town again. However, the process could get more complicated if GOP Sen. Rand Paul of Kentucky filibusters the override measure, which he has hinted he may do.

If Paul chooses to drag out the process as far as possible under the rules, that vote to overcome the filibuster would take place Thursday and a final vote on the veto override could take place possibly later Thursday or Friday.

The uncertainty about whether the President will veto the Covid-19 stimulus and government spending bill, however, may affect the Congressional schedule, with government funding running out Monday at midnight.

"Unfortunately," the President wrote in his veto message to Congress, "the Act fails to include critical national security measures, includes provisions that fail to respect our veterans and our military's history, and contradicts efforts by my Administration to put America first in our national security and foreign policy actions. It is a 'gift' to China and Russia."

Trump's veto sparked an immediate rebuke from GOP Sen. Jim Inhofe, the chairman of the Senate Armed Services Committee, who said that the defense bill must become law.

"The NDAA has become law every year for 59 years straight because it's absolutely vital to our national security and our troops. This year must not be an exception. Our men and women who volunteer to wear the uniform shouldn't be denied what they need— ever," Inhofe tweeted.

The Oklahoma Republican went on to say that the defense bill "cements all the remarkable gains our military has made thanks to @realDonaldTrump's leadership," adding, "I hope all of my colleagues in Congress will join me in making sure our troops have the resources and equipment they need to defend this nation."

"I look forward to overriding the President's fruitless and ridiculous attempt to undermine our national security over his shifting rationale for his decision to veto, including a provision to rename bases honoring Confederate military leaders -- a provision that many in the President's own party have supported," the Virginia Democrat said in a statement.

"In a time when our country was just targeted with a massive cyberattack, it is particularly hard to understand the reasoning behind the President's irresponsibility," the California Democrat said in a statement.

The $740 billion bill also includes pay raises for America's soldiers, modernizations for equipment and provisions to require more scrutiny before troops are withdrawn from Germany or Afghanistan.

Trump singled out Section 230 in his message, calling it a "very dangerous national security risk."

He also went after the requirements for changing the names of military installations named after Confederate soldiers and slave owners.

"Over the course of United States history, these locations have taken on significance to the American story and those who have helped write it that far transcends their namesakes," Trump said. "My Administration respects the legacy of the millions of American servicemen and women who have served with honor at these military bases, and who, from these locations, have fought, bled, and died for their country. From these facilities, we have won two World Wars. I have been clear in my opposition to politically motivated attempts like this to wash away history and to dishonor the immense progress our country has fought for in realizing our founding principles," the message says.

The President also said the act "directly contradict(s) my Administration's foreign policy, particularly my efforts to bring our troops home. I oppose endless wars, as does the American public."

While Trump's previous veto threats drew swift and sharp bipartisan pushback from lawmakers who have argued that he is using leverage over the troops to settle personal scores, he has received vocal support from some allies.

Sen. Lindsey Graham, a South Carolina Republican and chairman of the Senate Judiciary Committee, had backed the President on his push to remove Section 230.

"I support President @realDonaldTrump's insistence Section 230 repeal be part of the defense authorization bill," he wrote in a three-tweet thread. "Big Tech is the only industry in America that cannot be sued for their business practices and are not meaningfully regulated. This must come to an end."

The conservative House Freedom Caucus announced ahead of the House vote that its members will side with Trump in his opposition to the legislation and was pressuring other GOP members to side with Trump as well.