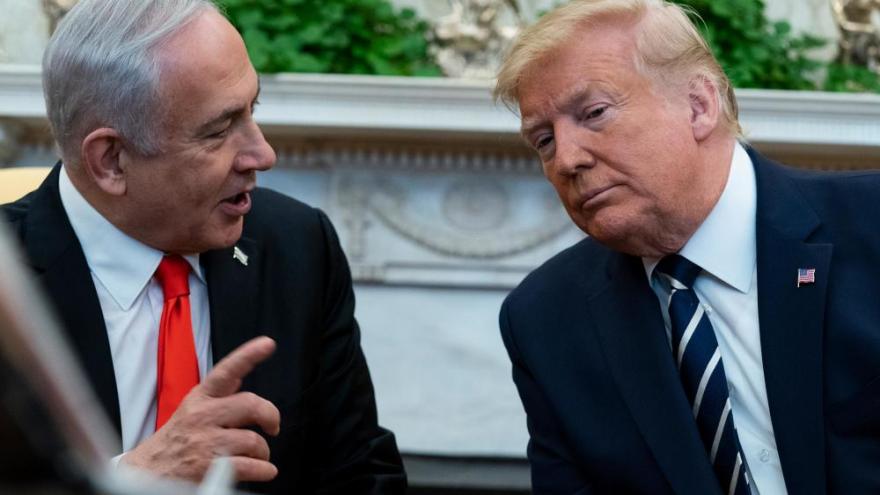 President Donald Trump listens to Israeli Prime Minister Benjamin Netanyahu during a meeting in the Oval Office of the White House, Monday, Jan. 27, 2020, in Washington.

(CNN) -- President Donald Trump on Tuesday proposed a Middle East plan that he claimed was a "realistic two-state solution" but caters to nearly every major Israeli demand and was immediately rejected by Palestinians.

It lays the groundwork for Israel to immediately begin annexing all of its settlements in the West Bank with US backing and also foresees the eventual establishment of a Palestinian state with limited sovereignty after a transition period. Palestinian negotiators have not had direct contact with the Trump administration in more than two years.

Under the proposal, Trump said Jerusalem "will remain Israel's undivided capital," but that a future Palestinian state would also have a "capital in eastern Jerusalem." Trump did not address the question of Palestinian refugees and whether they will have a right of return to their former homes. And he said neither Palestinians nor Israelis would be uprooted from their homes under the plan.

The plan envisions a Palestinian capital in the Arab neighborhoods of Jerusalem on the eastern side of the separation barrier, physically separated from the rest of the city. Those neighborhoods include Kafr Aqab, Abu Dis and Shuafat. The plan allows for the Palestinians to call their capital "al-Quds," using the Arabic term for Jerusalem, but includes no significant part of East Jerusalem and is well short of what the Palestinians would ever accept as their portion of the holy city.

Beyond proposing a new framework for negotiations between Israelis and Palestinians, the Trump plan gives Israel the green light to annex Israeli settlements regardless of Palestinian support for the plan, but mandates Israel freeze any further settlement expansion for four years in exchange for US recognition of Israeli sovereignty over the settlements.

Israeli Prime Minister Benjamin Netanyahu said he will move to take the first steps in annexing West Bank settlements on Sunday. Full Israeli annexation of those territories will make it much more difficult for a future Israeli government to trade off territory with the Palestinians under a future peace agreement, if the Trump proposal is discarded.

Trump said the plan would "double" the Palestinian territories and a map tweeted out by the President also indicated that Israel is prepared to provide swaths of land in the Israeli desert (near Gaza and the Egyptian border) for a future Palestinian state. But ultimately, the plan demands Palestinians give up on claims to nearly 30% of the West Bank, US Ambassador to Israel David Friedman said.

The heavy pro-Israel tilt of Trump's peace proposal was evident in the optics of the unveiling. When Trump presented his administration's long-anticipated proposal to resolve the Israeli-Palestinian conflict at the White House on Tuesday, Netanyahu was at his side and dozens of right-wing supporters of Israel -- including the megadonor Sheldon Adelson and GOP members of Congress -- flanked the podium.

The head of the Palestinian Authority, meanwhile, was thousands of miles away and Palestinians were quick to criticize the plan.

Palestinian Authority President Mahmoud Abbas called the plan "the slap of the century."

Speaking at the presidential complex in Ramallah in the West Bank, he said the Palestinian position has not changed in the two years since the US recognized Jerusalem as the undivided capital of Israel.

The Palestinian ambassador to the United Kingdom told CNN that Trump "killed the prospect of a negotiated solution" and called the unveiling "a political circus."

That juxtaposition was the central and startling backdrop to the unveiling of a proposal three years in the making that skewed more heavily in Israel's favor than any previous American proposal to end the conflict. Still, the plan called for the creation of a Palestinian state -- something that seemed uncertain in the build-up to the plan's release.

Trump insisted his plan was different from past failed attempts at brokering peace between Israelis and Palestinians. And he made a nod to the absent party, saying the Palestinians deserve a "far better life" than their current situation.

Trump said the plan proposed a "realistic two-state solution" that does not compromise Israel's security. And he said Israel's leaders told him the proposal would provide the basis for direct negotiations with Palestinians.

"My vision presents a win-win opportunity for both sides, a realistic two-state solution that resolves the risk of Palestinian statehood to Israel's security," Trump said. "Today, Israel has taken a giant step toward peace."

But Trump acknowledged that in order for his plan to have any hope of taking hold, "it's only reasonable that I do a lot for the Palestinians, or it wouldn't be fair" -- a nod to the proposal of a Palestinian state and the $50 billion economic plan his administration unveiled last summer to jolt the Palestinian economy.

Trump called the agreement a "historic opportunity for the Palestinians to finally achieve an independent state" and warned: "This could be the last opportunity they will ever have."

Trump said he had sent a letter to Abbas, the Palestinian leader, laying out the criteria for Palestinian statehood -- among them key governance measures, a rejection of political violence and new human rights legislation -- and encouraging him to seize the opportunity.

"President Abbas, I want you to know that if you choose the path to peace, America and many other countries will -- we will be there," Trump said.

And even in Israel, the plan's release is already being viewed through a political lens -- as an attempt by Trump -- whose own Senate impeachment trial is underway -- to bolster his ally Netanyahu, who is facing bribery and corruption charges as well as another election in just over a month. Adding to the controversial split-screen moment, Netanyahu was formally indicted on charges of bribery and fraud and breach of trust in three separate corruption cases on Tuesday -- just hours before he was set to join Trump at the White House.

Trump administration officials, meanwhile, insist it is an earnest, if unorthodox, effort to resolve the decades-old conflict, pointing to their invitation of Netanyahu's political rival, Benny Gantz, to see the plan as proof that it is apolitical.

Trump sounded circumspect about the chances of success for his own plan as he welcomed Netanyahu into the Oval Office on Monday ahead of the plan's release.

"We're going to show a plan that's been worked on by everybody, and we'll see whether or not it catches on," Trump said. "If it does, that would be great. And if it doesn't we can live with it too. But I think it might have a chance."

The plan's release follows more than a year of unprecedented political uncertainty in Israel -- including two elections that failed to produce a governing coalition -- that have repeatedly delayed the rollout. Ultimately, Trump administration officials decided to release their proposal ahead of the latest Israeli election, quietly hoping that the proposal could unite Netanyahu and his political rival Benny Gantz into leading a broad-based parliamentary coalition, sources familiar with the dynamic have said.

Some Middle East experts have argued that the plan -- given the lack of Palestinian involvement and the release's proximity to upcoming Israeli elections -- is squarely aimed at bolstering Netanyahu, giving him a statesman-like moment weeks before the Israeli election. It's also a move that emphasizes the importance of Netanyahu's close ties to the Trump administration.

The White House proposal on Tuesday is expected to address the conflict's most central and intractable political issues, from the status of Jerusalem to borders and security, Israeli settlements and the right of return for Palestinian refugees. It will build on a $50 billion economic proposal unveiled last June, which called for international investment, grants and loan over 10 years to spur the Palestinian economy if there is first a political resolution to the conflict.

The President's son-in-law and senior adviser Jared Kushner, who has helmed the peace effort, pitched the proposal during a "Peace to Prosperity" conference in Bahrain, emphasizing the potential for economic growth in the Palestinian territories and in the Middle East more broadly if Israel and Palestinian leaders can agree to a peace deal.

But the economic proposal was met with a thud in the Palestinian territories, where mistrust in the Trump administration reigns following a steady stream of policy moves that have bolstered Israel and undermined the Palestinian position: from US recognition of Jerusalem and the Golan Heights as sovereign Israeli territory to cutting off all US support for aid projects aimed at helping Palestinians.

The White House's peace team has also repeatedly criticized Palestinian leaders, but shown a near-total aversion to criticizing the Israeli government. Jason Greenblatt, a co-author of the White House plan who left the administration last fall, told CNN in June that he had not "found anything to criticize" on the Israeli side. At the time, Greenblatt said he hoped neither side took unilateral action before the plan is released. Now, the Trump administration's actions give rise to a potential scenario that they will give Israel a perceived green light to act alone with the plan's unveiling.

Ahead of the peace plan release, speculation reached a fever-pitch about the extent to which the Trump administration will propose Israel annex swaths of the Palestinian territories. As the Trump administration prepared to release its proposal, Netanyahu's rival Gantz joined him last week in vowing to annex the Jordan River Valley that separates the Palestinian West Bank from Jordan, though Gantz said he would do so in coordination with the international community.

Senior Trump administration officials have repeatedly emphasized that Israel's security needs have only increased in the years since previous proposals have been on the table, suggesting that the Trump proposal will lean toward bolstering those Israeli security needs. But they have also said that there will be elements of the plan that will be appealing to Palestinians.

Throughout the process, though, Trump administration officials have refused to say whether their plan will back the notion of a two-state solution to the conflict, raising the question of whether the proposal will accede to Palestinian demands for a sovereign state. Calls for a Palestinian State, even if conditioned on demands the Palestinians would never accept, has already been flatly rejected by at least some of Israel's hardline right-wing.

Trump administration officials have made clear, though, that they are leaning on increasingly close relations between Israel and Sunni Arab countries in the Middle East, a rapprochement largely borne out of tensions with Iran. Gulf countries, like Saudi Arabia, have signaled that they could take their relationships with Israel out of the shadows and into the open if there is a resolution to the Israeli-Palestinian conflict.

Trump administration officials hope those Arab countries will wield their influence to encourage Palestinians to at least consider this proposal though Trump said many of the Arab countries have already agreed to the plan. But those countries have been noticeably quiet to this point, hesitant to endorse a plan that has not yet been unveiled.