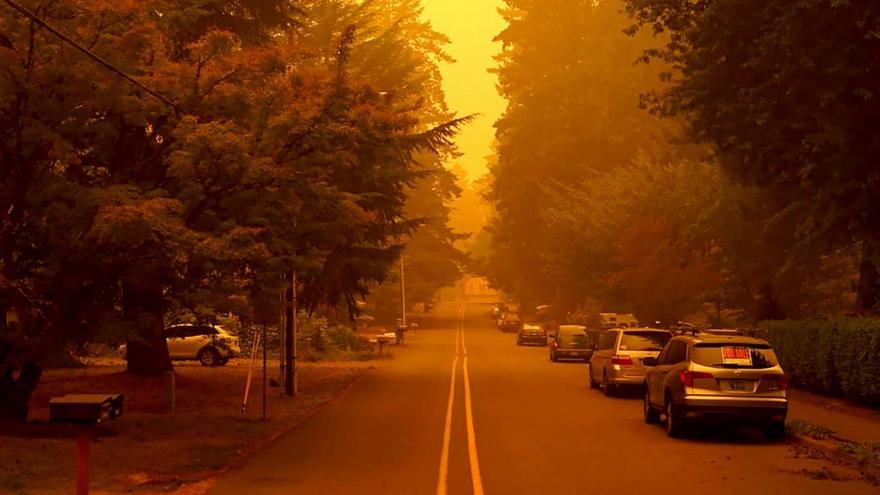 In a photo provided by Christian Gallagher, a street in West Linn, OR, is shrouded by smoke from wildfires, Thursday, Sept. 10. President Donald Trump on Friday night thanked the firefighters and first responders battling the historic wildfires raging in the western part of the United States.

(CNN) -- The White House on Saturday announced President Donald Trump will soon visit California, hours after Trump thanked the firefighters and first responders battling the historic wildfires raging in the western part of the United States.

Trump's public acknowledgment of the crisis comes after weeks of remaining largely silent on the fires that have killed over two dozen people and burned millions of acres.

Trump will visit McClellan Park, California, on Monday for a briefing with local and federal fire and emergency officials on the state's wildfires, the White House said Saturday. The President was already set to visit Reno, Nevada, on Saturday, where he is likely to see firsthand evidence of the devastating fires, as the National Weather Service in Reno issued a dense smoke advisory through Sunday.

Over the past few weeks, Trump hasn't tweeted about the devastating wildfires, despite regularly posting to his Twitter feed. His relative silence adds to his history of offering little empathy in the face of natural disasters, and tendency to attack Democratic leaders for their handling of crises.

But on Friday, he posted to Twitter: "THANK YOU to the 28,000+ Firefighters and other First Responders who are battling wildfires across California, Oregon, and Washington."

The President also said he approved funds to "support their brave work" and added, "We are with them all the way!"

Trump mentioned the wildfires over an hour into his speech at a rally Saturday night in Minden, Nevada.

"Our hearts are with all of the communities in the West battling devastating wildfires," Trump told his supporters, adding that "my administration is closely coordinating with state and local leaders."

Trump repeatedly said the fires are about "forest management," a characterization he has repeatedly offered of such blazes that has been previously criticized as inaccurate.

Trump had last addressed the wildfires during an August 23 news conference, announcing the approval of a disaster declaration for California and that the federal government had deployed thousands of first responders and personnel to the area.

"Our hearts go out to the thousands of families who have lost their homes," he said. "As we grieve for the families of two first responders and five residents who have tragically lost their lives in a very horrific fire -- one of the biggest we've ever seen."

During a mid-August rally, as flames burned north of the Bay Area, his familiar response was to blame the state's forest management for not heeding his advice of cleaning the forests' floors.

The White House said 24 fire management grants have been approved since mid-August for Colorado, Montana, Oregon, Utah, Washington and Wyoming. Trump also approved an emergency declaration for Oregon on Thursday.

"The President continues to support those who are battling raging wildfires in a locally-executed, state-managed, and federally-supported emergency response," White House deputy press secretary Judd Deere said in a statement Saturday.

The White House, along with the Federal Emergency Management Agency, have remained in "constant contact" with state and local officials throughout the response to the fires, the statement said.

California Gov. Gavin Newsom said Friday that he spoke with Trump by phone for 30 minutes Thursday, during which he gave the President a status report.

"He reinforced his commitment to our effort and we were grateful," Newsom, a Democrat, said in a news briefing.

A historic figure of more than 3.1 million acres have burned in California, which experts and state leaders contribute to climate change.

Trump has been skeptical about the climate crisis, even burying a study in 2018 produced by his own administration warning of the potentially catastrophic impact of climate change.

Democratic presidential candidate Joe Biden on Saturday sent his thoughts to those affected in the wildfires and used the opportunity to criticize Trump's approach to the climate crisis.

"The science is clear, and deadly signs like these are unmistakable -- climate change poses an imminent, existential threat to our way of life," Biden said in a statement. "President Trump can try to deny that reality, but the facts are undeniable. We absolutely must act now to avoid a future defined by an unending barrage of tragedies like the one American families are enduring across the West today."

As of Saturday morning, at least 26 people have been killed in the wildfires and dozens more are missing, officials say. Hundreds of thousands of people have been forced to evacuate and hundreds have lost their homes in the massive infernos. The victims include a 1-year-old boy in Washington state and a young teen in Oregon, who in his last moments huddled with his dog inside a car as it was engulfed in flames.

This story has been updated to include the President's announced trip to California, comments from Democratic presidential nominee Joe Biden and President Donald Trump's comments at a Saturday night rally.