Trump to travel to Kenosha, Wisconsin, on Tuesday 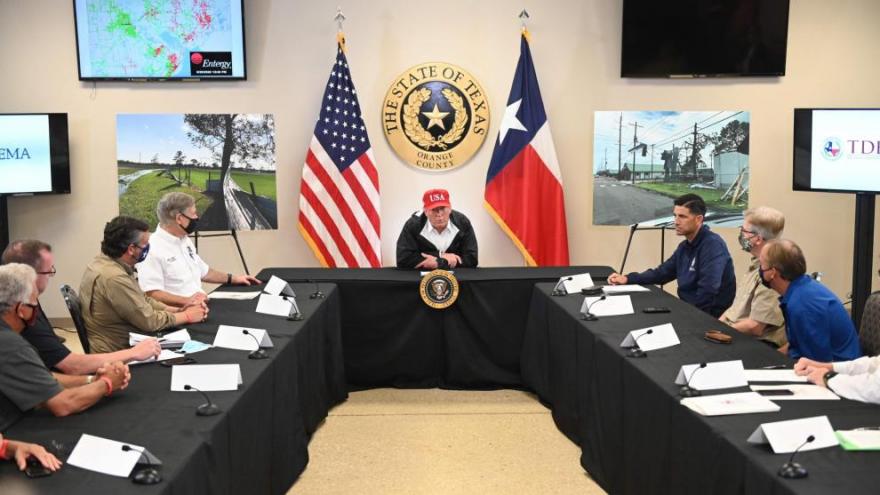 US President Donald Trump, here attending a briefing at an emergency operation center in Orange, Texas, on August 29, 2020, will travel to Kenosha, Wisconsin, on Tuesday to meet with law enforcement and to survey some of the damage from the recent protests.

(CNN) -- President Donald Trump will travel to Kenosha, Wisconsin, on Tuesday to meet with law enforcement and to survey some of the damage from the recent protests, the White House announced Saturday evening.

When asked if the President would meet with the family of Jacob Blake, a 29-year-old Black man who was shot by police, White House spokesman Judd Deere said that the schedule hasn't been fully ironed out yet.

Blake's family led a march of hundreds of people on Saturday in Kenosha, demanding an end to police violence and systemic racism. Blake, who was shot by a White police officer, has undergone multiple surgeries.

Unrest in Wisconsin following the police shooting of Blake in Kenosha has quickly turned into a political flashpoint in one of the nation's most important swing states.

When asked earlier Saturday if he will visit Kenosha, Trump said, "probably so" before praising the federal presence in Wisconsin.

"Probably so. We've had tremendous success as you know. We were finally able to get the go ahead from the local authorities to send in the National Guard," Trump said. "Within a few minutes of the guard, everybody cleared out and it became safe."

Trump and the GOP used this week's Republican National Convention to shine a spotlight on violence and property damage that has resulted from some of the protests over racial injustice and police brutality this summer -- as fires had raged in Kenosha on consecutive nights.

The way voters in Wisconsin interpret Blake's shooting and its aftermath could be central to November's outcome in a state Trump won by fewer than 23,000 votes in 2016. Trump was the first Republican to carry Kenosha County in 44 years.

Joe Biden and Kamala Harris, the 2020 Democratic presidential and vice presidential nominees, said Wednesday that they spoke to Blake's family. Blake's father said Friday that his hour-long conversation with Biden and Harris was akin to "speaking to my uncle and one of my sisters."

Blake's father said Friday his family had not heard from the White House regarding his son's shooting. A White House official told CNN on Wednesday that efforts had been made to connect Trump with the Blake family.

Trump, when asked in an interview Friday night if he thought the officer who shot Blake was justified, said, "I'm looking into it very strongly. I'll be getting reports and I'll certainly let you know pretty soon."

Protests have raged in Kenosha following Blake's shooting. Wisconsin Gov. Tony Evers on Tuesday declared a state of emergency, deployed members of the Wisconsin National Guard to Kenosha and implemented an 8 p.m. CT curfew. Buildings and cars in Kenosha have been set on fire, and two people were killed and a third was seriously wounded in a shooting during a protest.