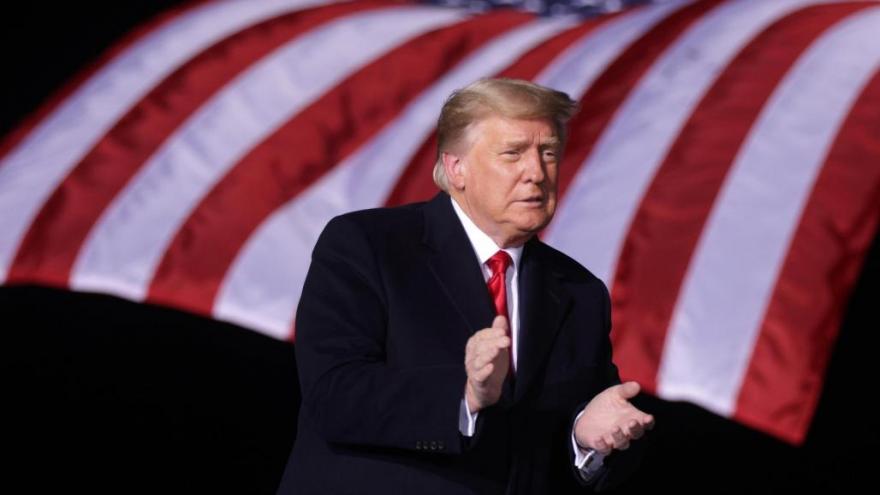 (CNN) -- Former President Donald Trump repeated his election lies on stage at the Conservative Political Action Conference in Orlando, Florida, Sunday, looking to reclaim his role as the Republican Party's kingmaker in the 2022 midterm elections and positioning himself for a 2024 presidential run.

"It is far from being over," Trump said. "We will be victorious and America will be stronger and greater than ever before."

Repeating his false claims that he won the November election, which President Joe Biden won resoundingly with 306 to Trump's 232 electoral votes, Trump teased a White House run in four years: "I may even decide to beat them for a third time," the one-term former President said in his first public remarks since leaving the White House.

During a lengthy speech in which he baselessly claimed that the US has a "very sick and corrupt electoral process" and accused the Supreme Court of failing to "have the courage" to overturn the election on his behalf, he called for a new round of voting restrictions, claiming, falsely, that mail-in ballots and early voting were responsible for Biden's win. After boasting that it has "been stated" that his endorsement "is the most powerful asset in politics," Trump closed out his speech by asking supporters to contribute to his political action committees as he hinted about his future plans.

Trump has remained unbowed and unapologetic since the January 6 insurrection, his political capital among Republicans scarcely diminished even after he was impeached for a second time by the US House, with 10 Republican votes, and then acquitted by the US Senate, with seven GOP senators joining Democrats in the vote to convict him.

On stage Sunday, he named all the Republican lawmakers who voted against him -- calling them "grandstanders" -- and saving special ire for Wyoming Rep. Liz Cheney, the No. 3 Republican in the House, who he referred to as a "warmonger."

He targeted Biden throughout much of his speech, attacking his immigration policies, accusing him of taking credit for the Trump administration's work on vaccines and demanding that he "get the schools open."

Without any evidence, he claimed that Biden's policy changes are triggering a new crisis at the Southern border and creating a youth migrant crisis. He touted his own efforts as president to expand the border wall and said Biden was reversing his administration's accomplishments.

To allay concerns among Republicans about the splintering within the GOP, Trump dismissed any discussion that he was contemplating starting a new political party: "We have the Republican Party," he said to applause. "It's going to unite and be stronger than ever before," Trump said at the gathering, which has served as an audition for other potential Republican presidential hopefuls.

Trump won the unscientific straw poll of CPAC attendees when they were asked who they favored as 2024 GOP presidential candidates. But the results suggest that there is interest in other potential candidates. Two polls were conducted, one that included Trump's name and one that did not. In the straw poll that included Trump, 55% of attendees said they preferred the former President as their nominee for 2024, another 21% favored Florida Gov. Ron DeSantis, while South Dakota Gov. Kristi Noem was third with 4%.

In a second poll that excluded Trump, DeSantis was far ahead of the other contenders at the event that took place in his home state. In that poll, 43% of CPAC attendees supported DeSantis, a close ally of Trump. Noem was second with 11%, followed by Donald Trump Jr. at 8%, then former Secretary of State Mike Pompeo and Texas Sen. Ted Cruz with 7% each.

The overwhelming majority of CPAC attendees who participated in the gathering's informal surveys said they approved of the job that Trump did as president. But only 68% said they wanted him to run again in 2024; 15% said they don't want the former President to vie for the GOP nomination and 17% said they were unsure -- indicating the opening for a fresh face within the party.

While charting his next political act over the past month from his post-presidential retreat at Mar-a-Lago in Palm Beach, Trump has refused to take any responsibility for his role in inciting his supporters to violence during the January 6 storming of the Capitol during the certification of the November election results -- an event that has exacerbated divisions within the GOP about Trump and his role in the party moving forward.

GOP Sen. Bill Cassidy -- who voted to convict Trump earlier this month -- said Sunday that he believes if the Republican Party focuses on Trump to win back seats in 2022 and the presidency in 2024, "We will lose."

"If we idolize one person, we will lose," the Louisiana Republican told CNN's Dana Bash on "State of the Union." "And that's kind of clear from the last election."

Although he has prominent critics in the party, most GOP leaders have stood by Trump as state and local party officials have moved to censure Republican lawmakers who favored his impeachment. The former President has been holding court in Florida not only with one-time aides like his former campaign manager Brad Parscale, but also visitors like House Minority Leader Kevin McCarthy, who has pledged to work with Trump to regain the majority in 2022, and Republican National Committee Chairwoman Ronna McDaniel.

Foreshadowing Trump's influence on the 2022 races, McCarthy lavished praise on Trump during a Saturday panel at CPAC, crediting him with Republicans' better-than-expected showing in the 2020 House races: "We got closer than anybody thought we could get... No one said we'd win seats," McCarthy said of GOP efforts to win the majority last November. "But this is the little secret. You know why we won that? President Trump worked on all these races."

Indiana GOP Rep. Jim Banks, the chairman of an influential group of House conservatives, took a shot at Republicans who have been disloyal to Trump during the same panel, warning that efforts to curtail his influence could harm the party in 2022 as they try to regain the majority in the US House and the Senate.

That certainty about Trump's reign in the Republican Party has emboldened the former President as he seeks to put his imprint on the upcoming elections. After raising millions of dollars off his false claims of election fraud, Trump is weighing the creation of a new super PAC that could raise unlimited amounts of money with very few restrictions, CNN's Fredreka Schouten and Jim Acosta reported Saturday.

In filings with the Federal Election Commission Saturday, Trump also expanded his potential reach by converting both his presidential campaign committee, Donald J. Trump for President, and his leadership PAC, Save America, into two political action committees that can support other candidates for office.

In the discussions with aides about the 2022 midterms and future election cycles, Trump has been weighing how to exact revenge on the House members and Senators who cast impeachment votes against him — and the new committees could serve as his vehicle for doing that.

He made one of his first steps in that direction Friday when he threw his support behind Max Miller, who is challenging one of the House members who voted to impeach Trump -- Ohio Rep. Anthony Gonzalez. Explaining his reasons for running Friday, Miller charged that Gonzalez "betrayed" his Northeast Ohio constituents when he voted to impeach the former President.

The deference to the former President after the events of January 6 that stunned the world has underscored Trump's firm command of the party's base even as much of America recoiled from his election lies and his dangerous maneuvering to overthrow the democratic process.

Though polls showed a dip in Trump's support after the Capitol insurrection, his approval ratings among Republicans have since rebounded. Three-quarters of Republicans said they wanted to see Trump play a prominent role in the GOP going forward, according to Quinnipiac University Poll released earlier this month, even though 68% of Americans said the former President did not do enough to stop the insurrection.

Trump's speech at CPAC also gave him another shot at revisionist history about his handling of the Covid-19 pandemic not long after the nation marked 500,000 deaths from coronavirus. Speakers at the political conference largely panned President Joe Biden's $1.9 trillion relief package, which narrowly passed the House early Saturday morning with all Republicans and two Democrats opposing the bill.

Trump, who oversaw the rapid development of coronavirus vaccines through the task force known as Operation Warp Speed, said his administration deserves much of the credit for the current pace of vaccinations in America and repeatedly referred to Covid-19 using a racist term.

"Never let them forget this was us. We did this," Trump said of the vaccine development.

Though Biden has set a goal of getting most K-12 students back to in-person instruction by the end of his first 100 days, Trump accused Biden and Democrats of capitulating to teachers' unions, which have cited concerns about children returning to school when their members have not been vaccinated.

"There's no reason whatsoever why the vast majority of young Americans should not be back in school immediately," said Trump, hammering an issue that the GOP hopes to use against Democrats in the 2022 midterms.

And although the Biden administration has said that teachers should be prioritized for vaccinations and dedicated at least $130 billion to reopening schools in the President's $1.9 trillion Covid relief package that passed the House early Saturday morning, Trump said school funding was "a very small part" of the legislation.

Biden offered a diametrically different message about fighting the virus on Saturday morning as he pressed for the passage of his relief package in the Senate: "We have no time to waste. If we act now, decisively, quickly and boldly, we can finally get ahead of this virus."

"We can finally get our economy moving again, and the people of this country have suffered far too much for too long," Biden said in remarks at the White House. "We need to relieve that suffering."