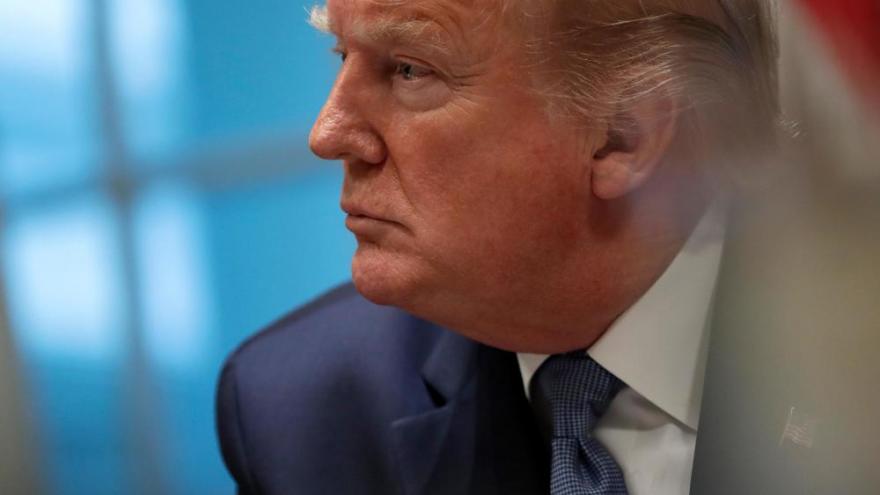 President Donald Trump will sign an executive order on Wednesday to interpret Judaism as a nationality and not just a religion.

(CNN) -- President Donald Trump signed an executive order on Wednesday to include discrimination against Jews as a violation of law in certain cases, with an eye toward fighting anti-Semitism on college campuses.

It's an order that would allow Trump to take further steps to combat anti-Israel sentiments and divestment movements on college campuses by requiring colleges and universities to treat those movements as discriminatory or risk losing their funding.

The order would apply in cases where anti-Semitism is involved and applies only to discrimination concerns. A senior administration official told CNN on Wednesday that the order "does not 'define' Judaism at all. The (order) represents a legal judgment that discrimination against Jewish people is sometimes covered by Title VI."

A White House official confirmed to CNN on Tuesday that the order would interpret Judaism as a nationality and not just a religion. The executive order released on Wednesday was not that specific.

The order released Wednesday evening interprets Title VI of the Civil Rights Act of 1964 -- which "prohibits discrimination on the basis of race, color, and national origin in programs and activities receiving Federal financial assistance" -- as protecting from anti-Semitism. The Department of Education can withhold federal funding from any college or educational program that violates Title VI, according to the Civil Rights Act.

Religion is not covered in that portion of the law. Muslim, Hindu and Sikh students are also protected from discrimination under Title VI based on their shared ancestry or ethnic characteristics.

The definition of anti-Semitism will be adapted from the State Department, according to the order. The State Department cites the International Holocaust Remembrance Alliance (IHRA), which defines anti-Semitism as "a certain perception of Jews, which may be expressed as hatred toward Jews. Rhetorical and physical manifestations of antisemitism are directed toward Jewish or non-Jewish individuals and/or their property, toward Jewish community institutions and religious facilities." The US is a member of the alliance.

Jared Kushner, the President's son-in-law and a senior White House adviser, pushed for the executive order, according to The New York Times, which first reported the order.

Trump, in announcing the order, said Wednesday that "the vile, hate-filled poison of anti-Semitism must be condemned and confronted everywhere and anywhere it appears."

The order generated widespread reaction from Jews and Jewish groups, with some calling it a necessary measure against what they see as a rising tide of anti-Semitism on campuses and others calling it a chill on free speech.

The BDS movement, which stands for Boycott, Divestment and Sanctions, aims to "end international support for Israel's oppression of Palestinians" and boycott Israel for its activities in the West Bank and Gaza. The global movement has gained traction on some college campuses across the US, which critics say has led to Jewish students feeling targeted.

The move to combat what the administration views as anti-Semitism on college campuses comes in the wake of remarks Trump made over the weekend that several Jewish groups said promoted anti-Semitic stereotypes. In a speech to an Israeli-American organization, he suggested that many of the attendees at the event were wealthy and in real estate, and that their wealth would guide their votes in the 2020 presidential election.

Trump drew similar condemnation in 2015 when he told a group of Jewish Republicans, "You're not going to support me because I don't want your money."

Jonathan Greenblatt, the CEO of the Anti-Defamation League who said he has seen a draft of the executive order, said it "reaffirms protection" of Jews "without infringing on First Amendment rights."

"In a climate of rising anti-Semitism, this Executive Order provides valuable guidance on anti-Semitism, giving law enforcement and campus officials an important additional tool to help identify and fight this pernicious hate," Greenblatt, whose group tracks anti-Semitic incidents, said in a statement.

The Simon Wiesenthal Center commended the order, tweeting that it "sends a global message at a time of surging #antisemitism on both sides of Atlantic," and Israel's Foreign Minister, Yisrael Katz, welcomed the upcoming announcement and called on other countries to follow the Trump administration's lead.

"These are significant steps in the ongoing fight against antisemitism and the BDS movement on college campuses," Katz said in a statement Tuesday evening.

But Jeremy Ben-Ami, the president of J Street, a progressive Jewish advocacy group, argued that the executive order was designed to have a "chilling effect on free speech and to crack down on campus critics of Israel" rather than fight anti-Semitism.

"We feel it is misguided and harmful for the White House to unilaterally declare a broad range of nonviolent campus criticism of Israel to be anti-Semitic, especially at a time when the prime driver of anti-Semitism in this country is the xenophobic, white nationalist far-right," he said in a statement.

On Twitter, Greenblatt said the executive order was similar to the Anti-Semitism Awareness Act, which was unanimously passed by the Senate in 2016 but didn't advance to a vote in the House. The bill had called for the IHRA definition of anti-Semitism to be referred to when the Department of Education assesses whether there has been a violation of Title VI of the Civil Rights Act. The legislation was reintroduced in the Senate in March with bipartisan support, but there has been no action since then on the measure.

Democratic Rep. Ted Deutch of Florida, who is Jewish, had argued in a recent Times of Israel op-ed that the United States ought to adopt the IHRA definition of anti-Semitism across all federal agencies, expanding the use of the definition beyond the Education and State Departments.

"This will not only send a clear message of support to the American Jewish community that feels under increasing threat by the rise in anti-Semitic attacks, but it would lay the groundwork for a whole-of-government strategy to combat anti-Semitism," Deutch wrote.

In recent years, there has been a growing divide on Israel between the Democratic Party's high-ranking officials and a few progressive political newcomers, such as Reps. Rashida Tlaib and Ilhan Omar, who have backed the BDS movement this year.

The Democratic-led House approved a resolution in July opposing the boycott movement against Israel, and some Democratic senators voted against a Senate bill in January that included allowing state and local governments to withhold contracts from those who participate in the BDS movement. The senators had argued that while they oppose boycott efforts, the measure would infringe on First Amendment rights, though it eventually passed.

Meanwhile, the Trump administration has moved to further align the US with the policies of Israeli Prime Minister Benjamin Netanyahu. Whereas the US has traditionally called for a two-state solution to the Israeli-Palestinian conflict, Trump has offered public flexibility on the matter.

Last month, the Trump administration announced a major reversal of the US' longstanding policy on Israeli settlements in the occupied West Bank, rejecting a 1978 State Department legal opinion that deemed the settlements "inconsistent with international law." The announcement, which breaks with international law and consensus, is the latest in a string of hardline, pro-Israeli moves that have further inflamed tensions between the Trump administration and Palestinians.

The policy reversal was hailed by right-wing Israeli leaders and Netanyahu, who faces criminal indictment in three corruption probes as he fights to remain the country's leader after two indecisive elections.

UPDATE: This story and its headline have been updated following the release of the executive order to clarify how Jews will be protected by Title VI of the Civil Rights Act.