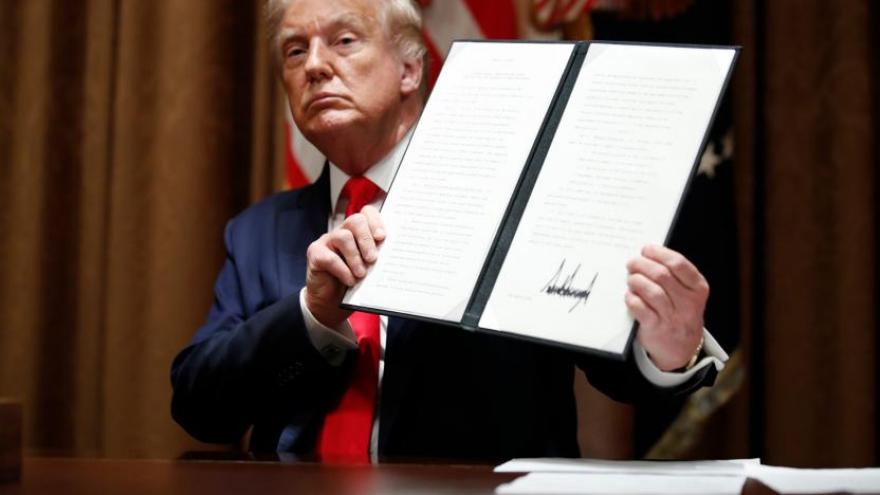 President Donald Trump will sign an executive order on August 6, 2020 directing some federal agencies to only purchase certain drugs and medical materials when they are made in the United States.

(CNN) -- President Donald Trump signed an executive order on Thursday directing some federal agencies to prioritize purchasing certain drugs and medical materials when made in the United States.

The scope of the order remains unclear, because it will direct the FDA to produce a list of "essential medicines, medical countermeasures and critical input" that will be covered by the new requirements.

The move will undoubtedly mark a shift in the way the US sources its drugs and medical supplies moving forward.

"The executive order will require that US government agencies purchase all the essential medicines that we need from American sources," Trump said during a speech at a washing machine plant in Ohio. "The executive order will also sweep away unnecessary regulatory barriers to domestic pharmaceutical production and support advanced manufacturing processes that will keep our drug prices low and allow American companies to compete on the world's stage."

White House trade adviser Peter Navarro previewed the action earlier Thursday saying the US is "dangerously overdependent on foreign nations for our essential medicines, for medical supplies ... and medical equipment like ventilators."

The order "establishes a base level of demand to attract a level of investment sufficient to provide for the needs we have for these things we need in times of trouble," Navarro, a trade hawk, added.

China has been the dominating global player in the production of Personal Protective Equipment (PPE). And in the US, 90% of all prescriptions are filled by generic drugs and, one in every three pills consumed is produced by an Indian generics manufacturer, according to an April 2020 study by the Confederation of Indian Industry (CII) and KPMG.

India gets around 68% of its raw materials -- known as active pharmaceutical ingredients (APIs) -- from China.

Thursday's executive order will also eliminate some regulatory barriers for manufacturing and pharmaceuticals in the US. Specifically, Navarro said the order would target manufacturing regulations imposed by the US Food & Drug Administration and the Environmental Protection Agency.

Some experts have urged for improvements to be made to the medical supply chain, but their suggested solution hasn't necessarily been to move all drug and medical equipment manufacturing processes to the US.

Dr. Amesh Adalja, who focuses on emerging infectious diseases, pandemic preparedness and biosecurity issues at the Johns Hopkins University Center for Health Security, said the solution may be "that we have a stable supply chain, that has some redundancy in it in case there is supply shock." That redundancy, he said, could include multiple manufacturers for the same drug or piece of equipment in more than one country.

Adalja also said the order may have an effect opposite of its intent -- increasing the price of drugs and medical supplies in the US.

"We do have many drugs that we supply that are supplied from foreign manufacturing chains. This kind of an action is disruptive and there's going to be adjustment and transition costs that are accrued from it. And we know this is going to increase the cost of drugs likely," Adalja said. "This will be something that will eventually be reflected in higher prices as companies seek to keep the same profit margin on what they're doing. They're going to have to think about raising prices."

The US Chamber of Commerce urged caution, saying: "careful implementation will be key to avoid driving up prices while strengthening supply chain security."

"Americans benefit from being able to procure medical products from a wide variety of domestic and international sources, and while shortages of a limited range of products must be addressed, different solutions are needed for different products," said Myron Brilliant, the chamber's executive vice president said.

"Every time you see a negative Big Pharma commercial against me remember, it means your drug prices are coming way down!" Trump tweeted on Wednesday.

During his speech in Ohio on Thursday, Trump complained about the ads and suggested that his actions on drug pricing and manufacturing have made him many enemies.

"So, I have a lot of enemies out there. This may be the last time you'll see me for a while. A lot of very, very rich enemies, but they are not happy with what I'm doing. But I think we have one chance to do it, and no other president's going to do it," he said.