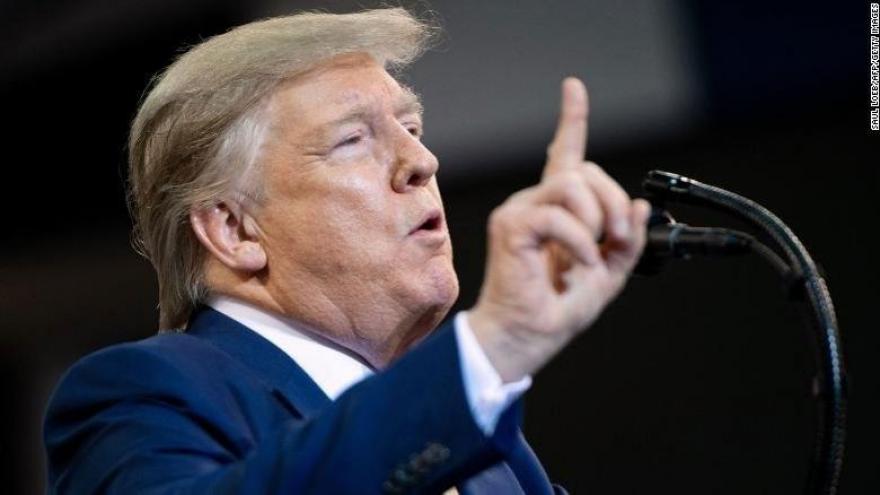 President Donald Trump announced that the US will "restore" steel and aluminum tariffs on Brazil and Argentina, citing a "massive devaluation of their currencies."

(CNN) -- President Donald Trump announced Monday that the US will "restore" steel and aluminum tariffs on Brazil and Argentina, citing a "massive devaluation of their currencies."

"Brazil and Argentina have been presiding over a massive devaluation of their currencies. which is not good for our farmers. Therefore, effective immediately, I will restore the Tariffs on all Steel & Aluminum that is shipped into the U.S. from those countries," Trump tweeted early Monday morning from Washington. He also called on the Federal Reserve to "act so that countries, of which there are many, no longer take advantage of our strong dollar by further devaluing their currencies."

Formal notices of the tariffs were not immediately announced by the Treasury or Commerce Departments or the Office of the US Trade Representative. Both Brazil and Argentina were exempted from 25% steel and 10% aluminum tariffs last year when Trump was attempting to avoid a trade war with those countries.

Brazil's President, Jair Bolsonaro, said Monday that he has an "open channel" of communication with Trump, according to state news agency Agencia Brasil.

Bolsonaro said he would meet with Brazilian Finance Minister Paulo Guedes Monday to discuss the issue and make a call to Trump if needed.

"There was no sign given to our government, to the Brazilian government or to the public sector that there would be a change in the deal with the United States," Dante Sica told state-run news agency Telam on Monday.

Sica said he met with Foreign Minister Jorge Faurie after seeing the tweet in order to "analyze the course of action" and told Telam that he had contacted the US Embassy in Argentina, as well "all contacts in Washington DC" to get more clarity on the situation.

The President's decision amounts to retaliation against two countries that have served as alternative suppliers of soybeans and other farm products to China, grabbing market share away from American farmers, a key constituency the President will need to win reelection in 2020.

But Bolsonaro contended during a radio interview on Monday that he doesn't view the tariffs as retaliation.

"Their economy does not compare to ours, it is 10 times bigger than ours. I don't see this as retaliation, I'm going to speak to him to see if (Trump) doesn't over penalize us," Bolsonaro said. "I'm certain he will be open to the conversation."

Trump has prided himself on imposing tariffs and hammering trade deals to bolster his "America First" economic agenda. But the biggest deal at the center of the trade war, a US-China trade agreement, has yet to be signed. Additional tariffs on Chinese imports are expected to go into effect on December 15.

As China, now the world's top steel producer, has ramped up its steel production, US steel jobs have declined. The President has promised to reinvigorate US steel jobs, but last year, the steel industry added 2,400 jobs, an increase of just over 1%. Employment in the industry is still down about 43% since 1990.

The United States has bought more steel from Brazil than any other country besides Canada during the first nine months of this year, making up nearly 11% of all steel imports, according to Census Bureau data. It relies on Argentina much less for steel, which made up less than 1% of imports.

Brazil and Argentina have also benefited from Trump's trade war with China, which has hurt American farmers, in other ways. Brazil is the second biggest soybean producer in the world, and it's where China's farmers have been getting a lot of their soybeans since Beijing imposed retaliatory tariffs on US agriculture. Argentina recently made a deal with China that will allow it to import soymeal starting next year.

In recent weeks, however, Brazil and Argentina have seen the values of their currencies drop. The Brazilian real is down more than 8% against the dollar this year, and the Argentine peso is down 37% as the country wrestles with an economic crisis. That is more than other major emerging market currency, including the South African rand, Mexican peso and South Korean won. The Turkish lira is also down 8% this year.

In its latest report in May, the Treasury Department had noted the US dollar had appreciated against some emerging market currencies, including the Brazilian real amid intensifying economic crises in Argentina and Turkey, but refrained from flagging it as a currency to watch.

During Bolsonaro's visit to the White House earlier this year, Trump announced that the US would be designating Brazil as a non-NATO ally. And recently, a joint communique from the US-Brazil CEO Forum in late November described joint recommendations for enhancing the US-Brazil economic relationship.

The statement on the forum, which was attended by US Commerce Secretary Wilbur Ross and US Director of the National Economic Council Larry Kudlow, did not hint at any changes to the state of Brazil's steel tariff exemption.

Monday's announcement is not the first time that Trump has accused a major trading partner of manipulating its currency in order to win a competitive advantage against the United States. In June, he attacked the European Central Bank for what he said was unfair manipulation of the euro, and has sharply pointed in the past to Japan and China as examples of countries that use monetary policy to pursue "devaluation" in order to gain a trading advantage over the US.

In August, amid tit-for-tat retaliation between the world's two largest economies, Trump directed Treasury Secretary Steven Mnuchin to label China a currency manipulator, ratcheting up fears by investors that a currency war might ensue.