US to phase out young immigrants program 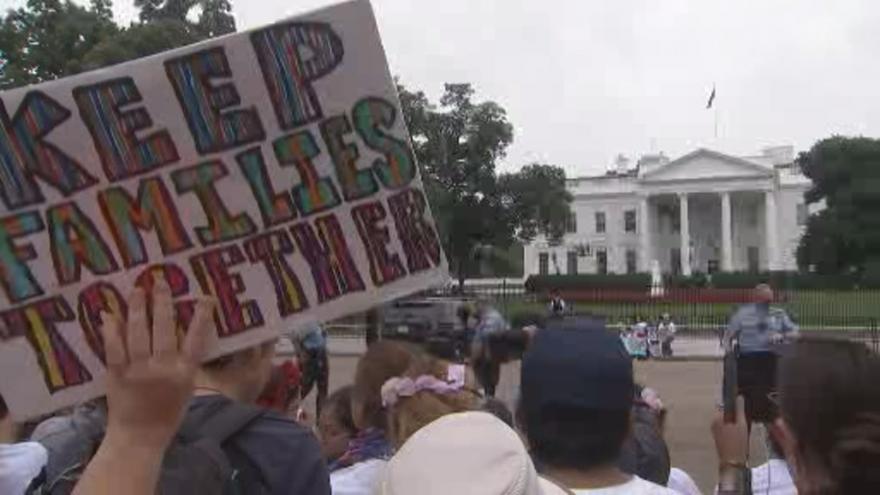 WASHINGTON (AP) -- The Latest on President Donald Trump's decision on a program that shields from deportation young immigrants brought to the country illegally (all times local):

President Donald Trump is defending his decision to phase out a program protecting young immigrants from deportation, saying he is giving Congress a "window of opportunity" to act.
Trump is stressing in a statement that he is "not going to just cut DACA off, but rather provide a window of opportunity for Congress to finally act."

The program created by former President Barack Obama has given nearly 800,000 young immigrants a reprieve from deportation and the ability to work legally in the country.

Trump says he is not in favor of punishing children for the actions of their parents.

House Speaker Paul Ryan says Barack Obama's existing policy for immigrants brought to the country as children was a "clear abuse of executive authority" and now it's incumbent upon Congress to act.

In a statement Tuesday, the Wisconsin Republican says the heart of the issue is "young people who came to this country through no fault of their own."

Ryan says it is his hope that the House and Senate -- with the president's leadership -- will find consensus on a permanent legislative solution to the issue. He says it is important to ensure that those who have done nothing wrong can still contribute "as a valued party of this great country."

House Democratic leader Nancy Pelosi is calling President Donald Trump's decision to end the program protecting hundreds of thousands of young immigrants who were brought into the country illegally as children "a deeply shameful act of political cowardice."

Pelosi also said in a statement that the widely expected announcement on Tuesday was a "despicable assault on innocent young people in communities across America."

The California lawmaker said the decision requires immediate action from the Republican-led Congress, and Speaker Paul Ryan and the GOP leadership must hold a vote immediately to address the issue.
------

The Trump administration has announced that it will wind down a program protecting young immigrants from deportation.
Attorney General Jeff Sessions on Tuesday called the program known as DACA as an "unconstitutional exercise of authority by the executive branch."

He says the Trump administration is urging Congress to find an alternate way to protect young immigrants brought into the country illegally as children.

Sessions says the U.S. needs to have a lawful immigration that "serves the national interest" and the U.S. cannot admit everyone who wants to come to the country.

President Donald Trump will phase out a program that has protected hundreds of thousands of young immigrants brought into the country illegally as children. He will call for Congress to find a legislative solution to protect the immigrants, who are often called "Dreamers."

That's according to two people who were briefed on the plan set to be announced later Tuesday. They spoke on condition of anonymity because they were not authorized to discuss the plans publicly before the announcement.

Trump suggested in an earlier tweet Tuesday that it would be up to Congress to ultimately decide the fate of those covered by President Barack Obama's Deferred Action for Childhood Arrivals, or DACA program.

DACA has provided nearly 800,000 young immigrants a reprieve from deportation and the ability to work legally in the U.S.

President Donald Trump says Congress should "get ready" to take on immigration legislation.

Attorney General Jeff Sessions is expected to announce Tuesday it will end in six months a program that shields from deportation young immigrants brought to the U.S. illegally as children.

The decision to delay the end of the Deferred Action for Childhood Arrivals, or DACA program, would give Congress time to act. But Congress has struggled to act on immigration because of divisions within the Republican party.

Trump tweeted early Tuesday: "Congress, get ready to do your job - DACA!"

Potential battles may lie ahead for President Donald Trump and the Republican Party in the wake of his decision on whether to keep the program that protects hundreds of thousands of young immigrants from deportation.

Some Republicans want to maintain the program while others want it ended. Waiting for the president's decision are those who came to the U.S. illegally as children and in some cases have no memories of their native countries.

Trump is expected to end the Deferred Action for Childhood Arrivals program, but with a six-month delay. Congress could use that extra time to pass legislation that would address the status of the so-called Dreamers.