Trump to make first state visit to UK in June 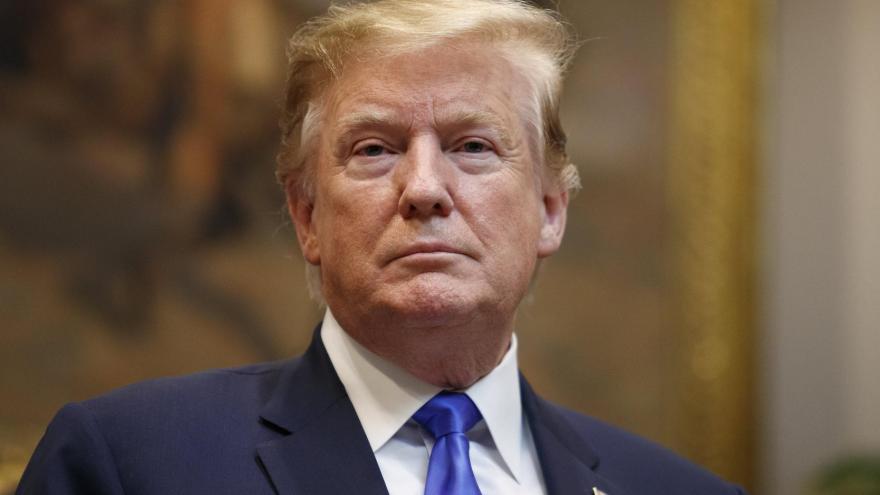 US President Donald Trump will make his first state visit to the United Kingdom in June, more than two years after an invitation was first extended.

(CNN) -- US President Donald Trump will make his first state visit to the United Kingdom in June, Buckingham Palace said Tuesday, more than two years after an invitation was first extended.

The visit will take place from June 3 to June 5, and will involve the full trappings of a state occasion.

Confirmation of the visit is likely to reignite debate over Queen Elizabeth's role in welcoming Trump. His last visit to the UK, in July 2018, was styled as a working visit. It nevertheless prompted huge protests in central London.

This time, the President and First Lady will attend a ceremony marking the 75th anniversary of D-Day at Portsmouth, a naval city on England's south coast and important embarkation site in the World War II operation.

From there, they will travel to Normandy in France on the invitation of French President Emmanuel Macron, to continue D-Day commemorations. Separately, Trump and Macron will also hold a bilateral meeting.

While in the UK, Trump will also hold a meeting with Prime Minister Theresa May, as well as a private audience with the Queen.

Trump's state visit will have similar ceremonial flourishes to that enjoyed by former President Barack Obama in 2011 -- including a formal welcome at Horse Guard's Parade, followed by lunch and dinner at Buckingham Palace -- a royal source told CNN.

However, there will be no carriage procession, and the Queen is unable to host the presidential couple overnight at the palace, due to long-term refurbishment work, the source said.

Visit comes at delicate time for May

The trip will finally make good on May's invitation to Trump for a full state visit shortly after he took office in 2016 -- which prompted 1.8 million to sign a petition in protest.

During last year's trip, the president ruffled feathers in the British establishment after he criticized May's Brexit deal in tabloid newspaper the Sun and praised her recently-resigned Foreign Secretary -- and potential leadership rival -- Boris Johnson as a "very talented guy."

In the interview, Trump said May "didn't listen" to his views on how she should negotiate the UK's exit from the European Union -- an extraordinary criticism of a foreign leader during a trip to that leader's country.

It made for an awkward follow-up press conference at the prime minister's official country house, Chequers, where Trump accused the Sun of peddling "fake news" and offered an apology of sorts to May.

This year's potential state visit is likely to come at a similarly delicate time for May's Brexit negotiations. Her beleaguered withdrawal agreement with the European Union has already been defeated three times in the House of Commons amid deadlock among Members of Parliament.

The country has now been given a six-month extension on leaving the EU -- its second delay to the original March 29 deadline.

If the UK hasn't agreed to pass the withdrawal agreement or come up with an alternative plan by October 31 it will crash out of the bloc without a deal at all.

May isn't the only British leader who has had disputes with Trump, with London Mayor Sadiq Khan making no secret of his disapproval of the president.

When Trump in January last year said he had scrapped his visit to the British capital because he didn't want to open the new US embassy, Khan suggested the real reason was because he wouldn't be welcome.

After being delayed several times, Trump's four-day visit to the UK last year was eventually met with large protests in London and throughout the country.

The capital's anti-Trump demonstrations featured a 20-foot "Trump Baby" blimp that flew outside Parliament -- and given permission to do so by Khan. The mayor also allowed protesters to fly a blimp of himself in a bikini later that year.

Khan, London's first elected Muslim mayor, has previously criticized the US president for his proposed travel ban on citizens of several Muslim-majority countries.

Trump hit out at Khan for his handling of terror attacks carried out in London, seizing on them in his call for the travel ban.

In November 2017, Khan also slammed Trump for retweeting anti-Muslim propaganda from a British far-right party, and suggested May shouldn't welcome Trump into their country for a state visit.