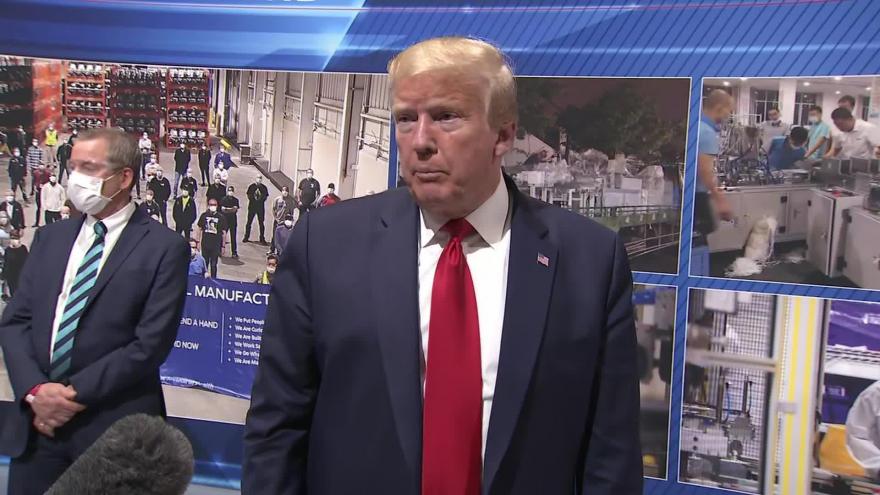 President Donald Trump announced that flags on federal buildings will be lowered to half-staff over the coming days to honor coronavirus victims and members of the military.

(CNN) -- President Donald Trump announced Thursday that flags on federal buildings will be lowered to half-staff over the coming days to honor coronavirus victims and members of the military.

"I will be lowering the flags on all Federal Buildings and National Monuments to half-staff over the next three days in memory of the Americans we have lost to the CoronaVirus," the President tweeted on his way back from a trip to Michigan.

In a subsequent tweet, Trump wrote that on Monday, "the flags will be at half-staff in honor of the men and women in our Military who have made the Ultimate Sacrifice for our Nation."

The move comes after House Speaker Nancy Pelosi of California and Senate Minority Leader Chuck Schumer of New York sent Trump a letter Thursday morning requesting that he order flags lowered to half-staff when the death toll from the coronavirus pandemic in the United States reaches 100,000. The national death toll had grown to more than 94,500 by Thursday, according to data from the Johns Hopkins University Center for Systems Science and Engineering.

"Respectful of them and the loss to our country, we are writing to request that you order flags to be flown at half staff on all public buildings in our country on the sad day of reckoning when we reach 100,000 deaths," the two Democrats wrote. "It would serve as a national expression of grief so needed by everyone in our country."

Former Vice President Joe Biden had made a similar recommendation in April.

"I've suggested the President should lower the flag to half-mast, honoring all those people -- particularly those first responders, those doctors, those nurses -- those folks who went in without the PPP, the protective equipment, and still did their job," Biden said at the time. "And some of them lost their lives. They're heroes. They should be honored as such."

Several Democratic governors have opted to similarly honor those lost to the virus. On Tuesday, Minnesota Gov. Tim Walz ordered flags lowered to half-staff in the state to remember Covid-19 victims, saying the flags would fly half-staff on the 19th of every month for the rest of the year as a remembrance. Govs. Phil Murphy of New Jersey and Andrew Cuomo of New York announced last month that flags would be flown at half-staff in their states for the foreseeable future in honor of coronavirus victims.