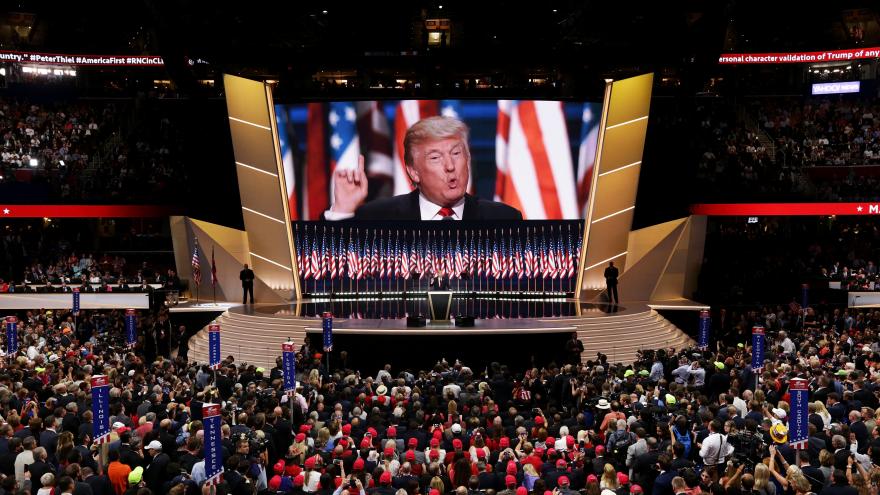 "We are thrilled to celebrate this momentous occasion in the great city of Jacksonville," McDaniel said in a news release. "Not only does Florida hold a special place in President Trump's heart as his home state, but it is crucial in the path to victory in 2020. We look forward to bringing this great celebration and economic boon to the Sunshine State in just a few short months."

Trump will make the speech at the 15,000-person VyStar Veterans Memorial Arena, the release said.

The announcement caps a weeks-long row between Roy Cooper, the Democratic governor of North Carolina, whose team had been working to keep the convention in Charlotte despite coronavirus fears, and Trump, who refused to let the caution of health officials stop Republicans from having a fully attended convention.

Because the party signed a contract to hold the convention in Charlotte, they are obligated to hold some portion of the convention in the North Carolina city. But the announcement now guarantees that this year's Republican convention will be unlike any other in modern history, where delegates officially elect their nominee in one location, while the nominee accepts the nomination hundreds of miles away.

By selecting Jacksonville to host the marquee Republican event of the summer, the Trump campaign is making a big investment in another critical battleground state.

If Republicans stick to the schedule they previously planned, Trump will deliver his acceptance speech on August 27 in Jacksonville. That day marks the 60th anniversary of the brutal beating of black activists protesting segregation that came to be known as "Ax Handle Saturday," because the nearly 200 white attackers, according to the Florida Historical Society, used ax handles and baseball bats to beat the black demonstrators.

In 2016, Trump carried Duval County, which includes all of Jacksonville, by slightly more than 1 percentage point --- but neighboring St. Johns County by more than 30 points. The stretch of northeastern Florida is deep red Trump country, where the campaign believes they can expand their margins to help win Florida, which is crucial in building a path to 270 electoral votes.

The Republican National Committee executive committee paved the way to the announcement on Wednesday night when they unanimously approved a plan to significantly scale down the convention proceedings that will take place in Charlotte and to make no changes to the party's 2016 platform. The vote significantly pairs down the official business with each state and territory only sending six delegates to the gathering, for a total of 336 delegates where there would have been over 2,500.

The delegates, regardless of whether they are physically present in Charlotte, will be able to vote for both Trump and Vice President Mike Pence's nomination via proxy, but only the six present delegates in Charlotte will be able to vote on other convention business, according to the rules. All delegates who would have been invited to the convention, the spokesperson said, will be invited to Trump's acceptance speech.

Jacksonville Republicans had pitched the site as the best big city venue where Republicans control both city and state government.

"This is Trump country here. This is the single best city in America, in which to host the Republican National Convention, and for several reasons. It's a battleground county in a battleground state, in a city where you have unified Republican governance," Duval County Republican Chairman Dean Black told CNN.

Jacksonville Mayor Lenny Curry, the former chairman of the Florida Republicans and one of the few big city Republican mayors, pitched his city as the next convention host on Twitter last week and Florida Gov. Ron DeSantis, a Republican who talks to the President regularly, told Fox this month that the state was ready to host the event.

"We'll be able to make those decisions about what precautions need to be taken as you get closer, but to just rule out a convention at this stage, I think, is a mistake," DeSantis said. "So we've said we want to get to 'yes' on it, and I think you'll be able to do it."

Yet this week, Curry was heckled with chants of "No RNC! No RNC!" as he marched with peaceful protestors after he announced the removal of a Confederate statue across from City Hall. Curry patiently listened to the heckling, which were overtaken by shouts of "Black Lives Matter." He repeated that rallying cry over and over, becoming a rare Republican elected official to openly declare: "Black lives do matter!"

After reports indicated that Jacksonville was a leading candidate to host Trump's acceptance speech North Carolina Democratic Party spokesman Austin Cook, said in a statement, "If the President is genuinely delusional enough to think that demanding a full-scale convention is reasonable, then Jacksonville is more than welcome to host his acceptance speech."